Video: Smarmy neo-Nazi Nick Fuentes gets kicked out of CPAC, brags AFPAC doesn't 'have homosexuals speaking on the stage' 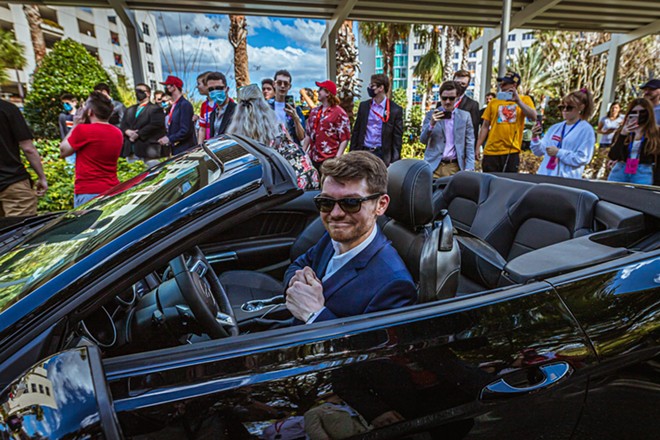 photo by Dave Decker
Smarmy neo-Nazi and dirtbag homecoming king Nick Fuentes was kicked out of the Hyatt Regency Orlando today, where he was attempting to start a commotion on the CPAC floor.

Fuentes, a Holocaust denier and cartoon frogophile, last gained attention as one of the speakers at the Jan. 6 rally at the U.S. Capitol followed by the insurrection. He's in Orlando hosting AFPAC, the annual gathering of his America First Foundation.

AFPAC is for those who find CPAC too mainstream, too wishy-washy. Speakers this year included Michelle "SJW Hollywood feminists turned Prince Harry into a woman" Malkin and Rep. Paul "I want Biden's concession on my desk tomorrow" Gosar. Apparently they were done trading Pepe cards and singing rounds of "Tomorrow Belongs to Me" or ran out of CapriSuns or something, so they wandered over to CPAC for a playdate.

photo by Dave Decker
Nick Fuentes + America Firsters being removed from CPAC
Fuentes, who looks like what would happen if you put Matt Gaetz in a tofu press, didn't put up much of a fight when sheriff's deputies moved in and asked him to leave for (of course) not wearing a mask. After crowing, "I knew this would happen — I didn't even park my car," he strolled out trailing a gaggle of slackjawed apostles.

Once he got to his car, he gave an impromptu (or seemingly impromptu) America First stump speech to the dozen or so deeply redpilled bystanders, exhorting them to attend AFPAC next year.

"At AFPAC, we don't wear masks. At AFPAC, we don't have homosexuals speaking on the stage," Fuentes boasted, to cheers. He then launched into an impassioned pro-Christianity spiel, in a sort of douchebag Elmer Gantry moment. Maybe his next move will be a megachurch? He and Paula White would probably get along like a house on fire.