Photo courtesy City of St. Petersburg/Facebook
Armed men showed up at a St. Pete early voting site on Wednesday claiming to be with the Trump campaign.

Pinellas Supervisor of Elections told WFLA that two men dressed as security guards set up a tent outside the polling location at 501 First Ave. N., and told officers they were with the Trump campaign.

After officers took down their information, the two individuals left the polling site, stating that they'd return on Thursday.

While speaking to the press on Thursday morning, Pinellas County Sheriff Bob Gualtieri said the pair were from the security company Syotos, out of Crestview, FL. He also stated that there were no allegations of intimidation, just reports that “people didn’t like it.”

Creative Loafing Tampa Bay reached out to Syotos owner Trei McMullen, who claims one of his employees was there, but not in an official capacity.

"We do not have any employees engaging in poll watching," said McMullen to CL. "We had an off-duty employee who was picking up a family member who happened to be in the vicinity of a polling location. The employee saw someone they knew near the polling location and had a short conversation. Again, this employee was off duty and was in no way engaging in poll watching. The employee was stopped by a local deputy that had every right to ask what was happening. The employee made it clear that they were not affiliated with the polling booth. Exchange of information from the officer to the deputy happened and all information came back valid and true. The officer just had on their gear from leaving work and that was taken out of context." 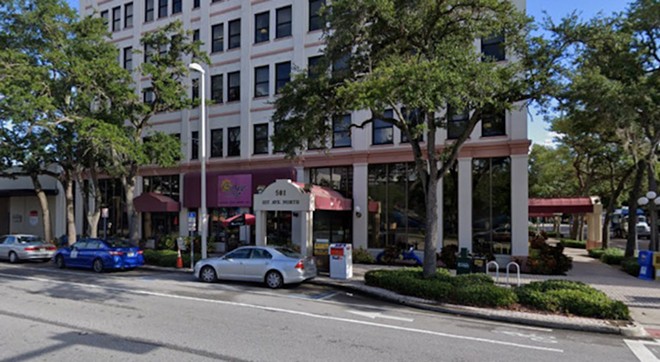 While people have a 150-foot buffer from the entrance of a polling location to advocate for candidates, it is a third-degree felony to bring a gun to a polling place in Florida. It's unclear how close the armed men were to the polling site.

Gualtieri told reporters that the two men did not violate the law, since the firearms were not brought into the building. He also stated that he has reversed his decision to have officers placed at polling sites because they didn't "want people to feel intimidated or uncomfortable."

The incident comes after President Donald Trump told his supporters at last month’s debate to watch the polls. “I’m urging my supporters to go into the polls and watch very carefully,” said Trump, “Because that’s what has to happen. I am urging them to do it.”

St. Petersburg Mayor Rick Kriseman responded to the incident Thursday morning in a tweet. "Voter intimidation will not be tolerated here," said Kriseman. "Please contact law enforcement if you witness any form of intimidation, including the presence of armed security guards. Voting in Pinellas County is safe. It always has been. We will ensure that remains the case."

This is a developing story.