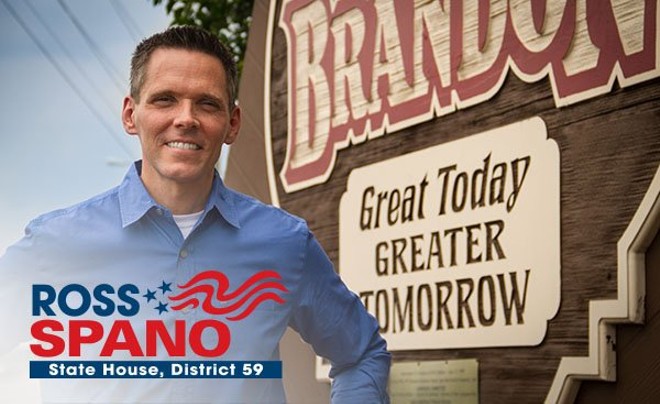 Photo via Ross Spano/Twitter
State Rep. Ross Spano, a Republican who just two days ago filed a bill to declare pornography a public health crisis in Florida, appears to have "liked" a pornographic tweet from his account.

If you take a spin through Spano's nearly 500 likes on his Twitter account you'll see that it's mostly a collage of his personal interests, like FSU football clips (his alma mater), Bible verses, and typical GOP-related content about how Islam is bad for 'Merica.

There's actually a term for this, and it's called Ted Cruz'n yourself.

Spano's bill claims that pornography is contributing to the hyper-sexualization of children and teens because it serves as their "main source of education regarding human sexuality." The bill also says it promotes kids developing "low self-esteem, … eating disorder[s] and a desire to engage in dangerous sexual behavior."

"Recent research indicates that pornography is potentially biologically addictive, resulting in the user consuming increasingly more shocking material to satisfy the addiction," the bill says. "Pornography has a detrimental effect on families and is linked to a reluctance to enter into marriage, dissatisfaction in marriage and marital infidelity."

The claims in his bill have also been thoroughly refuted, and little to no research backs up any of it, which makes you wonder why it's even being presented in the first place.


Obviously, I have a long social media history on Facebook, Twitter, and Instagram since I was first elected in 2012. With a thorough examination of my accounts, it will be easy to see that this is not my doing. I have since gone back, once notified, and rectified the problem. And I’m now looking into how it occurred in the first place.

In addition, referencing my prior statement, I don’t believe any of this takes the focus off of the fact that there is a direct correlation between pornography and a host of societal problems, including human trafficking, exploitation of children, sex slavery, and domestic violence.