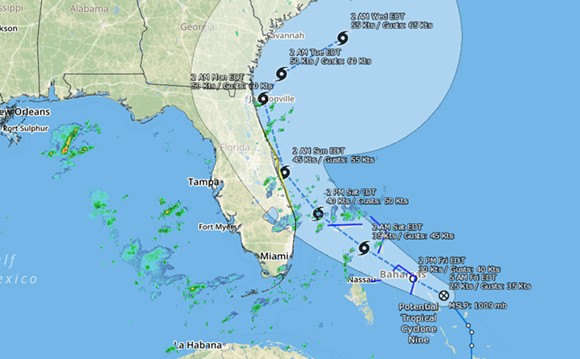 Image via NHS
The predicted "cone of uncertainty" for the path of Potential Tropical Cyclone Nine, as of 7:30 a.m. Friday
The National Weather Service is tracking an upgraded tropical disturbance in the Atlantic that will likely create a rainy weekend ahead in Central Florida.

Thursday's tropical disturbance, now called "Potential Tropical Cyclone Nine," is currently 140 miles southeast of Great Abaco Island in the Bahamas, moving northwestward toward the northeastern Bahamas at 6 mph. A tropical storm watch is in currently effect for the Jupiter Inlet to the Flagler-Volusia county line, which means tropical storm conditions are possible there within 48 hours.

NWS expects the system to pick up speed as it moves through the weekend. It's anticipated to move across the central and northwestern Bahamas Friday, and along or over the east coast of Florida over Saturday and Saturday night.


Here are the 5 AM Friday, September 13 Key Messages for Potential Tropical Cyclone #Nine. The Tropical Storm Watch for the east-central coast of Florida now extends from Jupiter Inlet to the Flagler-Volusia County Line. https://t.co/57Tck7DFVc pic.twitter.com/07r8XkkUn8

The system will be named Humberto if it reaches tropical storm strength, as the NHS predicts it will likely do by Saturday. An Air Force reconnaissance plane is en route to the storm to investigate.