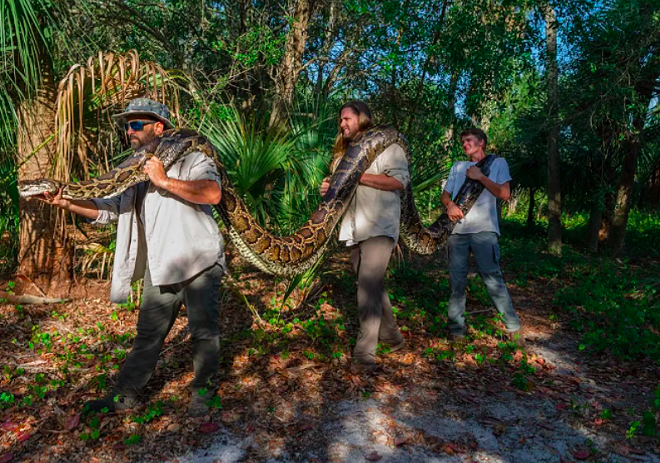 Lured with a much smaller snake as bait, trackers recently bagged the largest invasive Burmese python ever caught in Florida—weighing  a massive 215 pounds and measuring nearly 18 feet in length.

The female snake, which was 30 pounds heavier than the previous record, was captured in the western Everglades last December by python hunters with the Conservancy of Southwest Florida, reports National Geographic.

Besides its impressive length and weight, the snake was shockingly large in just about every way. The widest part of the snake's body measured 25 inches, and its head (from snout to the neck) measured nearly six inches.

According to the Florida Fish and Wildlife Conservation Commission, most Burmese pythons average around 6-9 feet in length. However, the snakes can grow as long as 20-feet, though specimen of this size have never been recorded outside of their native Southeast Asia habitat.

The new record-smashing predator was captured by using what's called a male "scout snake." Snake hunters attach GPS tracker implants into the snakes, and then re-release them into the wild to help lure the larger reproductively active females from hiding.

The scout snake used in this particular instance, nicknamed "Dion," was 12-feet long and was found near Naples coiled up in an intense wrestling match with the giant she-snake.

According to the Conservancy, Dion survived the ordeal and is still serving as a scout snake.

A necropsy of the female snake found a 122 egg "follicles," the most ever found in a female, as well as clumps of bone, fur and hoofs, indicating the animal's last meal was probably a white-tailed deer.

Florida’s Burmese python problem is believed to stem from people releasing them as unwanted pets, which has resulted in decreased mammal populations and increased competition for food with natives like alligators and endangered Florida panthers.

"These pythons have the ability to totally alter the ecosystem, and I would say they probably already have," said Kristen Hart, an ecologist with the U.S. Geological Survey Wetland and Aquatic Research Center to National Geographic.

It's unknown exactly how many pythons are currently in Florida, but so far around 15,000 have been killed or removed from the Everglades since 2000.