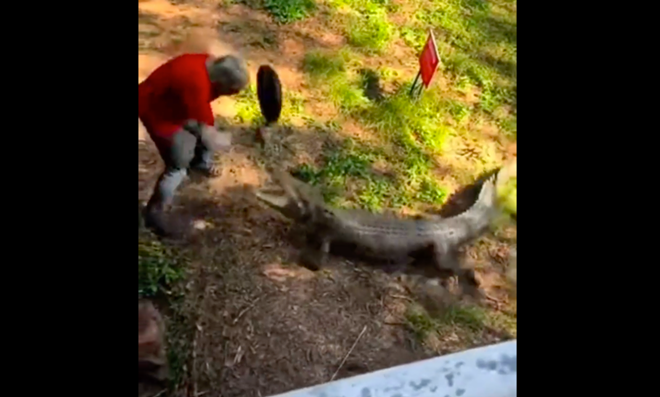 Despite having all the common traits of a classic Florida-based news story, a recently shared viral video of an old man clapping an angry crocodile in the head with a frying pan was not shot in Florida, or even in the U.S. for that matter.

The video, which was shared widely across various social media platforms earlier this week, shows a crocodile charging at a man who then casually smacks it repeatedly with non-stick cookware.

"They built different out in Florida man. Hitting a Gator with a cast iron skillet is nuts," said Twitter user @Notdojaa, whose post of the video now has 8.5 million views, and nearly 60,000 retweets.

The video was actually shot in Australia, also known as the world's Florida, at an animal sanctuary called Goat Island, just off the coast of Darwin.

The man in the clip is the owner, Kai Hansen,  who recently told Australia's ABC that a male croc was trying to move in on the territory of a local female crocodile that is somewhat of a showpiece at the island, so, naturally, he whacked it with a frying pan.

They built different out in Florida man. Hitting a Gator with a cast iron skillet is nuts 🤣 pic.twitter.com/VbN9pXioCB


"He decided to have a go at me, and it happened so quick you don't have time to think, you just do what you have to do," said Hansen.

Of course, the video very well could've been from Florida. After all, Florida is the only place on Earth where alligators and crocodiles share the same habitat, and residents have been known to confront these apex predators with everyday items like trash cans.