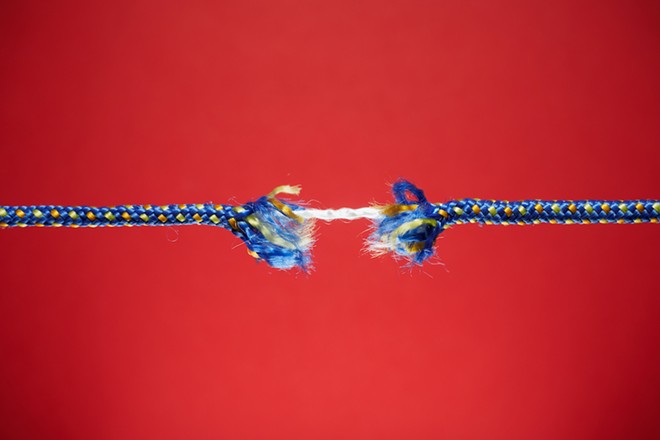 Brothers and sisters aren’t speaking to each other. Golf foursomes have been permanently scratched. Political activists have screamed themselves hoarse.

A bitterly divided nation is teetering on a political powder keg as millions of voters head to the polls on Election Day, with the near certainty that partisan discontent will intensify as ballots continue to be counted long past midnight Tuesday.

President Donald Trump and Democratic presidential nominee Joe Biden made their final pitches to Americans on Monday, as the Republican president amplified demands that the results of the 2020 election be finalized on Election Day.

“No one should underestimate the language he uses and how effective it is with his supporters, and how close this race is, right down to the wire,” Kevin Sheekey, senior adviser to billionaire Michael Bloomberg, told reporters during a press call Monday. Bloomberg, who ran briefly for president, has spent more than $100 million in efforts to get Biden elected in Florida.

While Florida and some other states could begin processing and tabulating mail-in ballots before Tuesday, elections officials in other key states can’t start opening and counting mail-in ballots until Election Day. Voting experts have warned for months that the historic number of requests for mail-in ballots amid the coronavirus pandemic could leave election results in limbo for days, if not weeks, in some areas.

Trump repeatedly has linked mail-in voting with fraud, though he seemed to be focusing on states unlike Florida, which requires voters to request mail-in ballots from elections officials.

Florida Democrats go into Election Day with a lead in votes cast, thanks to a huge advantage in voting by mail. But Republicans outnumbered Democrats at early voting sites and are expected to further shrink the gap with in-person voting Tuesday. Recent polls show Biden and Trump in a toss-up in the Sunshine State, whose 29 electoral votes are considered crucial for a White House victory.

“Trump took a fraught moment, poured gasoline on it, and now he’s playing with matches.”


The candidates are close or tied in a number of other battleground states, including Pennsylvania, where mail-in ballots could take days to tabulate after polling places close Tuesday night.

The Trump campaign on Monday continued to fuel distrust in the elections system, issuing a statement that accused Democrats of trying to “delegitimize” Election Day results by prolonging the ballot-counting process.

“Democrats are panicking because Joe Biden has not run up a large enough lead in early votes in battleground states and they know that President Trump’s in-person votes on Election Day will make up the difference and propel him to victory,” Trump 2020 deputy campaign manager Justin Clark said in a prepared statement.

When asked about reports that Trump plans to prematurely announce a victory Tuesday night, Biden said Sunday that the president “is not going to steal this election.”

The rhetoric escalated after a caravan of Trump supporters on Friday surrounded a Biden bus on a Texas highway and Trump supporters blocked traffic on highways in New York and New Jersey over the weekend.

Federal law enforcement officials said they were investigating the Texas incident, but the president praised his supporters in a Tweet on Sunday.

“In my opinion, these patriots did nothing wrong. Instead, the FBI & Justice should be investigating the terrorists, anarchists, and agitators of ANTIFA, who run around burning down our Democrat run cities and hurting our people!” Trump tweeted to his 87 million Twitter followers.

Fervor over the candidates also boiled over outside early voting sites in South Florida, with Trump loyalists deploying megaphones and Biden backers countering with cowbells and sirens. Police were called dozens of times to deal with clashes, according to a South Florida Sun Sentinel report.

While the partisan antics in Florida so far appear to be expressions of enthusiasm for the candidates, civil-rights organizations are warning that paramilitary groups are preparing for what some fear might be a violent uprising if the president does not win re-election.

Trump has warned that the election would be “rigged” if he does not win a second term in the White House, and drew widespread criticism following a recent debate for telling the white nationalist group known as the “Proud Boys” to “stand back and stand by.”

The president has “whipped his supporters into a frenzy,” Lindsay Schubiner, director of the Western States Center’s Momentum Program, told reporters during a news conference late last week.

“Trump took a fraught moment, poured gasoline on it, and now he’s playing with matches,” she said.

Tuesday’s election is viewed as a “critical flashpoint” for activists on the far right, according to Southern Poverty Law Center senior research analyst Cassie Miller.

“From the perspective of the far right, Election Day is really perceived as the culmination of months of widespread mobilization,” Miller said.

The president could further erode the public’s tenuous trust in the democratic system of governance, experts caution.

“If you look at how democracies crumble around the world, it begins with demonizing your opponent. … You attack the free media, and that goes beyond saying they’re biased. And the last bastion of that is to attack the very mechanism by which we ensure we have a democracy, which is our voting system. And the nonstop attacks on the electoral process itself denigrates our democracy,” Tallahassee-based political consultant Steve Vancore told The News Service of Florida.

But other experts say the United States’ democracy is resilient.

“The loudest voices often don’t represent the most people. And I think we spend a fair amount of time covering the squeaky wheel,” Florida Atlantic University political science professor Kevin Wagner said in a phone interview Monday. “The vast majority of people are going to vote. They’re not going to protest. They’re not going to put out signs.”

As a candidate, Trump — a real estate developer who became a household name with a hit TV series called “The Apprentice” — is unusual, Wagner acknowledged.

“It’s typical in this country that both candidates try and work pretty hard and distance themselves from the voices that are speaking against participation, against voting, that talk about extra-legal remedies. Unfortunately, this time around, we’ve seen politicians give voice to that. And that is different. And that is a bit destabilizing,” he said.

The country has had turbulent times in the past, Wagner pointed out.

“The fact that some of the comments challenging our democracy are coming from the White House and the president does make this a very different kind of circumstance than is typical. However, one measure of people’s faith in the system is their participation in it,” he said, adding that voter turnout is expected to reach or surpass historical numbers. “So people are participating, which suggests that people do believe that their votes count and matter. And that’s not a sign of a bad democracy. That’s a sign of a good democracy.”