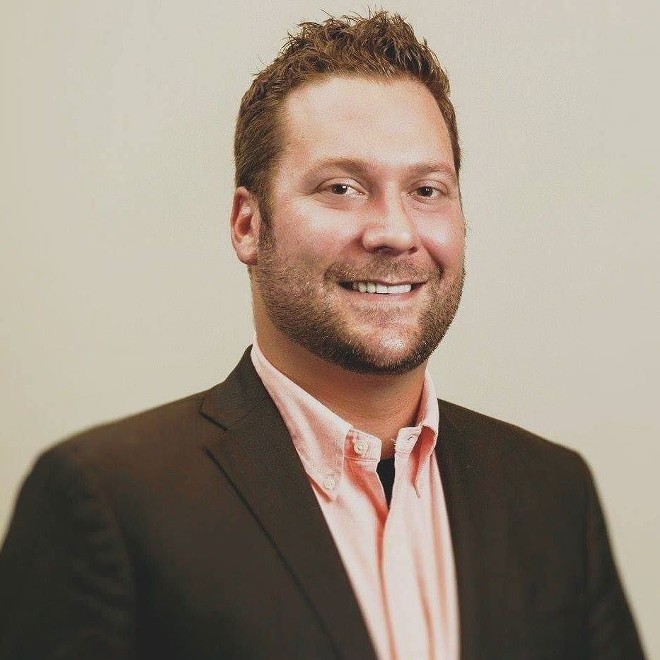 Photo via Seminole County Tax Collector
Seminole County residents are calling for the resignation of tax collector Joel Greenberg after he posted an Islamophobic Facebook "question" and proceeded to wonder why people aren't more tolerant of his bonehead, racially charged posts.

"Very simple question... Name just ONE society in the developed world that has benefited in ANY WAY from the introduction of more Muslims. Just one. Asking for a friend," said Greenberg.

After an onslaught of public backlash and refusing to apologize, Greenberg sarcastically posted to his Facebook, "Ah the religion of peace and the party of tolerance." He signed off with, "Vote republican. #maga"

Of course, Greenberg says he posted his initial question because he was literally "asking for a friend," and by no means was he using the phrase in the historically accepted sarcastic usage.

To take Greenberg literally means that the concept of Googling this question and discovering that Muslims are responsible for things like coffee, hospitals, algebra, libraries, etc, was something that never occurred to Greenberg, a man who is tech-savvy enough to introduce Bitcoin as an accepted form of payment for Seminole County residents.

But this isn't the first time Greenberg has done something idiotic. He once pulled over someone for speeding with his tax collector badge, and on another occasion tried to get out of a speeding ticket by saying he was the tax collector. More importantly, Greenberg has a long history of airing his political views on social media, specifically about the Muslim community.

Following the 2017 bombings in Manchester, Greenberg posted to his Facebook, "This is the reality of unchecked Muslim immigration." This post has since been deleted.

Ignoring the fact that Greenberg "likes" his own posts, this statement appears to pose an argument for a religion-based travel ban, which was something deemed unconstitutional by multiple circuit judges.

In another very on-brand post, Greenberg advocates for the use of "radical Islamic terror," a xenophobic term denounced by Trump's own national security advisor, and that has been used to blanket the entire religion of Islam as "terrorists."

In another post, Greenberg simply says "Borders..Language..Culture," a statement that may sound familiar to anyone advocating for a white ethnostate.

Here's a Twitter "like" from Greenberg saying we should "thank a muslim" for their role in "female genital mutilation." Again, this is something Greenberg could've have easily Googled and discovered that FGM isn't unique to the Islamic community, and Christians also take part in this terrible practice.

Greenberg also surrounds himself with a questionable crowd, to say the least. In October of 2017, he posted two photos to his Twitter account, showing himself with InfoWars contributors. 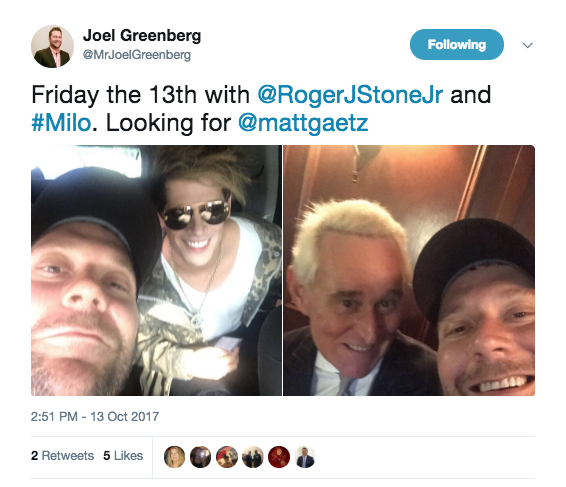 In one photo Greenberg is with Milo Yiannopoulos, who stepped down in disgrace from Breitbart for saying relationships between "younger boys and older men" could be beneficial; he is known for statements like "Islam is AIDS."

In another photo from the same post, Greenberg is seen with former Trump advisor Roger Stone, a central figure in Robert Mueller's investigation into Russian interference in the 2016 general election, and a conspiracy-theory peddler who once claimed a Clinton aide was connected to the Muslim Brotherhood.

Greenberg hasn't backed down since his post last weekend. In fact, he's still going. This morning he retweeted a post from Neal Boortz, the "friend" he was doing the Islamaphobic question-asking for, which claims there's no such thing as "Islamophobia" because fearing Islam isn't irrational.

Of course, Greenberg told Orlando Weekly that he is no bigot, and that he actually has a "Muslim friend."

On a very related note, there's currently a petition calling for the tax collector to immediately resign.