Savage Love: My wife did ‘something’ to my best friend in a hot tub, then proposed we ‘even the score’ 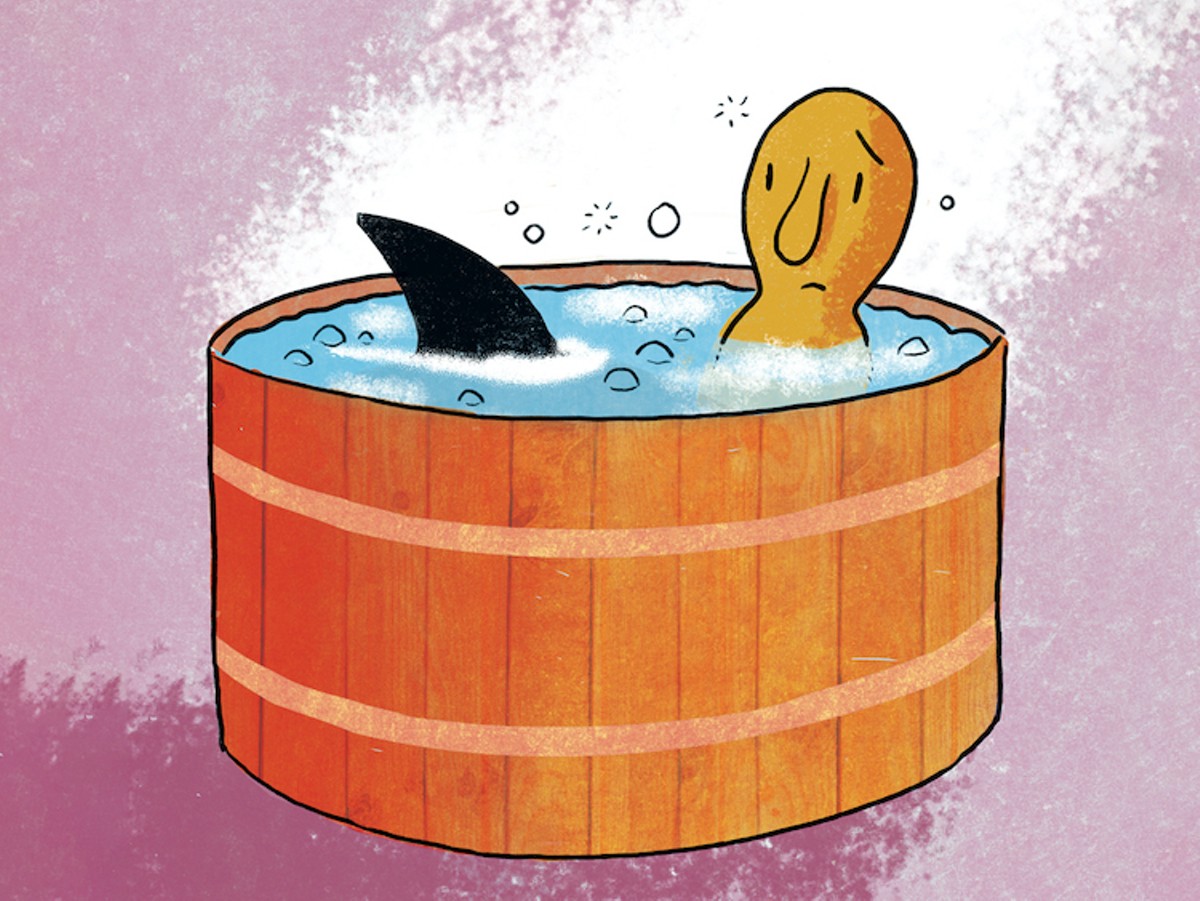 'In the Straights' illustration by Joe Newton

Dear Dan: My wife got drunk at a vacation house we rented with a bunch of friends and cheated on me with my best friend in the hot tub. They didn't have sex but they did other things. I wasn't there, but there were eight other people in the hot tub and the jets were on, so no one else saw what was going on "under the water." My wife told me about it afterward and I was hurt but also kind of excited. She proposed we "even the score" by asking my friend and his wife to have a foursome. They agreed but the experience was miserable. My wife and my friend were very into each other and my friend's wife was willing, but I was having a hard time enjoying myself with a woman I had no interest in while my wife did things for my best friend that she would never do for me. She let him come in her mouth, which is something she never lets me do, and she did it right in front of me. Now she says she will do that for me but only if she can keep doing it for him. This seems deeply unfair. We have kids and I don't want to get divorced, but I'm concerned that I'm going to keep getting hurt if I stay. What can I do? I need ...
Help Overcoming Terrible Worries About This Entire Relationship

Dear HOTWATER: Hmm. I'm not convinced events went down as described, or that your wife went down as described — hell, I'm not convinced your wife exists. There are just too many "unwilling cuckold fantasy" tropes in your letter, HOTWATER, from your wife cheating on you in the most humiliating way possible (with your best friend and in front of other friends), to your wife doing things for another man that she won't do for you (and doing those things in front of you), to the sexual blackmail your wife is now subjecting you to (she'll allow you to come in her mouth on the condition that your best friend gets to keep coming in her mouth). And the presence of an inert-bordering-on-houseplant best friend (did he have nothing to say to you?) with the equally inert wife (did she have no reaction to being rejected by you?) don't make your question seem any more credible.

But on the off, off, off chance there is a wife, there was a vacation house and something happened in a hot tub ... if you can't make a credible threat of divorce, HOTWATER, then you're fucked. Your wife wants to dictate terms and set conditions — conditions like you'll only get X from her (X = coming in her mouth) if she gets to do X with someone else — and if her behavior at that vacation house is any indication, HOTWATER, she's going to X around with other guys whether you like it not.

You can tell her she's not allowed to do anything like that ever again — you can insist on strict monogamy — but having seen what she's capable of, under and over the water, will you ever feel comfortable letting your wife out of your sight again? Will you ever be able to leave her alone with your best friend Groot again?

If the thought of your wife cheating turned you on, HOTWATER, you might be able to make this work. And perhaps it does turn you on. You said you were excited when your wife first confessed what she'd done in that hot tub with your best friend, but things went south during the foursome you had to "even the score." Maybe you don't want the score to be even? If the thought of a "deeply unfair" one-sided open relationship turns you on — if the thought of getting to come in your wife's mouth, say, one time for every 10 times your best friend gets to come in her mouth — then you should think about sharing that information with your wife. It could be the start of something big — it could be the start of an invigorating sexual adventure — or it could be the beginning of the end.

But seeing as the end seems inevitable anyway ... why not go down swinging?

Dear Dan: I spent two years with a man I thought I would marry. Then he lost his job in Italy, where we lived, and COVID-19 made it impossible for him to find another job, so he returned to his home country. I would have done the same if I were in his place. I spent the last five years getting my degree and I'm a woman who is working in my field, and I wouldn't give that up to follow a man to another country. But his decision to go nevertheless broke my heart. Two months later he changed his mind and wants a future with me in Italy. We decided to meet in August to discuss our future and in the last three weeks we have exchanged so many messages of love. Then, classically, I met someone else. I explained my situation to him — that I'm going on holiday with my ex and that we are talking about getting back together — and he appreciated my honesty and said that enjoying the moment is more important to him than thinking about the future. A week later we slept together. The problem is that I'm still in love with my ex and I want him to return to Italy and be my boyfriend again. But I can't erase my feelings for this new man. This is a difficult situation and it's hard to talk about it, even with my friends. Do you have any suggestions?
Messy Emotions, Sensitive Situation

Dear MESS: You and your ex-boyfriend are still exes, which means you're free to do whatever/whoever you like. Same for your ex, MESS, and for all you know he has dated and/or fucked another girl or girls and those experiences helped him realize you were the one he wanted. If he's the one you want — and if you, like most people, are only allowed to have one — then you'll have to end things with Mr. Enjoying The Moment when your ex returns or isn't your ex anymore, MESS, whichever comes first. That's assuming Mr. Moment is still in your life at that point. Mr. Moment could wind up exiting your life just as quickly as he entered it, e.g., he could ghost on you tomorrow, or you could discover something about him next week that dries you up. But even if you ultimately have to end things with Mr. Moment because you're getting back together with your ex — if you have to end things with Mr. Moment for that reason and no other — you don't have to erase your feelings. You can be sad about that ending and happy about picking things back up with your ex at the same time.

And just a little heads up: "Have you been seeing anyone else?" is a question exes often ask each other when they're thinking about getting back together. You can and should answer that question truthfully, of course, but you don't have to go into detail. "I briefly dated someone" is an honest answer and enough of an answer.

Omitting the part about how you crushed hard on the other guy isn't dishonest, MESS, it's considerate. I mean, if it turns out your ex dated someone else that he really, really liked while he was in his home country, would you want him to tell you that?

Dear Dan: I'm a straight, cis man in my late 20s and recently met a hot kinky woman my age on a kink/hookup app. We've had two meals together and six awesome fucks, all at my place. We're on the same page about this being casual. She's never mentioned anything about being married but I'm pretty sure she's either married or recently separated. Instagram and Facebook make it clear that until at least two months ago there was a husband in her life. I don't care if she's single or married or separated, but I wonder if I should mention to her that I'm aware her life is a little more complicated than she's let on. If there's a chance she's stressing about the (possible) deception, I could save her the stress. Do I tell her what I know?
Knowing Me, Knowing You

Dear KMKY: That hot kinky woman could be cheating on her husband or recently divorced or recently widowed. Whatever's going on, KMKY, she's had lots of opportunities to open up to you about her life — six amazingly awesome fucks, two hopefully delicious meals — and she's chosen not to. Sharing details about your life might inspire her to open up about hers, KMKY, but telling her you've been lurking on her social media — particularly if she didn't share her handles with you — could piss her off. That said, I don't blame you for checking out her Instagram or Facebook accounts. It's natural to be curious about the people you're fucking. And it's weird when people post things to public social media accounts and then get upset when someone they're fucking — technically a member of the public — sees those posts. But the willingness of a new sex partner to demonstrate that they respect our privacy, maybe even a little more than we respect our own, can go a long way toward establishing trust. And not bringing up what you may have seen on the social media accounts of someone you've only recently met or started fucking demonstrates tact.

And finally, KMKY, kink might have something to do with why this woman hasn't opened up to you about other parts of her life. Some kinky people prefer play partners who don't know the mundane details of their everyday lives — for some, being known only as a Dom or a sub or an AB or an LG or a no recip oral cum dump latex gimp makes it easier to step into their fantasy role. If that's the case with this woman, KMKY, knowing you know what you know about her — and learning how you came to know it — might wind up disqualifying you as a friend and ruining you as a play partner.