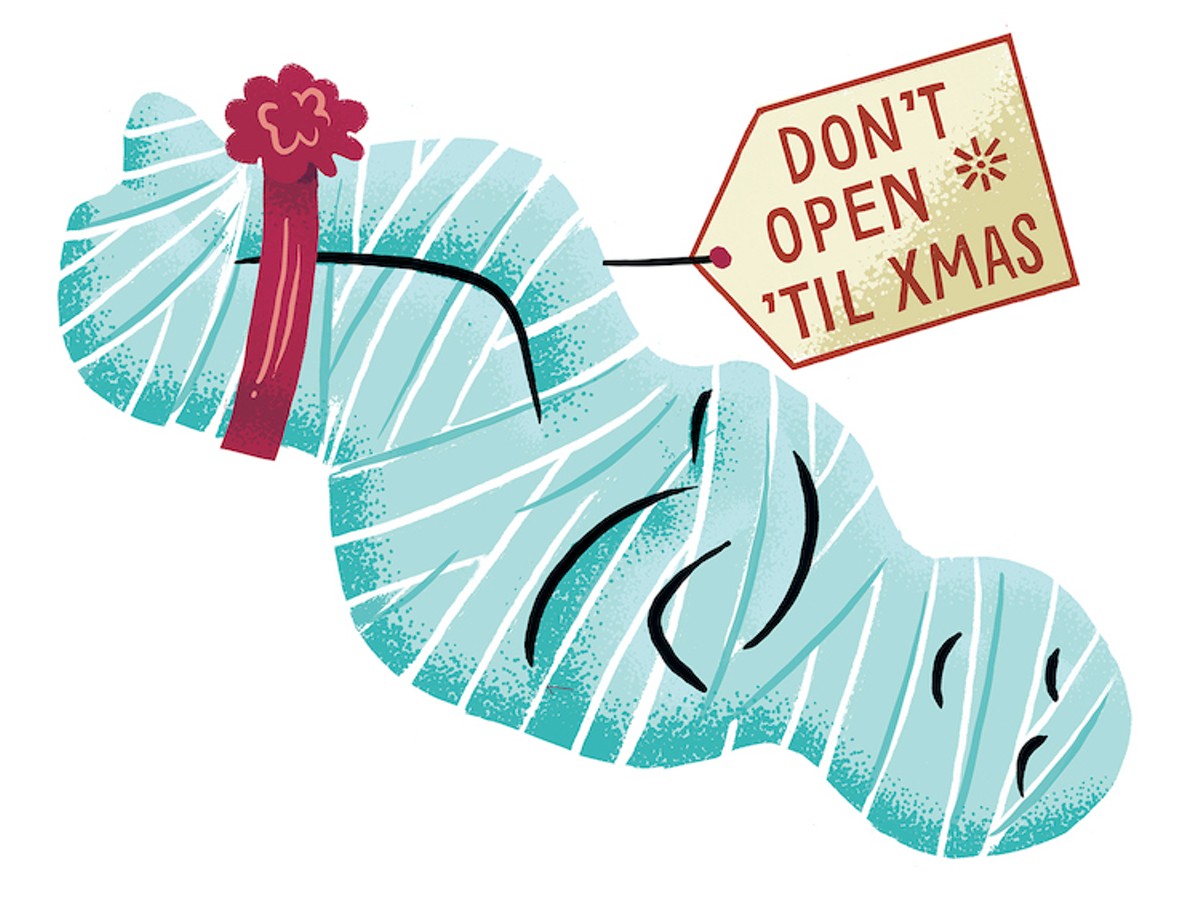 Dear Dan: I'm extremely kinky, with an emphasis on extreme. To give an example, I love long-term and extremely restrictive bondage. (Think full-body casts or getting locked up for an entire weekend.) I'm a 32-year-old straight man who has been married for five years. In the last year we opened up our marriage because my sexual desires were putting too much of a strain on the marriage. My wife is incredible, and we do many wonderful kinky things together, but I needed more. More frequency, more intensity. Since then I've seen some other women, but looking around, I came to the realization that gay men have all the fun! I often see these incredibly intense sexual experiences that I so desire in amateur gay porn or on various gay men's fetish profiles. I think men have a higher propensity to pursue these kinds of things.

I've been talking to a guy who shares a very similar set of kinks, and it's been great. He showed me Recon, which has opened a whole new world up to me. I'm struggling right now. It's like a battle between my identity as a kinkster/fetishist and my identity as straight. I think the former is going to win, but certain things concern me. I don't know if I'll feel repulsed to have, say, a dick in my mouth. And I don't want the poor guy that I play with to have to deal with my own internal psychological drama. I grew up in a very rural area that was extremely homophobic. I was bullied and called a faggot constantly. I've just recently been feeling less shame about being kinky and now there's this whole other level of shame that I am scared to contend with. Am I silly for considering doing stuff with men even though I'm a lot more attracted to women, just in order to fulfill these kinks?
— Brooding Over Unmet Needs Daily

"I was really worried that if I played with men that meant my identity had to change too," says Heavy, looking back at that time in his life. "But seeking out other genders to play with doesn't necessarily have to change your identity."

Heavy's identity ultimately did change — he now identifies as queer — but he wants you to know that your identity doesn't have to change. "I view bondage the same as getting together with friends for a round of golf, or shooting hoops, watching a movie or game together," says Heavy. "I've had many bondage encounters that involved sex, but I've had even more that were simply about the bondage itself."

"BOUND just needs to be direct about what he's looking for when he reaches out to the guys he might like to play with," says Heavy. "He needs to have the same conversations he had with his wife about limits, comfortability levels and intentions. And if someone's pushy about certain things that he's unsure about, then they're likely not the right person for him."

Bondage tops on Recon with the kind of gear required to put you in truly restrictive bondage will most likely have heard from other straight and/or straight-identified guys who were in it for the bondage, not the sex. If simply getting to tie you up isn't enough — if a gay bondage top isn't interested in a bondage-only scene with you — he'll decline to play with you.

"The most important thing is to find good and genuine people to share these kinds of experiences with," says Heavy. "Bondage is inherently dangerous, especially when you're the one being put in bondage, and it requires a lot of trust. BOUND needs to make sure he's putting his trust in the right people."

So, how do you know if you're interacting and negotiating with and possibly playing with the right kind of guys? In addition to trusting your gut — always trust your gut — check their references. If you're meeting bondage tops on Recon, you can send messages directly to the guys listed as friends on their profiles. Someone with a lot of friends (and a lot of original play pics) is a much safer bet than someone with no friends or pics, BOUND, but if you're tempted to play with someone without friends listed on his profile, ask to be put in touch with other men he's played with. If he refuses, BOUND, don't play with him.

"The gay men I played with when I was still identifying as straight were generally very respectful," adds Heavy. "I did have a few experiences where my limits weren't respected. But thankfully I'm OK and I learned from those experiences."

And Heavy wants you to know that there are women out there who are into intense bondage.

"It's a myth that only men play to the level BOUND is interested in playing at," says Heavy. "Though I've had many incredible experiences with men, I've met just as many women that wanted to lock me up in the most serious forms of restraint you could ever imagine."

Dear Dan: As we come into the holidays, I am dreading having to spend time with my sibling-in-law. They are fake, self-absorbed and delusional. At family dinners, they always serve themselves first. They don't wait until everyone is served before starting, and they are often finished before everyone else is served. They chew with their mouth open and talk with their mouth full. They talk about themselves constantly. They are rapidly approaching middle age and have never held a full-time or permanent job. As far as anyone knows, they have never been kissed or even on a date. At first, I tried to cut them some slack. They are sheltered and don't really have any friends. Recently, I have taken to muting them on social media so that I don't have to see their insipid posts. I have also started skipping events with my partner's family, but I feel guilty when I do this. Also, I feel like it would be inappropriate to tell my partner how I feel.

So, what do I do? Continue to suck it up, or further distance myself and risk hurt feelings for being absent? Or do I come clean with my partner and risk hurting them? I don't know what I would expect them to do other than offer me absolution for missing events.
— In-Law Lacking Substance

Dear ILLS: If someone has terrible table manners — if someone chews with their mouth open — don't you want them to serve themselves first and finish before you sit down to eat? As for the rest of it ... it's hard not to feel sorry for your sibling-in-law, ILLS, but it's easy for me to feel sorry for them because I don't have to watch them chew or listen to them talk about themselves. And while avoiding your sibling-in-law this Christmas would be pretty simple (just plead Omicron), I don't see how you can avoid seeing your partner's sibling in the future — seeing and tolerating and, perhaps, finding some pity in your heart for them.