Savage Love: ‘I’m worried about killing my husband while indulging his kink’ 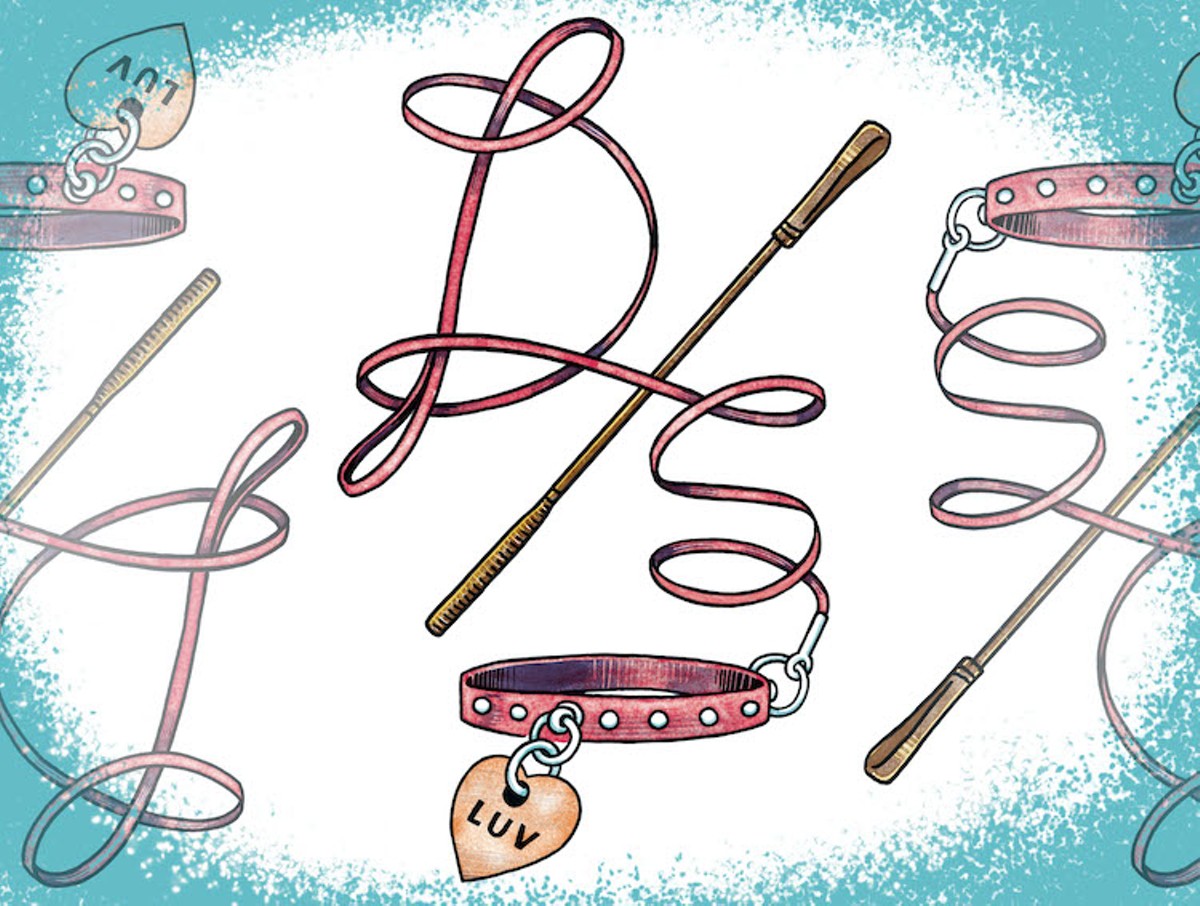 Dear Dan: I’m a married gay man. I’m nervous about sending this question and my husband is afraid you might answer it. I’m a fairly vanilla guy, while my husband is into bondage. We’ve been able to make it work because he’s into a kind of bondage he calls “storage.” On “storage nights,” I put him in bondage and play video games while he “suffers.” So far, so good. But I worry about accidentally killing him. Most often I put him in his sleepsack — picture a leather sleeping bag you can’t get out of — which is strapped to a bondage board on the floor by our couch. I play video games for a few hours with my feet up on him. Every half-hour, I tighten the straps. Toward the end of the night, the straps are so tight he can’t move or even take a deep breath. If he doesn’t complain or ask to get out, he’s rewarded with a hand job when I’m done. We do this about twice a week. (We also have a leather straitjacket, but we use it a lot less often.)

I’m worried that he’s going to have an embolism or something because of the straps. Some go over him and around the board, pressing him down to the board, others go around his body and cinch in. The straps aren’t tight at first. But for the last hour they’re fairly tight, and for the last 20 or 30 minutes they’re almost unbearably tight. I never leave him alone. If it matters, he’s in his 40s, in great shape, normal blood pressure, etc. He didn’t want me to write, because he doesn’t want to find out it’s dangerous and have to stop. For the same reason, he doesn’t want to ask his doctor. We’ve been doing this for 10 years and I haven’t killed him yet. Is there a chance I might? Can you ask a doc for me?
—Seeking Advice Concerning Kinky Dangers

P.S. It feels crazy to say this, but “storage nights” are special couple time for us and an important part of our intimacy. I don’t want to give them up any more than he does.

Dear SACKD: “Hours-long bondage and restraint raises a few concerns,” said Dr. Seth Trueger and Dr. Ryan Marino, both doctors who specialize in emergency medical care. (They read your question and shared their thoughts in an email they composed together.) “First, however long you’re tying someone up, having some sort of safe word or action-equivalent alarm system of some kind seems prudent.”

If your husband is gagged when you store him, SACKD, a one-two-three pattern of grunts can be used in place of a safe word.

“For a mix of reasons, restraining people prone — on their belly — can be particularly dangerous,” said the docs. “We know this from both patient safety research and examples from law enforcement. That doesn’t mean tying people up on their backs is always safe, but tying someone down on their belly is worse. There’s also a known link between unexpected deaths and compromising the airway and breathing.”

So, don’t strap your husband face-down on your bondage board, don’t put anything around his neck or otherwise restrict his air intake, and if you haven’t already agreed on a safe word and/or safe grunt and/or safe gesture, settle on one and/or all now.

“Another potential risk from tight restraints would be muscle breakdown potentially causing kidney damage and electrolyte issues (‘rhabdomyolysis’),” said the docs, “so platitudes like ‘stay hydrated,’ i.e., drink plenty of water before and after, is reasonable advice. And physical restraint plus ‘chemical restraint,’ i.e., sedation or intoxication, is a much more dangerous combination, so it’s probably safer to avoid anything like alcohol [when you play].”

“There is going to be some level of risk with immobility and restraint with things like blood clots,” said the docs, and blood clots can cause an embolism, and embolisms can kill. “But it’s doubtful that using straps instead of ropes would make a difference as far as clot/embolism risk, or that a short period of extra tightening — 30 minutes — would be riskier for clots or an embolism or anything other than bruising or other soft tissue injury from direct pressure.”

Long airline flights famously present a risk for embolism — all that time spent sitting on your ass — but flights of less than three hours “don’t raise the risk substantially,” said the docs, “and using straps has the added benefit of being a bit more straightforward to release in a pinch.”

Be aware of the risks, mitigate them as best you can, and you don’t have to give up your storage nights.

“The way our brains work, we get lulled into feeling safe when we do risky things a lot,” said Trueger and Marino. “So it’s important to not get comfortable and then get lax because nothing has gone wrong before. Figure out good safety rules and stick to them. And pay special attention during times of escalation.”

So, when you’ve pulled the straps so tight your husband can barely move — during that last half hour — you should put the game pad down, SACKD, turn off the TV, and focus all your attention on your poor, miserable, suffering-just-the-way-he-likes-to-suffer bondage freak of a husband.

Dear Dan: I’m a 59-year-old, cis, het, kinky Dominant woman. I’ve been in the D/s lifestyle for about 10 years. Last year a younger man found me on Fetlife. We messaged and met for coffee. I was impressed with his maturity and self-awareness. We’ve had a wonderful time meeting about every two weeks to play and explore. During that time we discovered that he really loves pegging. I’ve pegged him several times, and he’s told me he’s slightly addicted to the incredible orgasm he receives when being pegged. One of our D/s rules is that he ALWAYS has to ask permission to come. No matter what we’re doing, he must ask. And he always has. However, the last time I pegged him with my vibrating dildo, I realized he was coming without permission. I said, “Bad boy, you didn’t ask permission!” He was stunned and responded, “What? Am I?” and then shot an even bigger load. We were talking afterwards, and he swears he didn’t know he was coming until I said something. He says he didn’t feel like he was coming until a good five seconds later. Could this be due to prostate stimulation? I’ve never been particularly successful with prostate milking with other subs, so I don’t know. I have no concern that he disregarded our rules. He’s never been a brat in our dynamic. I’ve had other subs lose it without asking and apologize profusely while they’re coming. (Which, I have to admit, I kind of love.) Any insight here?
—My Inexperienced Sub Toy’s Recent Ejaculation Somewhat Suss

Congrats, MISTRESS: You may have finally done it — you may have milked a man’s prostate — but here’s how you can tell for sure: Did that first wave of cum drool out of his dick? Prolonged stimulation of the prostate gland can sometimes cause the prostate to release seminal fluid. But without the contractions that accompany an orgasm, “milked” seminal fluids don’t shoot out, they ooze out. If your sub was already leaking pre-ejaculate, the release of seminal fluids from his milked prostate wouldn’t feel like an orgasm, but like a big release of pre-ejaculate. It wasn’t until the orgasmic contractions kicked in and he started shooting that he could feel himself climaxing. And since the prostate gland produces only 30% of seminal fluid released in a typical orgasm, he still had plenty left to shoot when those orgasmic contractions kicked in. But even if your sub didn’t come without your permission, MISTRESS, he’s still a bad boy and should be punished regardless.

Dear Dan: I’m seeing a woman after nearly a decade of being mostly single. Everything is wonderful; she’s funny, intelligent, creative, ambitious and challenges me constantly. The sex is phenomenal — I’m 50, but she makes me feel 20 years old. She’s also into a fair amount of kink, whereas my sex life up until now has been fairly vanilla. Aside from a couple of drunken threesomes in my bartending days, I’ve had a plain (but satisfying!) sex life. This new situation is very exciting, but also somewhat daunting. We have talked about a number of things — role play, bondage, choking, among others — and I really want to be as good a partner to her as I can be, but I really have no idea how to start. Two other complications: I’m not by my nature an aggressive or dominant person and I abhor violence directed at women. I recognize in my logical brain the difference between violence and consenting kink, but my lizard brain echoes with the voice of my grandmother and father. Any advice? Books, podcasts, etc., where an old dog can learn some new tricks?
— Basic Dude Seeks Mentors