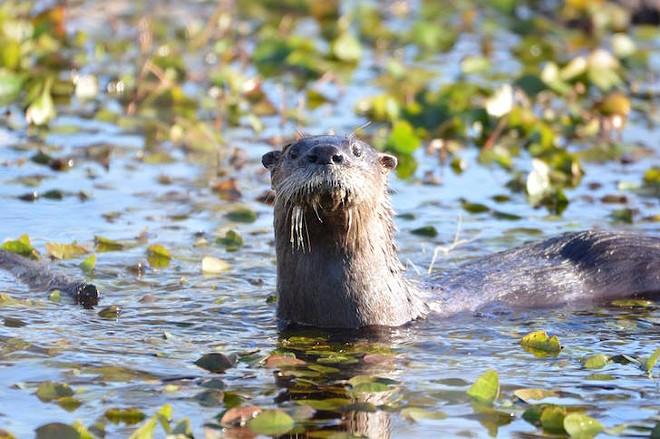 Photo via Florida Fish and Wildlife Conservation Commission/Facebook
Otters in Florida are apparently sick and tired of people paddling down their rivers.

Last weekend, a 77-year-old Florida woman had to get stitches and treatment for rabies after she was attacked by a wild otter while kayaking.

Sue Spector and her husband, Marty, were paddling down the Braden River with a group of 10 people Sunday morning when an otter suddenly jumped into her boat and started to claw and bite her arms, nose and ear, reports Fox 13.

"I heard someone behind me say, 'Oh look, there's an otter,' then I heard somebody screaming and I realized it was my wife," her husband Marty told the station. "My boat turned over and so I was in the water with a paddle, just trying to beat the otter off her back. It didn't want to come off!"

Along with her husband's help, Sue continued to fight off the otter by beating it with a paddle. The struggle also caused her kayak to flip over, leaving Sue neck-deep in the water.

Eventually, the otter loosened its grip and the group's guide, Marsha Wikle, helped the Spectors back into their kayaks. Sue was then taken to the hospital where she was put treated for her wounds and given antibiotics.

Otter attacks aren't that uncommon in Florida rivers. Last weekend, three other reports of people being injured by otters were filed to the Florida Fish and Wildlife Conservation Commission, two of which were only two miles from Spector's attack, reports The Miami Herald.

The Herald also reports that an otter in the same area was spotted getting into it with an alligator on Sunday. However, FWC officials are unaware if the otter survived this encounter.

FWC has responded to last weekend's otter encounters by posting a sign at the river's entrance warning boaters and kayakers to be aware of these aggressive mammals.

It is recommended that anyone bitten by a wild animal should seek medical attention immediately and contact the Florida Health Department at 941-748-0747.

Anyone who notices aggressive behavior in an otter should report to the FWC at 888-404-3922.