Pulse owner says she will reopen nightclub at new location 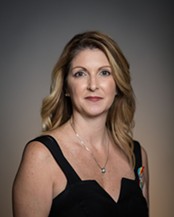 Barbara Poma (photo by Rob Bartlett)
Barbara Poma told WMFE 90.7 News today that she plans to reopen the gay nightclub Pulse, under the same name, but in a different location.

Poma told WMFE's Amy Green that the new club will be similar to the original "because that is what supporters and former staffers say they want when they have gathered at Pulse events since the massacre":


As we reported Monday, Poma decided not to sell the current Pulse location, where the largest mass shooting in modern U.S. history occurred, to the city of Orlando. Rather than selling and allowing the city to oversee the memorial, Poma is still mulling her options. In a statement released Monday, she says that she can’t walk away from a space that means so much to her family and community.

“I feel a personal obligation to ensure that a permanent space at Pulse be created so that all generations to come will remember those affected by, and taken on, June 12,” she said. “I intend to create a space for everyone, a sanctuary of hope, and a welcoming area to remember all those affected by the tragedy.”