A Puerto Rican progressive group is launching attack ads against Gov. Rick Scott for contributing to the hardships faced on the island after Hurricane María by denying climate change.

Alianza for Progress says it is buying television and online ads to call out Scott for "pandering to Puerto Ricans displaced by Hurricane María, a storm exacerbated by a problem he denies exists: climate change," according to a news release. Scott, a Republican, is running for the U.S. Senate against Democrat Bill Nelson. The group also launched a bilingual website called hurricanescott.com.

"Monster hurricanes are on the rise, with three times as many Category 5 storms as 35 years ago," the website states. "Climate change can make hurricanes more destructive. Yet Donald Trump and Rick Scott deny climate change is real. They side with big oil like Exxon and the giant power companies whose products contribute to climate change. Instead of leading the way to a clean energy future, they are stuck in an oil-dependent past." 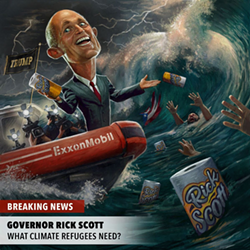 Graphic via Alianza for Progress

The group says it is also calling out Scott for allowing Florida lawmakers to divert $182 million from the Sadowski Affordable Housing Trust Fund to plug budget holes. Since 2003, more than $2 billion has been diverted from the fund, according to the Sun Sentinel. Puerto Rican evacuees who fled to Florida after María have had a hard time finding affordable housing, especially in the metro Orlando area.

"Talk is cheap," the group says on their website. "Trump and Scott have not delivered on promises of housing and jobs for thousands of Puerto Rican evacuees. And they did next to nothing to help Puerto Rican evacuees in Florida or those left behind on the Island. Climate change deniers don't care about you."

In a statement, a spokesperson for Scott's campaign said helping Puerto Rico was "not about politics.

"This is typical negative attacks from Democratic groups," spokesperson  Kerri Wyland says. "Governor Scott has remained committed to supporting the Puerto Rican community and families both here in Florida and in Puerto Rico. He will continue to fight for what matters most to them in D.C."