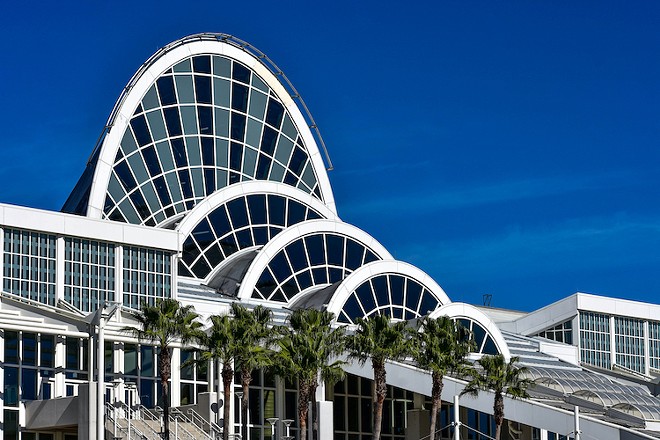 Hundreds of union food service workers at the Orange County Convention Center have reached a tentative agreement with their employer, Sodexo, likely avoiding a strike threat that had been looming over the nation's third-largest convention facility since December.

The tentative agreement reached between Sodexo, a company contracted by the convention center, and Unite Here Local 737 delivers big gains for many of the facility's hospitality workers, per the union, including substantial pay raises for some of the convention center's lowest-paid hourly restaurant, concessions and banquet workers.

The agreement includes a historic minimum wage increase from $13 to $18 an hour this year, “setting a new standard for Central Florida workers,” per the union. Every worker, regardless of what they're currently being paid, would get a $5.50 raise by August 2024 under the agreement, with the first $3 raise retroactive to August 2022.

In what the union described as a “history-making win,” the deal also offers a pension that's fully funded by Sodexo for about 150 full-time workers (out of about 800 Orange County Convention Center workers represented by the union total, including those on call), with two years of retroactive contributions to the pension.

Central Florida's tourism industry hasn't seen a strike in more than 20 years, according to Local 737. But with a higher cost of living, rising rents and high inflation, the workers' union — which also represents Walt Disney World workers — said Sodexo's $13 minimum wage in Orange County was not going to cut it in 2023. 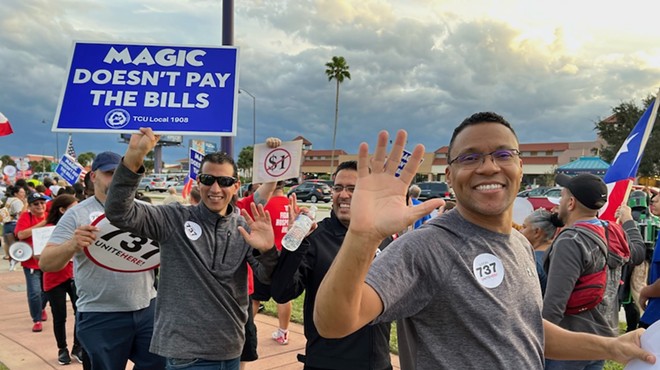 
“I struggle with food, I struggle with my gas, I struggle with my rent,” said Jackeline Ponce, a nine-year veteran in retail and concessions at the Orange County Convention Center during a press call with Unite Here locals across the country in November. Earning just $13.60 an hour, Ponce said, “My co-workers and I are ready to do what it takes to win the contract we need.”

This tentative deal comes on the heels of a unanimous vote by the workers last November to authorize a strike. That vote came after months of negotiations between Unite Here and Sodexo, a global food services and facilities management company that contracts food service work to universities, government agencies, private companies like Google, as well as Walt Disney World, the Orlando International Airport, the University of Florida and Rollins College.

The multinational company has contracts with various Unite Here locals across the United States, but also has a history of union-busting that's led to labor disputes.

Jeremy Haicken, president of Unite Here Local 737, said last year that Sodexo, the nation's largest federal food service contractor, had not only failed to entertain the union's economics proposal for Orange County Convention Center workers' new contract — intended to lift wages for some of the facility's low-wage and, as the Sentinel's Scott Maxwell pointed out, taxpayer-funded jobs during contract negotiations, but had failed to come up with any proposal of their own.

“Frontline workers like these in convention centers were hit really hard by the pandemic, and too often have had to bear the brunt of the many cancellations of events that happened,” said Haicken, during the November press call . “Our members’ families depend on these jobs, and it is essential that Sodexo does better so families in Central Florida don’t have to go without basic necessities.”

The union's last contract with Sodexo (which included a no-strike clause) expired in December. But that contract was extended as the union's bargaining team of convention workers and union staffers continued meeting with Sodexo to hammer out a deal.

Workers prepared for a strike in recent weeks, in the event the company continued to stall or came back to them with a subpar offer.


Sodexo workers are preparing strike signs today in the employee cafeteria at the Orange County Convention Center! We're organizing to win raises and a pension, and we're ready to strike if we don’t get what we need. pic.twitter.com/lCyAILlEM0

Still, while it makes for a grabby headline, a strike isn't ideal for workers. And it's clear Sodexo can afford to pay them something closer to a living wage in a region that has one of the most unaffordable housing markets in the country. Sodexo reported a 21% growth in revenue for the 2022 fiscal year — equal to over $22 billion in revenue, total.

Orlando Weekly emailed Sodexo for comment on the tentative agreement, but as of publication, the company has not provided a response.

According to Local 737, union Sodexo workers at the Orange County Convention Center concluded their vote on whether to approve, or ratify, their new agreement today. Orlando Weekly will have more details later this week.