Photo by Monivette Cordeiro
After meeting with grieving families and survivors of the Orlando mass shooting, President Barack Obama says they "don't care about the politics" and want him to do more to stop the gun carnage.

Obama landed at Orlando International Airport on Thursday and was met by Florida Gov. Rick Scott, Orange County Mayor Teresa Jacobs and Orlando Mayor Buddy Dyer, who gave the president a black T-shirt adorned with a rainbow heart and the words "#OrlandoUnited." The president traveled to the Amway Center to meet with the families of the 49 victims killed and some of the 53 survivors of the shooting at the gay nightclub Pulse, according to White House press pool reports. He also met with law enforcement and elected officials to thank them for their response to the Pulse shooting.
click to enlarge

Photo by Monivette Cordeiro
Obama was later joined by Vice President Joe Biden, and together, they visited the makeshift memorial for the victims in front of the Dr. Phillips Center for the Performing Arts. Obama and Biden placed white roses at the site before the president talked about his meeting with the families.

"Their grief is beyond description," he says, according to White House Press Office transcripts. "Through their pain and through their tears, they told us about the joy that their loved ones had brought to their lives."

The president says he and the vice president told them, "Our hearts are broken, too, but we stand with you." 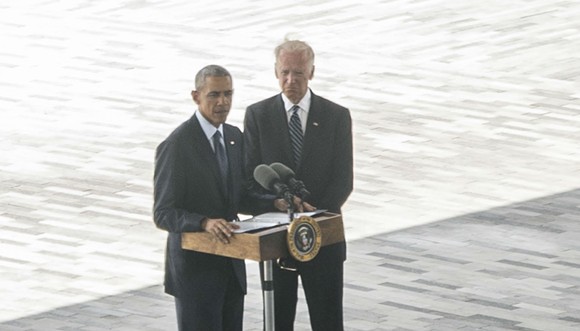 Photo by Ian Suarez
Obama says that while the motives of the Orlando mass shooting gunman were different than mass shooters in Aurora and Newton, "the instruments of death were so similar," and the nation is going to have to take different steps to prevent "lone-wolf attacks."

"Our politics have conspired to make it as easy, as possible, for a terrorist or just a disturbed individual like those in Aurora and Newtown to buy extraordinarily powerful weapons — and they can do so legally," he says. "Today, once again, as has been true too many times before, I held and hugged grieving family members and parents, and they asked, why does this keep happening? And they pleaded that we do more to stop the carnage. They don’t care about the politics."

Obama added that people who defend having easy access to assault weapons should meet and explain that to these and other families affected by gun violence. The president says if elected officials don't act, "we will keep seeing more massacres like this because we'll be choosing to allow them to happen."

Obama ended his remarks by calling Pulse a "safe haven" for LGBT people, including many people from Puerto Rico. The majority of the 49 victims of the mass shooting, which occurred on "Latin Night," were Latino.

"That sanctuary was violated in the worst way imaginable," he says. "So whatever the motivations of the killer, whatever influences led him down the path of violence and terror, whatever propaganda he was consuming from ISIL and al Qaeda, this was an act of terrorism but it was also an act of hate. This was an attack on the LGBT community."