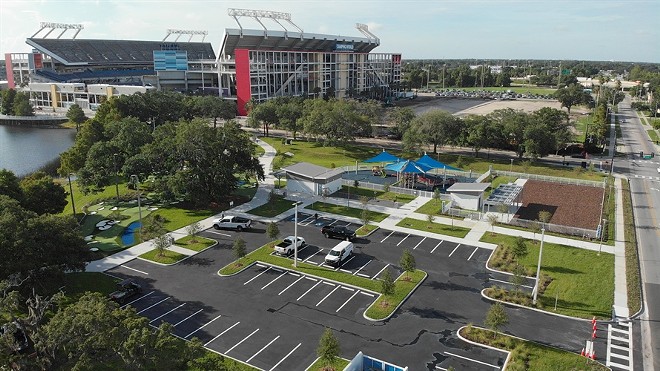 A monument honoring the first interracial Little League baseball game played in the South was unveiled at Lake Lorna Doone Park on Thursday.

The monument called "Barrier Breakers" celebrates a game between the Pensacola Jaycees and the Orlando Kiwanis from 1955. Players who were a part of the historic game were present.

The bronze monument is of two 12-year-old boys, one Black and one white, in uniforms representing the two teams. The kids themselves are about 4.5 feet tall while the monument is a few inches over 6 feet tall, according to Bungalower.

Orlando Mayor Buddy Dyer, City Commissioner Regina Hill were on hand for the ceremony. The monument was commissioned by the  Edward E. Haddock Jr. Family Foundation.

Monument sketch via Edward E. Haddock Jr. Family Foundation
The Barrier Breakers Monument is of two 12-year-old boys, one Black and one white, who played in the first interracial Little Leage baseball game in the South in 1955.

The monument is the final work George Nock, an artist and former NFL player who played for the 1966 Morgan State University football team. The team won the Tangerine Bowl in Orlando and became the first historically Black college team to win an integrated bowl game.

The documentary “Long Time Coming: A 1955 Baseball Story” tells the story of the two teams stepping onto the field together in an act of cultural defiance.

Baseball hall of famer Hank Aaron said in the documentary that being raised in the South, he was only in control of baseball.