More than 7,000 UCF students will descend on downtown Orlando in a month. Are we ready?

This isn't a new park, or a bike trail, or the grand opening of a shopping center. This is a 15-acre college campus, upon which some 7,700 students will descend in almost exactly one month. Classes start Aug. 26 at the new UCF-Valencia downtown campus.

Ready or not, the students, faculty and staff are coming.

And at the moment, says Thomas Chatmon, executive director of the city of Orlando's Downtown Development Board, the to-do list is more like a "scroll."

That includes putting the final touches on the essentials, like infrastructure, parking and transportation, and public safety.

From the infrastructure standpoint, officials are working to make sure students can actually enter the building. The campus is still under construction, UCF officials say.

In an interview July 17, Chatmon said only one place in downtown Orlando's Creative Village – the 68-acre live-work-learn space that will house the new campus – has a certificate of occupancy. The certificate means all the boxes are checked and it's open to the public. At press time – Monday, July 22 – the only place on campus that has one is Amelia Court, a 256-unit apartment complex that aims to serve tenants with a range of incomes. (It opened July 12.)

"The rest of them are still scurrying to reach that, and they have to pass these inspections to insure that they're safe. There's a lot of pressure to that," Chatmon says. "Again, 39 days from now everybody comes, and if you don't have your certificate of occupancy, you can't let them in. It's illegal." 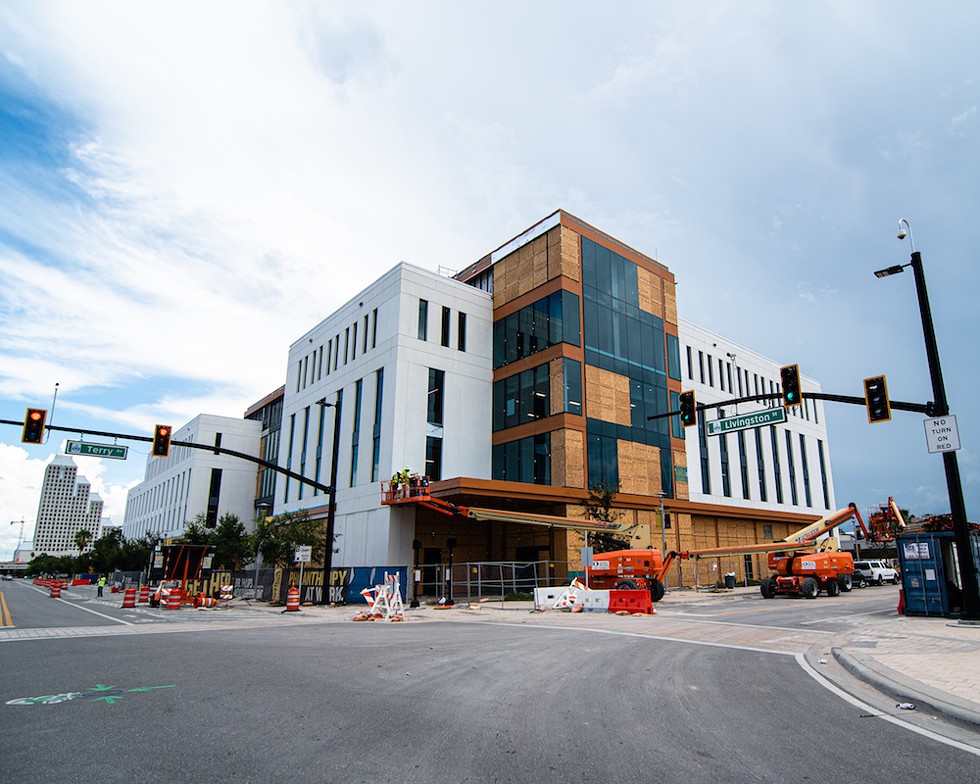 Photo by Matt Keller Lehman
The Dr. Phillips Commons at the new UCF-Valencia downtown campus as it appeared on July 21, a month before classes start.

If time starts to run out, the developments can get a temporary certificate of occupancy, known as a TCO, but that, too, requires passing a certain threshold of inspection tests.

The team of SchenkelShultz Architecture, Robert A.M. Stern Architects and Skanska USA took on development and construction of the major arms of campus, including the "academic core" of the new campus: the Dr. Phillips Academic Commons at 514 W. Livingston St.

Out at the site of the new developments, construction crews were on the job. Cranes parked off Livingston Street stretched toward buildings, where some windows were still unglassed and boarded up.

"We deal with a lot of developments'" says Chatmon. "Those ribbon-cutting dates can be pushed back. ... These 7,700 are going to show up, so we've got to be ready."

Three major buildings comprise the campus. The main organ will be Dr. Phillips Commons, a 148,000-square-foot, four-story structure equipped with a library, classrooms, tutoring and studying spaces, and a moot court for law students.