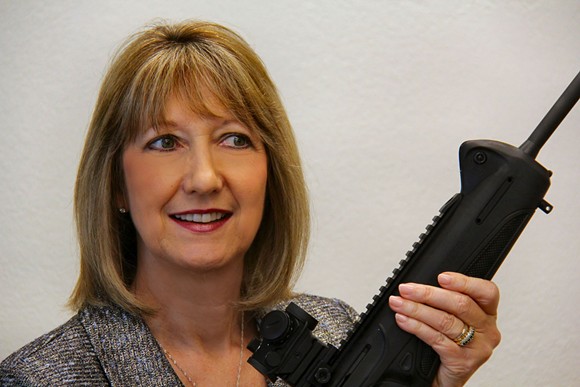 Photo via Anita Staver's Facebook
Not a Glock .45 – just another of Staver's pals, apparently.
After Target announced its transgender customers and employees can use store bathrooms that correspond with their gender identity, Orlando-based Liberty Counsel president Anita Staver said she would be taking her Glock .45 into Target's restrooms, saying the gun "identifies as my bodyguard."

I'm taking a Glock .45 to the ladies room. It identifies as my bodyguard. #BoycottTarget @Target

@bettawerq90 not afraid of them. I want protection from the perverts who will use the law to gain access to women.


CBS News reported earlier this month that the Liberty Counsel has drafted legislation to "protect those who cite religious beliefs for refusing to serve or employ gay or transgender people" in at least 20 states.

"It is only about being free to pursue your faith," says Mathew Staver, founder of the organization and Anita Staver's husband, to CBS News. "We have no interest in discriminating against anyone."

Target's policy was a reaction against the recently passed North Carolina law that stops transgender people from using bathrooms for the gender they identify with and blocks local municipalities from passing nondiscrimination laws. Since the company's announcement, conservative activists have launched a #BoycottTarget campaign, protested outside their local Targets, and as this Daily Commercial story details, planned to have a male conservative blogger "barge into the Mount Dora store Thursday and demand to use the women's restroom."