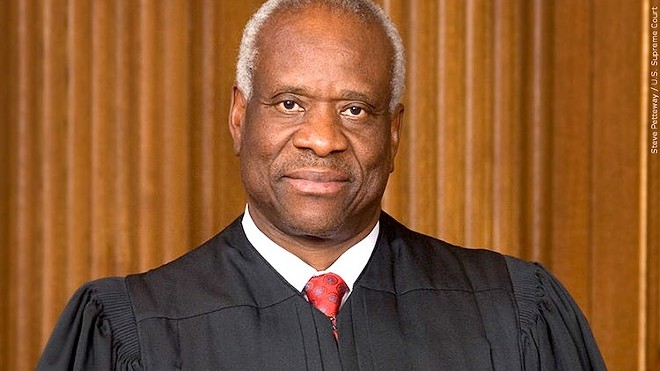 Photo by Steve Petteway/U.S. Supreme Court
Top Republicans say there’s no need for Justice Clarence Thomas to recuse himself from Jan. 6 cases, even though his wife is embroiled in "Stop the Steal" conspiracy.

The unsigned shadow-docket edict was an exercise of raw power. The Court’s conservatives inserted themselves into a conflict between Wisconsin’s Republican legislature and Democratic governor, overruling the state supreme court to achieve the desired result.

This marked the second time the Roberts Court helped Wisconsin Republicans consolidate power. After punting on the legislature’s obscene gerrymander in 2018, the Court, in a 5–4 ruling, decided a year later that partisan gerrymandering is not “justiciable.”

So after the 2020 census, the only thing standing between Wisconsin Republicans and complete control was a Democratic governor’s veto. The stalemate went to the state’s supreme court, which invited submissions while specifying that it wanted districts similar to what already exists.

The court sided with Gov. Tony Evers’ maps. The governor’s congressional map, according to the Princeton Gerrymandering Project, has a “significant Republican advantage,” with Republicans likely to win four to six of the state’s eight seats every election. Evers’ legislative maps, on the other hand, were “fair.”

Guess which one the U.S. Supreme Court let stand.

Republicans argued that Evers’ legislative maps constituted a racial gerrymander because they added an additional minority-majority district in Milwaukee. Not that they raised that issue in state court. The Wisconsin court selected Evers’ maps because they most closely matched the existing ones.

But the Supreme Court said the state court should have an analysis no one asked for. The result: a summary reversal that will lead to less Black representation.

The Wisconsin decision was appalling in another way, too. As a rule — the so-called “Purcell principle” — the Court isn’t supposed to upend elections already in progress. Wisconsin’s primary is Aug. 9. Last month, the Court reversed a court order to block Alabama’s racial gerrymander. The three and a half months until Alabama’s primary was not enough time to draw new maps, the Court’s conservatives ruled.

Four and a half months in Wisconsin is just fine.

Then again, candidate filing in Wisconsin begins on June 1, the candidate petition process starts on April 15, and the state elections commission told the Court that “any delay” beyond March 15 “would increase the risk of errors.” Whatevs, the Court ruled eight days later.

It’s hard to look at what happened in Wisconsin and Alabama and not draw the conclusion that the rulings were outcomes in search of justifications. It’s especially hard to do that in light of the Court’s recent moves to gut abortion rights and overturn vaccine mandates.

This is nothing we don’t already know. The Supreme Court has always been a political entity, and this iteration is proving more ideological — more activist — than its predecessors by orders of magnitude. The Court’s legitimacy — already strained from the ruthless tactics Mitch McConnell employed to get Amy Coney Barrett and Neil Gorsuch onto the bench and the shamelessness Republicans displayed during the Brett Kavanaugh hearings — reached its breaking point.

That was before we knew that Ginni Thomas, the wife of Justice Clarence Thomas (pictured above), is a fucking nutjob. And not just any fucking nutjob, but a fucking nutjob connected to the Trump administration as it plotted a coup.

Last Thursday, the Washington Post and CBS News reported that they had obtained 29 text messages from Ginni Thomas to White House chief of staff Mark Meadows in the days after the 2020 election: “The majority knows Biden and the Left is attempting the greatest Heist of our History,” she told him.

“This is a fight of good versus evil,” Meadows, one of the most powerful men on the planet, said a few weeks later. “Evil always looks like the victor until the King of Kings triumphs.”

To recap, then: The wife of a Supreme Court justice, who apparently belongs in a rubber room, pleaded with the president’s top aide to illegally overturn an election, and that justice tried to stop those communications from becoming public. Top Republicans — including House Majority Leader Kevin McCarthy — say there’s no need for Justice Thomas to recuse himself even from Jan. 6 cases, let alone resign in ignominy.

None of this is serious. These aren’t serious people, and they don’t care if the public views the Court as illegitimate.

So what if Americans think the justices are a bunch of political hacks, so long as they’re their hacks?