Judge Ketanji Brown Jackson defended some bad people. Republicans think that should keep her off the Supreme Court

In defense of public defenders 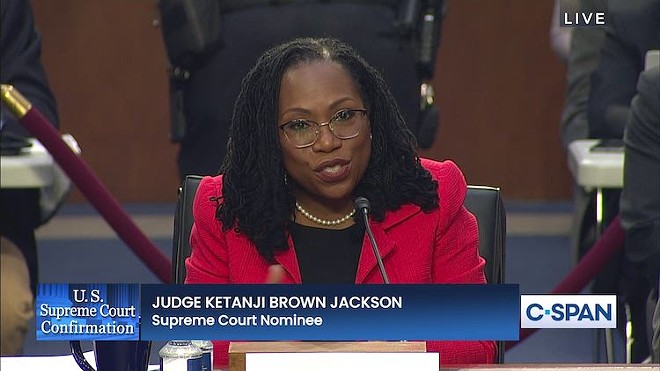 This claim collapses upon even cursory inspection, of course. But Hawley isn’t trying to build a serious case against Jackson’s nomination. He’s winking to the QAnon weirdos who are already convinced that Democrats are inherently pedos while also making the kinds of outrageous statements designed to garner media mockery, thereby earning him cancel-culture whiny-time on Fox News. (Apparently, his ilk now has the support of the New York Times editorial board, which evidently believes that the real danger to free speech is people facing societal consequences for their speech.)

Aside from Hawley, the GOP’s initial attacks on Jackson have mostly ignored the nominee herself, focusing instead on grievances past — Robert Bork and Brett Kavanaugh topping the list of allegedly mistreated Supreme Court nominees. Inevitably, though, most if not all of the Republican caucus will find a way to vote against the confirmation of the first Black woman justice for reasons other than her being a Black woman.

On Monday, during the first day of her confirmation hearings, Sen. Marsha Blackburn of Tennessee telegraphed the play. Not only did Blackburn wonder aloud if Jackson’s “hidden agenda” is to “let violent criminals, cop killers and child predators back to the streets” and incorporate critical race theory into the legal system, but she also criticized Jackson for being a public defender: “You used your time and talent not to serve our nation’s veterans or other vulnerable groups, but to provide free legal services to help terrorists get out of Gitmo and get back in the fight.”

The racism isn’t subtle, but subtle has never been Blackburn’s style. It’s likely most Republicans will shy away from — or at least be more oblique in their — race-baiting. But Jackson’s time as a federal public defender, from 2005 to 2007, will give them license to link her to all manner of purported villains and label her — as Senate Minority Leader Mitch McConnell has put it — “soft on crime.”

Take, for instance, Khi Ali Gul, who was detained in Gitmo after the Bush administration classified him as an enemy combatant — wrongly, Gul says, and without due process. She appealed his detention as illegal. (In 2014, Gul was repatriated to Afghanistan.) The Republican National Committee has argued that Jackson’s “advocacy for these terrorists” went “beyond just giving them a competent defense.”

Like all public defenders, Jackson didn’t have a say in which cases she was assigned. No matter. As the Times reported, Republican senators have been gearing up for this fight during hearings for appellate nominees who also handled indigent cases, criticizing them for, well, doing their jobs too well. Sen. Ted Cruz lectured one that she had “devoted your entire professional career to representing murderers, to representing rapists, representing child molesters.” Hawley pointedly asked another if she regretted getting a man off death row.

The idea, apparently, is that only the wealthy deserve decent representation? The poor and marginalized, on the other hand, should get steamrolled, and it’s somehow immoral for their lawyers to try too hard.

Again, this is not a serious argument — at least from a legal or constitutional perspective, as Hawley and Cruz, both graduates of Ivy League law schools, certainly know. The criminal justice system is inherently adversarial, and adversarial systems don’t work if one side is the Washington Generals.

Rather, this is political theater. It’s less about the Supreme Court than the midterms, or 2024. Republicans know that the Biden administration has probably locked up all 50 Democrats; they’re playing to their base, trying to one-up each other in opposition to the whatever they define as the “radical left.”

But if in the process of point-scoring, Republicans cast aspersions on the integrity or ethics of public defenders, that will become a much larger problem.

Like anyone who has reported on courts, I can attest to the fact that public defenders are woefully underfunded. And while sometimes they defend bad people (who have the same Sixth Amendment right as any defendant), just as often they defend people with drug addiction or mental illness or those facing severe sentences for minor crimes. Sometimes they defend the actually innocent. But in every case, they serve a vital function — to protect the rights of those who would otherwise be steamrolled.

That’s as true for a corner dope dealer as it is for an enemy combatant in Gitmo.

The reality is that the legal system is a machine — inhuman and cold. Elected district attorneys want to look tough. Police chiefs want people to think they’re keeping the city safe by locking people up. No one cares about the endless stream of poor people who move through the system like cogs in a machine.

To undermine the people who look out for them is to erode the safeguards that force the government to abide by the rule of law. That’s a slippery slope that won’t end well for anyone.