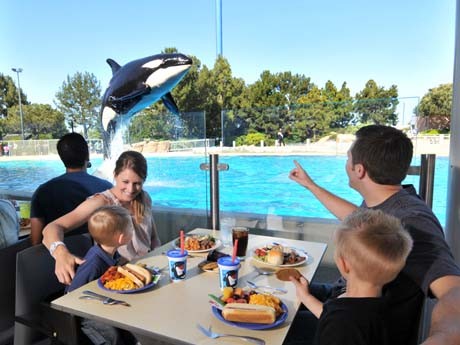 Photo via SeaWorldParks.com
While most of the focus at SeaWorld Orlando has revolved around the new roller coaster  (details on that will officially be announced on May 28) other improvements to the park are also in the pipeline.

The carnival games area near Shamu Stadium recently closed and were quickly demo’d. The former games area will be replaced with a small dining outlet focused on pretzels. Earlier this week SeaWorld did confirm that the long rumored pretzel café will open later this summer.

It’s believed that this new pretzel focused restaurant will be a counter service with a small grab and go section. A similar pretzel focused restaurant, called Twisted Tails, opened at Busch Gardens as part of Pantopia, the new colorful land anchored by Falcon’s Fury. Twisted Tails is known for its bacon wrapped pretzels and large craft beer selection. SeaWorld’s pretzel shop will likely include a similar mix of local craft beers and specialty pretzels.

Outside of the pretzel shop a new landscaped plaza will help open up this former bottleneck while also helping to provide new areas for future special events. The shop will have tower like vibe similar to the new Boathouse restaurant that recently opened at Downtown Disney. The area will have a more lush landscaping than before while also helping to address some previous bottleneck issues that were caused when shows and events near the games area would let out.

As previously mentioned, SeaWorld has announced a new roller coaster that will be the longest, fastest and tallest in Central Florida. More details on that 2016 attraction will be released later this month.