"We, speaking in the most general possible sense, will sit and watch the most idiotic BS in the world," says Richard D. Colvin, curator of the Maitland Art Center. "But how can you miss it … all that barrage? It's like driving by a car wreck."

That an attraction to the lowbrow lurks within us all is something that Colvin, the artist, accepts. And Colvin's puzzlement over the state of art comes through in his exhibit of brand-new mixed-media works, Little Pictures, Big Ideas, which opened June 14 at Comma Gallery and continues through July 8. The artist's dark side comes through too, which will appeal to those of us who look at the world with the light switch off.

Colvin, 47, is a painter and printmaker, and both are evident in his work. Each piece in this collection is set within a shallow, unfinished pine box (as we all will be, eventually). Some of the boxes hold simple but striking paintings, rich in color and brush technique. Others are more contemporary juxtapositions of paintings and collage, such as "Idols," which features a trio of media-weary images of William Hung, George Bush and the Numa Numa dance. Similarly inspired, "You're Fired" features Donald Trump in all his TV glory; "Beauty Is in the Eyes of the Beholder" captures a patch-eyed Dale Chihuly. All of them pack a punch line.

For local resonance there's the piece titled "Peanut Butter & Jamali." (For those not in the know, Jamali is the Pakistan-reared, highly marketed Winter Park artist known to collectors and neighbors for his outdoor, in-the-nude paintings done in a meditative state.)

"No, it wasn't intended to be subtle," says Colvin, a Rollins College alumnus who worked for almost 20 years at the Cornell Fine Arts Museum before moving over to the Maitland Art Center in 1997. "I'm asking questions about how the nature of the art market affects our concepts in the aesthetic area. Is something more beautiful because it is expensive? Is it more valuable because it has that level of material success? I really do not have the answers. I do know that this is what equates to success both locally and in culture in the larger sense."

At Happytown™, we have nothing against a good sub sandwich. In fact, we've eaten enough of them that, if stacked end to end, they would stretch to Clermont.

So it was with mild interest that we checked Firehouse Subs' website at the behest of a tipster who told us that there was some hoagie-related malfeasance afoot concerning the chain and Orlando firefighters. We took a gander, and indeed we found a 60-second spot featuring a few of Orlando's bravest espousing the yummy goodness of Firehouse Subs in what looked like a real fire station.

That's all fine and dandy, but it could in fact be a violation of Orlando Fire Department regulations prohibiting firefighters from making commercial endorsements while in uniform without permission from the chief, which they didn't have, according to OFD flack Vicki Robles.

But it turns out that no rules were broken; the firefighters were wearing International Association of Firefighters uniforms, not OFD uniforms, making everything hunky-dory. The commercial wasn't shot at an OFD station, and none of the equipment shown belonged to the department.

Given commissioner Thrifty Nickel's frugality when it comes to other people's pet projects, we had to smirk just a little when we noticed an item on the city's consent agenda (things passed through in a lump with little discussion and therefore an excellent place to hide skeletons): $61,000 for two mosaics being shipped from Italy to hang in the Rosemont Community Center, which is in her district. The justification, according to the city's fiscal impact statement, is as follows: "The two mosaics will add warmth and enrichment to visitors at the Rosemont Community Center."

In Washington this type of thing is called "pork." Did we mention Vargo's up for re-election next year, and Rosemont's in her district?

Speaking of Vargo, the commissioner will finally have to stop the annoying habit of referring to herself as mayor pro tem in every bloody piece of literature her office puts out now that the council has selected Patty Sheehan and Phil Diamond as pro tems No. 1 and No. 2, respectively, for the year. Pro tem is an honorary position, and only matters if the mayor can't work – say he gets indicted or something, which of course would never happen, but just play along.

Vargo was pro tem No. 2 from June 2004 to now – meaning she had as much chance of ascending to Dyer's throne as the secretary of agriculture has of becoming president – but she wore it like a great accomplishment. We've seen lots of pro tems, but we've never seen anyone brag about it before.

That fact wasn't lost on her fellow commissioners. Though the pro tem positions are shuffled around, Vargo spent the week lobbying her colleagues to create a rotation system that would have made her pro tem No. 1 this time.

But there was no way that was gonna happen. Last week we got word that at least one commissioner said Vargo would be nominated again "over my dead body."

We don't do dishes, but we do do dish. So forgive us for peeling ourselves away from the glare of Michael Jackson verdict coverage for a quick attempt at localized sensory overload June 13.

Billed as "Dishing on the Fringe," the Peacock Room's monthly cabaret/talk-show riot for June sought to unearth the stickier, possibly overlubricated events associated with too many theater people crammed into the otherwise sterile Loch Haven Park facilities. Surely somebody got nailed in the bathroom, right?

What we did find out was that the boys of Boy Groove ("sexiest of Fringe") were actually not gay, but deceptively virile 30-somethings with a timeshare and kissy lips. We also caught wind of a controversy involving artist Doug Rhodehamel's mischievous paper-bag mushrooms being utilized for the promotion of the show Zen, a renegade act which prompted Fringe magnate Terry Olsen to become dramatically irate. Oh, and somebody apparently gave somebody a blow job while dressed as Princess Leia … but not at the Fringe. Dishy. 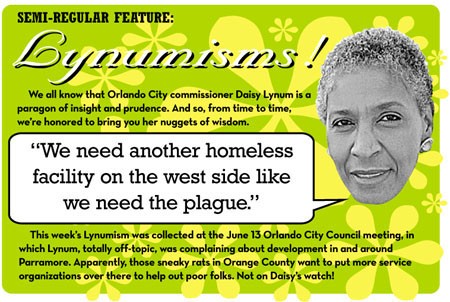