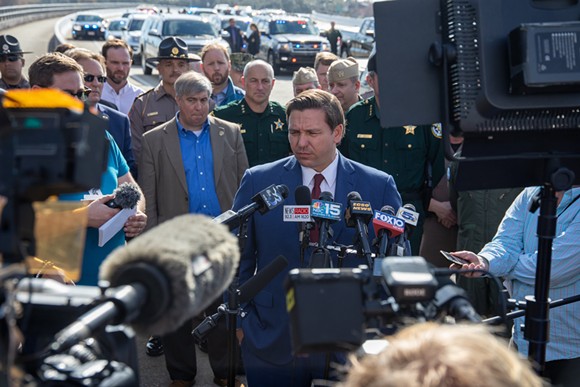 Three people were killed and eight individuals were wounded early Friday after a gunman opened fire at a naval air base in Pensacola, according to authorities.

The suspect was a trainee with the Saudi Arabia Air Force, Florida Gov. Ron DeSantis told reporters during a press conference Friday afternoon.

“The government of Saudi Arabia needs to make things better for these victims. I think they are going to owe a debt here, given that this is one of their individuals,” DeSantis said.

President Donald Trump said in a tweet that King Salman of Saudi Arabia called him to give his condolences. Saudis are “greatly angered by the barbaric actions of the shooter,” Trump tweeted.

DeSantis, a former Navy attorney who is a close ally of Trump’s, said the gunman’s nationality will likely add an additional layer to federal authorities’ probe into the shooting.

“When you have a foreign national involved, particularly in that part of the world, the investigation is obviously going to be different than if it were just somebody from the local community. And I think you will see that as things go on,” the governor said.

Capt. Timothy F. Kinsella Jr., the naval base’s commanding officer, declined to say whether the shooting would be investigated as an act of terrorism.


“The government of Saudi Arabia needs to make things better for these victims,” DeSantis said.

“I appreciate the question, but it is not something we want to speculate on right now,” Kinsella told reporters. “We are taking care of what we need to take care of right now.”

“This event demonstrated a serious failure in the vetting process and in the way in which we invite these people into our community,” said Gaetz, a Republican who is also close to the president.

Trump, however, said that King Salman said the shooter “in no way shape or form represents the feeling of the Saudi people who love the American people.”

Gaetz, who has joined Trump in demanding a crackdown on illegal immigration, called on Friday for “extreme vetting” of foreign trainees coming to U.S. military bases.

The Pensacola base has long provided aviation training to students from different countries, according to Kinsella. The base has several hundred foreign trainees, the naval base’s commanding officer said.

“It is something we have been doing for quite a while,” Kinsella said at Friday’s press conference. “The cross-pollination and cross-training that we do with our allies is something that we have done for a long time.”

Morgan said his office began receiving reports of the shooting shortly before 7 a.m. Friday. It took between three to five minutes for law enforcement officers to respond to the shooting, he said.

“They ran to the fight, not from the fight,” Morgan. “Even though they knew there was an active shooter —- and again the chances of putting your life in danger are great —- guess where they went? They went inside.”

DeSantis, whose administration deployed a state mental health coordinator to help witnesses and families of the victims cope with the tragedy, said state officials will continue to monitor the case and remain in communication with White House officials.

The Escambia County sheriff expressed gratitude for the support from the state.

“Trust me, the relationships run deep here. This is going to be one of those times where anything we need, we are going to get,” Morgan said.