Former Rep. Ric Keller writes in about ‘The day I locked up Martha Stewart’ 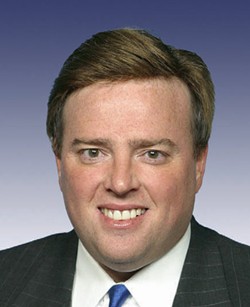 I will never forget it.

As a member of Congress, I attended dozens of town hall meetings at senior centers. My favorite incident was at a senior center was when an elderly man blamed me for sending Martha Stewart to prison.

By way of background, in 2004, Martha Stewart, the well-known TV personality and author, had a highly publicized trial and the New York Times reported was found guilty of a felony regarding statements she allegedly made about a stock trading deal.

She served five months in a federal prison in West Virginia. Her nickname in prison was M. Diddy. Shortly after M. Diddy was sentenced, I held a senior citizen town hall meeting in Lake County, Florida.

At the meeting, an elderly gentleman, who appeared to be about ninety years old, slowly walked up to the microphone.

Senior: “Congressman, I’m so mad at you! I can hardly see straight!”

Senior: “The way you put Martha Stewart in jail!”

Senior: “All these violent criminals are on the loose. And you guys are going after this poor lady? You should be ashamed of yourselves!”

Me: “Anything else?” (I let elderly people talk as long as they want.)

Senior: “Oh, you’re all in it together. One big government. You know it, and I know it!” (Clearly, it was time for me to throw in the towel.)

Senior: “Now that’s what I’m talking about! Thank you!”

I kept my “promise.” Martha Stewart never went back to prison. “And that’s a good thing,” to quote the icon.

Ric Keller is an attorney, former U.S. Congressman, and author of “Chase the Bears: Little Things to Achieve Big Dreams.” When he was in office representing Florida's 8th Congressional District, we wrote about him quite a lot. Once, we even endorsed him!