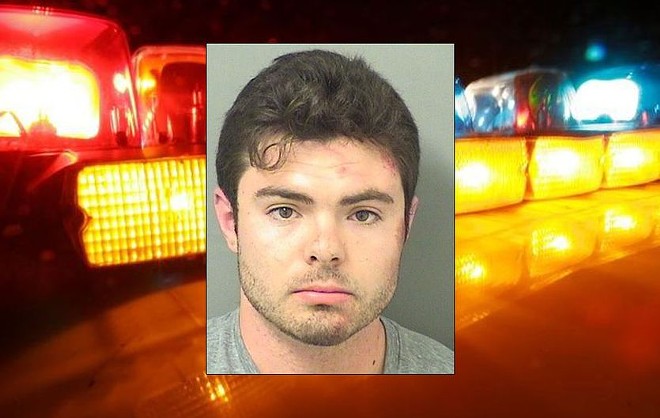 Photo via Palm Beach Post
Boca Raton resident Mathew James Visconti, a man who enjoys an efficiently prepared submarine sandwich after a long night of drinking, was arrested Saturday night after punching a Jimmy John's employee in the face for not making his sub "Freaky Fast" enough.

Police were called to the Jimmy John’s sandwich shop at 330 Clematis Street around 10 p.m. and met with Visconti, who appeared agitated and aggressive while complaining that he “hadn’t got his sandwich that he paid for,” the report said. Officers observed that Visconti was intoxicated.

The store manager had a cut on the bridge of his nose after being punched by Visconti, the report said.

While police were gathering information, Visconti allegedly began walking away east on Clematis Street. Told that he had to remain while the investigation continued, Visconti said, “[Expletive] that. Why am I going back?”

Visconti, 22, allegedly elbowed and kicked at two officers before being handcuffed, the report said. He also wedged himself between two palm trees and had to be placed in leg hobbles after he continued kicking at the officers.

Before going to jail, Visconti was taken to a local hospital to treat facial abrasions sustained during his struggle with police, the report said.


Visconti was released Sunday from the Palm Beach County Jail on a $6,000 bond and faces charges of battery of an officer and disorderly intoxication. No word on whether or not he ever got the sandwich that he paid for.