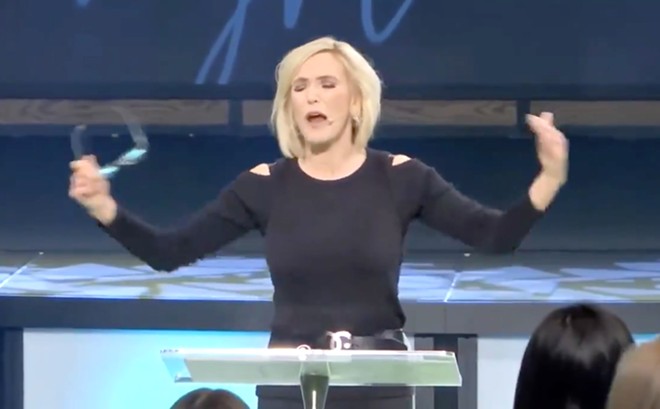 Screenshot via Guthrie Graves-Fitzsimmons/Twitter
While Florida Republicans are on their way to further limit women’s healthcare, a Central Florida pastor who also serves as the Trump administration’s spiritual advisor is arguing that it’s somehow fine for God to terminate a pregnancy as long as it’s “satanic.”

Apopka preacher Paula White, the Special Adviser to the White House Faith and Opportunity Initiative also known as Trump’s “God Whisperer,” gave a sermon on Jan. 25, and an absolute batshit insane clip of the event was posted to Twitter last weekend.

In the video, the televangelist can be seen shouting, “We command all satanic pregnancies to miscarry right now!” and urging “anything that has been conceived in satanic wombs, that it will miscarry and not be able to carry forth any plans of destruction,” not to mention how she comes against the “marine kingdom” and the “animal kingdom,” whatever that means.

Keep in mind that White, who leads a congregation of 10,000 at her megachurch New Destiny Christian Center, is prone to saying things that often leave moderate Christians scratching their heads. Besides pushing fringe Christian teachings like “the prosperity gospel,” which holds that God prefers rich people who donate to the church, White has also said radically stupid things like “To say no to President Trump would be saying no to God,” and “demonic” forces were coming after Trump to stop him from achieving Supreme Court picks.

Obviously, this hasn’t stopped her from amassing a small fortune through various now-bankrupt ministries over the years.

Screenshot via Guthrie Graves-Fitzsimmons/Twitter
Stay on top of Orlando news and views. Sign up for our weekly Headlines newsletter.