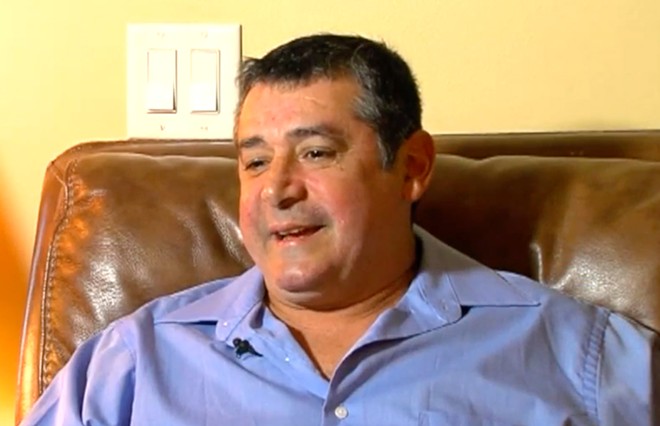 Screengrab via WPTV/YouTube
David Sosa
David Sosa of Martin County does not have a warrant for his arrest for a 1992 crime in Houston.

That would be another David Sosa. Not the married father who has worked in airplane engine research for over 20 years and owns a home in Stuart.

Still, Sosa of Stuart says the Martin County Sheriff's Department has arrested him for the alleged crimes of a David Sosa in Houston. Twice. The second time, Sosa was booked into jail for three days.

Because of the two mistaken-identity arrests and the weekend stay in jail, Sosa announced he has "filed a class-action lawsuit on behalf of all David Sosas who might travel through or chose to stay in Martin County."

He filed the class-action lawsuit "on behalf of all David Sosas who might travel through or chose to stay in Martin County."

In a press release, Sosa's attorney says that in both arrests, Sosa told Martin County deputies that, although he had the same name, the Sosa from the Houston warrant had a different birth date and physical description. The release says the two had "substantial height difference, 40-pound weight difference," and that he doesn't have a tattoo in the description for the Sosa linked to the Houston allegations.

"This is a nationwide problem. Martin County should never have arrested David, a Martin County resident, the first time and once they did they should have made some record so it did not happen again," said civil rights lawyer Randall Kallinen, "Perhaps this lawsuit will cause Martin County to not falsely arrest people when their identifying information does not match the warrant."

Sosa says he plans on staying in his Stuart home and is filing the suit so that he an be comfortable in his own community again.