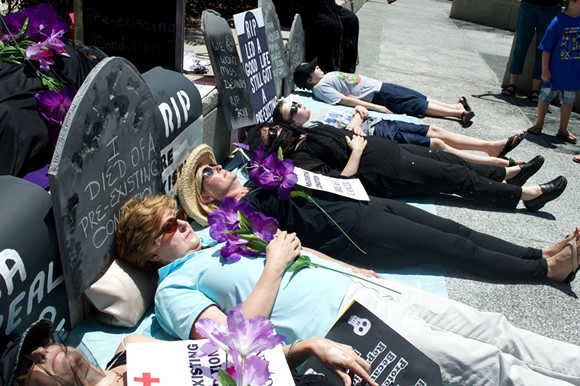 Photo by Monivette Cordeiro
Even as the U.S. Senate delayed a planned procedural vote Tuesday on a controversial Republican plan to overhaul the Affordable Care Act, the proposal was roiling Florida's political landscape ahead of the 2018 elections.

Democrats running for the Senate and in the state's governor's race hammered away at the GOP, suggesting that they saw a chance to go on the offensive over an issue that has dogged them for years. Republicans running in the marquee contests, meanwhile, seemed to be doing everything they could to take a definitive stand on the legislation.

At the heart of the controversy is a bill that, according to the nonpartisan Congressional Budget Office, would lead to 22 million fewer Americans having health insurance in 2026 than would be the case under current law.

Senate Majority Leader Mitch McConnell, R-Ky., unveiled the bill last week as part of the GOP's longstanding promise to "repeal and replace" the Affordable Care Act, commonly known as Obamacare. McConnell and other GOP leaders had hoped to advance the bill with a key vote Wednesday, but pulled the plug after it became clear the move would fail.

By then, Democrats were already blasting away at Republican candidates in Florida over the measure, underscoring changes in Medicaid spending and the reductions in tax credits for some low-income workers. The attacks suggested Democrats now see Obamacare, which had generally hurt the party since 2010 but has recently increased in popularity, as a net positive.

Former Congresswoman Gwen Graham, a Democrat who's running for governor, labeled the Republican bill "heartless" as she delivered more than 4,000 petitions against "Trumpcare," named for President Donald Trump, to the Florida Capitol office of U.S. Sen. Marco Rubio.

"But if that does happen, then we're going to need an even better governor here in Florida," she said. "The one we've had ... should not be able to sleep at night."

Tallahassee Mayor Andrew Gillum, one of Graham's opponents for the Democratic nomination, called for an amendment to the Florida Constitution that would recognize health care as "a fundamental right of all Floridians."

"There is a public trust for the government to care for its citizens, and our state can no longer be ambiguous about that moral obligation," Gillum said in a statement issued by his campaign. "When healthcare is under attack in Washington, we're going to lean into the challenge of healthcare in the Sunshine State and live our values."

Highlighting the potential differences that exist even within the party, Graham was equivocal Tuesday when asked whether she would support such an amendment, stressing her support for a public option in the state.

"I think health care is a right," she said. "But I want to make sure the way we go about it is doable."

Winter Park businessman Chris King, the third declared Democratic candidate for governor, didn't comment publicly on the bill Tuesday, but has in the past criticized a previous version passed by the House and attacked Scott and Agriculture Commissioner Adam Putnam for not taking a stance on the bill.

Putnam is the only major, declared Republican candidate for governor in 2018. A spokeswoman said Tuesday that Putnam's campaign had no comment about his position on the bill.

American Bridge, a Democratic campaign organization, said Monday that Putnam was "complicit" in the federal legislation.

“If Adam Putnam wants to be governor, he should come out and propose a plan of his own instead of hiding behind this disaster of a bill that gives tax breaks to the wealthiest few at the expense of Floridians' health," said Lizzy Price, a spokeswoman for the group.

Scott spent Tuesday in Washington, D.C., lobbying federal officials on the legislation while dancing around questions about his position during television appearances.

That didn't stop U.S. Sen. Bill Nelson, a Democrat likely to face a re-election challenge from Scott next year, from trying to tie his would-be opponent to the bill.

"Rick Scott is supporting and urging Republican senators to vote for a bill that makes huge cuts to Medicaid, takes coverage away from 22 million people and allows insurance companies to hike rates for older Americans," Nelson said in a statement issued by his office. "If he really cared about the people of Florida, he'd be doing the exact opposite of what he's doing now."