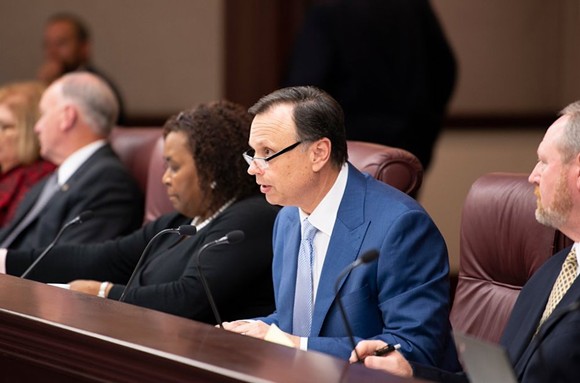 Julia Nesheiwat, DeSantis’ chief resilience officer Senate Infrastructure and Security Chairman Tom Lee, a Thonotosassa Republican and former Senate president, said the shift in the GOP is in part a reflection of a younger generation of conservatives, including Gov. Ron DeSantis and incoming House Speaker Chris Sprowls, who “aren’t so much in denial about some of these issues.”

Lee’s committee on Monday heard from several academic experts and the governor’s chief resilience officer on the environmental challenges ahead for the state, which has a large part of its population within 20 miles of the coast.

Julia Nesheiwat, DeSantis’ chief resilience officer, said her job is building a statewide strategy over the next couple of years that prepares Florida for the economic, physical and environmental impacts of climate change.

“These aren’t issues that are just 10, 20 years, it’s happening now, we’re seeing it now as we speak,” she told committee members. “This is a very dire and urgent issue that I think we need to address.”

Lee said he set up the panel discussion to “honor” the thoughts of the young conservatives and to acknowledge the state needs to consider the changing environment as it plans for the future.

“We’re putting tens of billions of dollars a year into infrastructure in this state and these are 50-, 100-year assets,” Lee said. “We ought to be doing what we can to make sure that we’re building them at an elevation or planning in an environment that is relevant to what this world might look like as time passes.”

Nesheiwat said the state, which could become a national leader on the issues, hasn’t been idle. She said in the past four to five years a number of state agencies have been working on mitigation efforts tied to the changing environment.

She said, for example, the Department of Environmental Protection has spent about $313 million on resilience efforts and coastal protection.

“The unfortunate thing is that the bar is so low, we lost a decade under Gov. Scott and the prior leadership.” – Sen. Jose Javier Rodriguez

Sen. Jose Javier Rodriguez, a Miami Democrat who continues to wear black rainboots he donned the last two legislative sessions to raise awareness about climate change, said it’s good that lawmakers are talking about the issue. But he said there needs to be discussion about causes of the changing climate.

“The unfortunate thing is that the bar is so low, we lost a decade under (former) Gov. (Rick) Scott and the prior leadership,” Rodriguez said after the meeting. “It’s great that we’re talking about (it) … but the way resilience is defined, it excludes dealing with the causes of climate. The obvious next step is also to try to see what we can do on energy policy.”

The meeting reflected a continued change in tone from the Republican-dominated state Legislature. Throughout Scott’s two terms as governor many critics saw an indifferent or hostile approach to concerns about the impact of climate change in Florida. Scott was elected to the U.S. Senate in November and was succeeded by DeSantis.

DeSantis wasted little time changing the narrative, with one of his first actions after taking office issuing an executive order focused on water quality. The order directed the Department of Environmental Protection to make decisions based on the best available science and to create an Office of Resilience and Coastal Protection to help communities prepare for the effects of sea level rise.

Lee said it’s still too early to predict a full “paradigm shift” among lawmakers or what legislation could come from the 2020 session. But he said discussions are needed on issues from septic tanks and drainage to coastal construction to road planning.

“I do think we’re headed in that direction,” Lee said. “I think reality is going to set in. And if it doesn’t, it’s going to hit us right in the face.”

During the 2019 legislative session, two Senate committees unanimously backed a Democratic-sponsored bill that sought to require sea-level projection studies for some state-financed construction in coastal areas. But a House version of the bill never appeared before a committee.

However, Sprowls last month took on the climate issue after being formally chosen by his House Republican colleagues to become speaker after the 2020 elections.

"These aren’t issues that are just 10, 20 years, it’s happening now, we’re seeing it now as we speak. This is a very dire and urgent issue that I think we need to address." – Julia Nesheiwat, DeSantis’ chief resilience officer

“Florida’s prosperity is inextricably tied to our environment,” Sprowls, a Palm Harbor attorney, said at the time. “Our beaches and our water are among our state’s chief economic assets, and as the trustees of our state, we have an obligation to protect and enhance those assets. We need to stop being afraid of words like ‘climate change’ and ‘sea level rise.’”

Sprowls said conservatives can “recognize that our environment matters without banning our air conditioners or closing our supermarkets or scrapping our cars.”

Scott also has been using the phrases he once took heat for failing to utter. In September, for instance, he promoted his gubernatorial administration’s work to fight climate change.

“That is why, as Governor of Florida, I worked toward real solutions for the effects of climate change by investing hundreds of millions of dollars to address sea-level rise, including over $300 million for flood mitigation, coastal resiliency, beach renourishment and coral-reef protection,” Scott wrote to Arditi-Rocha.