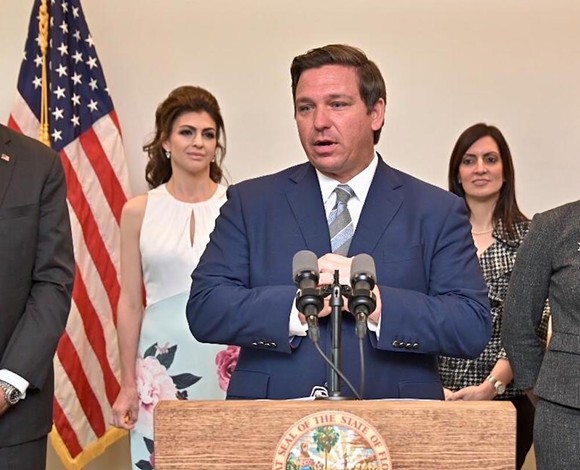 Photo via Ron DeSantis/Facebook
Gov. Ron DeSantis is assembling a team to determine when and how the state can start to reopen after massive economic damage from the novel coronavirus, as influential business groups push for a restart.

DeSantis is expected to have a task force in place by the end of the week amid shuttered businesses and unemployment numbers that continue to spike in Florida and across the nation.

The U.S. Department of Labor on Thursday reported an estimated 181,293 first-time unemployment claims were filed in Florida during the week ending April 11, putting the state at nearly 600,000 claims over three weeks.

Following the lead of the White House and contending he sees “positive” trends in the fight to reduce the spread of the deadly coronavirus in Florida, DeSantis said his task force will provide recommendations about restaurants, schools, tourism, agriculture and other businesses.

Part of the recommendations will involve requirements about testing for the virus, DeSantis said.

“We’ve done a lot on testing, but I think with the new technology that is available, I think a lot of employers will want to have easy access to tests that can be done quickly,” he said. “Hopefully you get the instant test. But if not, at least be able to get one within 24 hours.”

DeSantis spokeswoman Helen Aguirre Ferre tweeted Wednesday and Thursday the task force will have an emphasis on small businesses.

DeSantis, who has been in conversations with members of a new White House advisory group on economic recovery, started talking about the task force on Tuesday. That was the same day President Donald Trump rolled out his group.

DeSantis on Wednesday called it “prudent” to start planning for a post-virus “resurgence.”

“There’s a lot of focus on what will the president do. What will this governor do? And obviously that matters. But part of this is just going to be based off how people feel about the situation,” DeSantis said. “Do they think we’ve gone in a good direction? Do they think that the risk is minimal enough? Some people may not think that. It’s not going to be just what government does.”

DeSantis also noted his support for holding televised sporting events in empty stadiums in Florida, pointing to a discussion with NASCAR Vice Chair Lesa Kennedy, who was among a list of sports commissioners and team owners named to Trump’s advisory committee.

“I mentioned NASCAR, I talked to Lesa Kennedy, I want them to race,” DeSantis said. “I think the public would like to see – it’s going to be on TV. I understand you’re not going to fill up Daytona Speedway right now. I’m not suggesting you do, but I think if there’s content that can be created, I think that that’s a good thing. Even Dr. (Anthony) Fauci said, televised sports is a positive thing.”

Fauci, director of the National Institute of Allergy and Infectious Diseases, is a lead member of Trump’s White House Coronavirus Task Force.

DeSantis’ task force, which will also include elected officials, comes as business groups have been pushing to reopen parts of the state where many businesses have shut down or dramatically scaled back.

On Monday, big-name lobbying groups in Tallahassee announced they had teamed up in a task force to recommend when the state can start to reopen.

Brewster Bevis, an Associated Industries of Florida senior vice president who is co-chairing the task force, said the goal is to help lawmakers and others “collectively help Florida’s economy safely restart.”

“From health care to retail, manufacturing, hospitality, transportation, agriculture, builders, general commerce and our most treasured tourist attractions —- the forward thinkers and dedicated Floridians that will make up this task force are ready to help,” Bevis said in a prepared statement.

The Florida Department of Economic Opportunity is scheduled Friday to release March unemployment numbers for the state. While the U.S. Department of Labor reported 181,293 first-time unemployment claims had been filed in Florida during the week ending April 11, that number is below an estimate that DeSantis gave last week while appearing in Jacksonville.

U.S. Sen. Marco Rubio, R-Fla., said in a video released Wednesday that current business restrictions are not sustainable. But he also cautioned that as officials move to reopen the economy, infections and deaths will continue without a vaccine.

Rubio said the nation needs to develop anti-viral medications and to set up a system to rapidly test people, isolate them and contact others who may have been infected. Rubio also suggested identifying restrictions, such as restaurant spacing and the 6-foot-per person rules at grocery stores, that should remain or be modified.