"I've seen things you people wouldn't believe. Attack ships on fire off the shoulder of Orion. I watched C-beams glitter in the dark near the Tannhäuser Gate. All those moments will be lost in time, like tears ... in ... rain. Time ... to die."

I don't know how many times I heard Peter O'Sullivan, the founding editor of Orlando Weekly, make this speech from Blade Runner. He loved it. He savored the bad-assery. Sometimes he'd just say the first line, and you'd completely believe him. He was British, fercrissakes, a world traveler and spellbinding storyteller.

If he made it to the "Time ... to die ..."  part, he would always laugh. He had a laugh like a lascivious pixie – one who just heard a joke so dirty he still couldn't believe his pixie ears. "Charm" doesn't begin to cover it.

That's who started your paper. 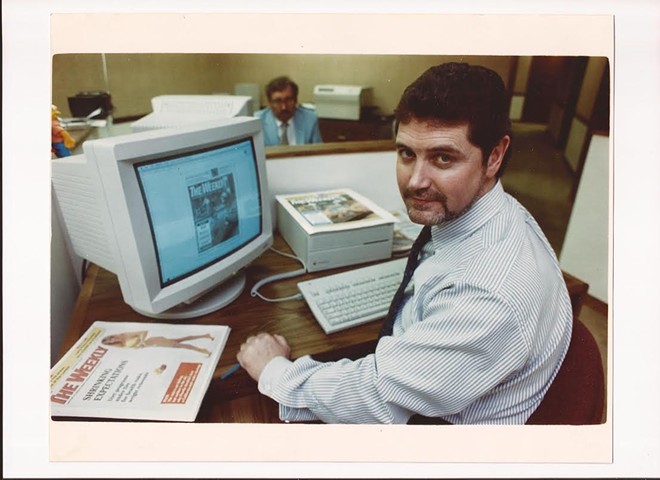 Without Peter O'Sullivan, there wouldn't have been a Weekly.

I met Peter in 1990, before blogging, ebooks and the infinite space of the Internet democratized media. If you wanted to write something people would read, you had to convince some editor that you merited precious real estate on their pages. I was 26 and sure of only one thing: that I could turn phrases like Fred turned Ginger. So I wrote a letter to Peter, the editor of this new outlet, The Weekly, a fresh voice on the pin-thin menu of Orlando media, hoping I might fit in.

Years later, he would tell me he read that letter and thought, "Wow, she's really kind of snotty. ... Yeah, I'll call her."

After contributing some freelance work to The Weekly, I took over the back-page column called "The Juice," with Peter alternately guiding and goading me to be better, braver, more curious and more confident. He called me Huntress Thompson, and let me do pieces that helped earn us protest threats (when I discovered you could buy pre-blessed communion wafers in any religious store and, as I recall, suggested canapé recipes for them), a Florida Press Association award (a Valentine's Day gift guide that included a poster of "Penises of the Animal Kingdom") and most importantly, readers.

The Weekly was owned by the Toronto Sun, and in a few short years they brought Peter back to Canada to be their editor-in-chief. He handed The Weekly, with its template as a sharp, funny, solid alternative, to Jeff Truesdell, who went on to define it as a clever, important media source in Orlando. Because Jeff was willing to step into Peter's role as my mentor, too, I moved through this change like one of those cartoon characters about to step off a mile-high girder, when another girder magically swings into their pathway and takes them even higher.

Had a different team been in place in 1990, the Weekly might never have lasted so long, launched or sustained so many careers, or given Orlando a welcome new voice. It wasn't just us that Peter affected this way, but I wouldn't realize that for a while.

For as often as I heard Peter relish the "time to die" speech, it never occurred to me that he would. I can't remember how I found out, just that it was in the summer of 2013, and it was like getting hit in the chest with a shovel. Some days it still is – and it wasn't until I went to his memorial in Toronto, and heard the stories from people there about what a great mentor, innovator and champion for their careers he was, that it really dawned on me how many people he affected.

People talk about artists seeing beauty in the world that most people can't. They never, ever talk about editors that way. Editors are better at seeing the truth, which usually isn't pretty, much less beautiful, but the good ones hear things in their writers that aren't evident to everyone. Peter heard our distinct voices, often when no one else did, and he knew how to bring out the best in us. He did something I don't know if people have time to do anymore: mentored, cajoled and went out of his way to create opportunities for us, until before we knew it, we had become infinitely better – without losing the quirks that made us stand out to begin with. He made us feel like we could do anything. So we did.

Thanks to Peter, Jeff and the Weekly, I've seen things you people wouldn't believe. Time ... to keep looking.