A raccoon posed on an alligator last weekend, resulting in Florida's greatest photo 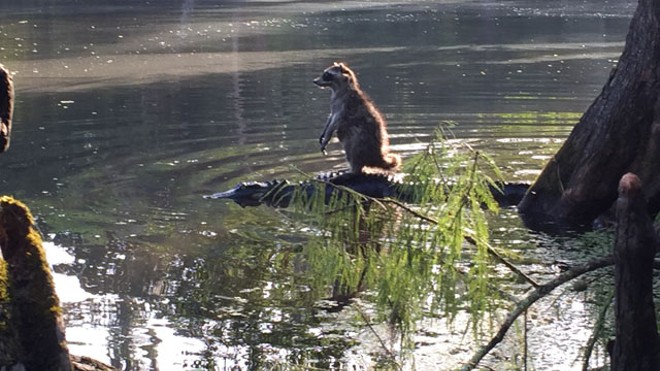 Photo by Richard Jones via WFTV
Last weekend was packed with fantastic Florida-based photo-ops, the Rolling Stones rocked the Citrus Bowl, Orlando City beat DC United and this proud, magnificent raccoon posed on the back of an alligator.

Palatka, Florida resident Richard Jones told WFTV he took this photo in Ocala National Forrest, Sunday afternoon, June14th, after his son startled a raccoon out of some bushes and it unknowingly ran out onto the back of this lackadaisical gator.

According to Jones, the raccoon quickly realized it made a terrible mistake and scurried back to land unharmed.

"I snapped a lucky picture right when the gator slipped into the water and before the raccoon jumped off and scurried away. Without the context you'd think the raccoon was hitching a ride across the river. Pretty amazing," Jones said in an email to WFTV. "Definitely the photo of a lifetime."