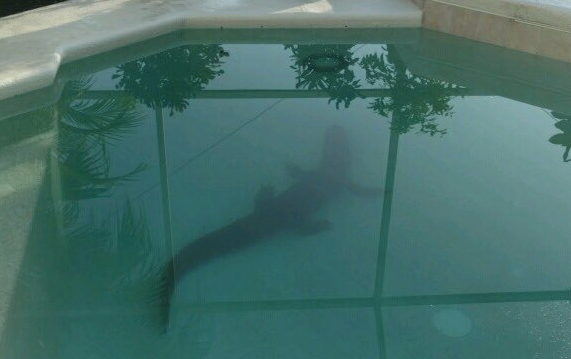 Photo via HCSO
There's a saying in Florida that you should always assume every single body of water probably has a gator in it, which, as you can see, also applies to pools.

This morning, the Hillsborough County Sheriff's Office posted a photo to their Twitter account showing a 7-8 foot gator casually resting at the bottom of a residential pool in Lithia.

"Deputies on scene now, apprehension of this trespassing suspect should be interesting," joked HCSO.

According to HCSO, a licensed trapper with the Florida Fish and Wildlife Conservation Commission is in route to remove and likely "relocate" the gator.

Look before you leap, folks.


Deputies on scene now, apprehension of this trespassing suspect should be interesting. - Alligator in residential pool. pic.twitter.com/L80jFnqSsx

Deputies confirming the alligator is approx 7 to 8ft, a licensed @MyFWC trapper is enroute to the scene. pic.twitter.com/IcZdo0AY7h