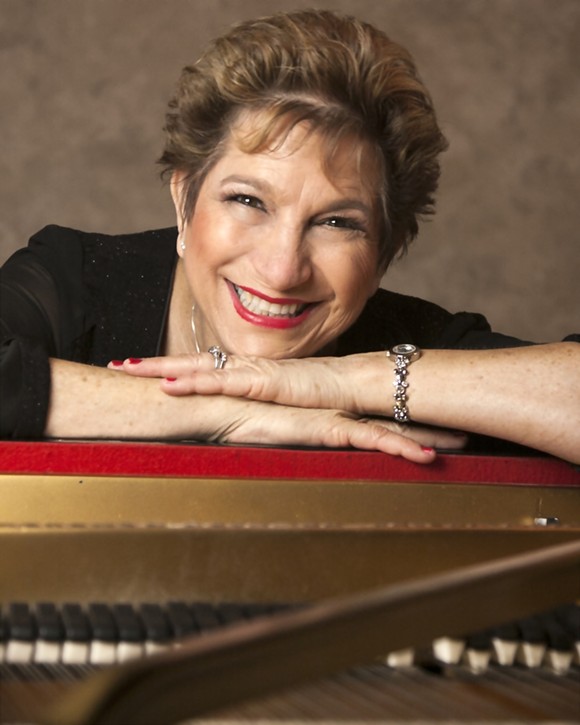 via www.carolstein.com
Carol Stein
The holiday season is upon us and, man, the spirit is needed like never before. With a high-water mark year of death and despair, we could all use a concentrated dose of escapism to take us anywhere but the here and now for a little while. That’s precisely what brought me out to see a performance of Nat King Cole songs and classic chansons françaises by Michelet Innocent (Dec. 4, Timucua White House). Unfortunately, Monsieur Innocent was a mysterious no-show.

Most of the time, chance takes the form of vexing mishaps like this one seemed destined to be. Once in a while, however, it turns out some fortune. This night, it was a diamond named Carol Stein. When she walked into the White House, she, too, had the same plans as me: to take in a nice show. But her evening took a serious swerve when Timucua founder Benoit Glazer asked her to fill in at the last minute. It was a Hail Mary move that would prove to be a major clutch play.

Given the circumstance, Stein deserves a grading curve due to both her inability to prepare and her totally game attitude. But she needed no such charity. What the pianist-singer did technically onstage was weave together jazz, classical, holiday music and standards into a complete hour-long program. But, emotionally, she took chaos and spun it into pure delight. Apropos to the season, Stein took audience requests for Christmas songs and turned them into a medley:

Yes, she frequently had people clapping and singing along. The genius of her performance was that it connected us – to her, to each other – because, hell, we were very much all in the adventure together. It was that sort of night, and she lassoed the collective spontaneous energy of the room like a true showwoman. She even composed a song on the spot for a couple in the audience celebrating an anniversary based on their life story. Your freestyle ain’t got shit on this.

Had I had the chance to do my homework on the artist that wound up onstage, I wouldn’t have been as surprised at how professional the performance was. Turns out, Carol Stein (www.carolstein.com) is indeed a pro – a studied and working musician who’s spent decades playing all over the world and currently holds entertainment residency at the Rose & Crown Pub in Epcot’s U.K. Pavilion.

None of that, however, diminishes the magic of what she did here. She took a freefalling plane of a night and commandeered Timucua’s beautiful house piano like Sully Sullenberger to bring it down to a triumphant and life-affirming landing. Stein saved the day with such grace, skill and charisma that the applause for her was already thunderous by the second song and her finale was met with a howling standing O. And she didn’t even know she was gonna do it. Just as beautifully, Stein herself was glowing under the spotlight, drinking in every bit of the extraordinarily, surprisingly special moment. It’s nice to live in a musical community where such talent just spills over.

But speaking of heroic, you should know how much of a rock star Benoit Glazer is. A mere week ago, he was badly injured to the tune of fractured wrist, ribs and skull (!). That he allowed this public show to still go on in his home is gracious enough. But even in his fresh and delicate condition, the man persevered and hosted it … like… a… gangster. Not only that but he also showed off his hard-core wounds onstage. Great to see you back on your feet again, Benoit, and maximum wishes for a full recovery.