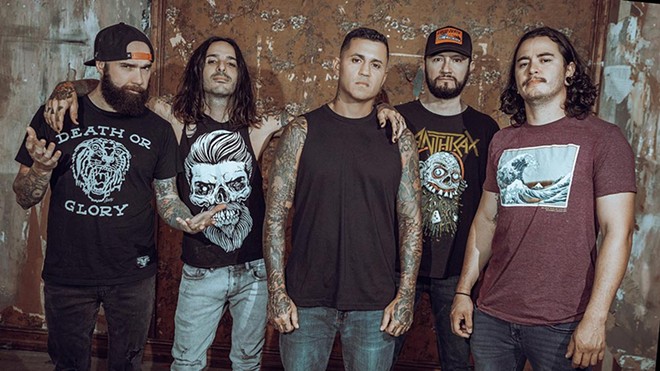 After four years of smaller releases, Orlando punk band 430 Steps had finally completed and released their debut album (Citizen of Nothing) in 2020. They’d just begun touring to promote it when COVID shut down everything.

In the period that ensued, though, they channeled all that time and frustration forward into creating a whole new, even bigger album. And something transformative happened along the way.

The just-released, 12-song Lights Out LP is easily 430 Steps’ most prismatic work to date. While they’ve shown metal edges before, their main thrust has been classic hardcore. This time, those metal ribs are even more pronounced, with some thrash onslaught, hard-chugging riffs and even burning solos appearing throughout. The overall recording is a much fuller sound for them that packs a deep low-end kick more befitting a metal record.

The high-def dimension here renders 430 Steps’ attack with more muscle and detail than ever before. Some of those details further distinguish this record. There are moments where they shift gears mid-song without warning to reveal even more unexpected peeks of melodic rock, grunge and even electronic music (“Toxic Wall”).

Those detours, however, are brief. Even through all this newfound kaleidoscope, the tenor here is primarily beast mode. They may explore, but they’re not fucking around.

This is 430 Steps’ most furious and locked-in record yet. No matter how densely they pack their sound, they blast it straight down the barrel good and hard.