Mötley Crüe bring their glammy spectacle to Orlando this weekend 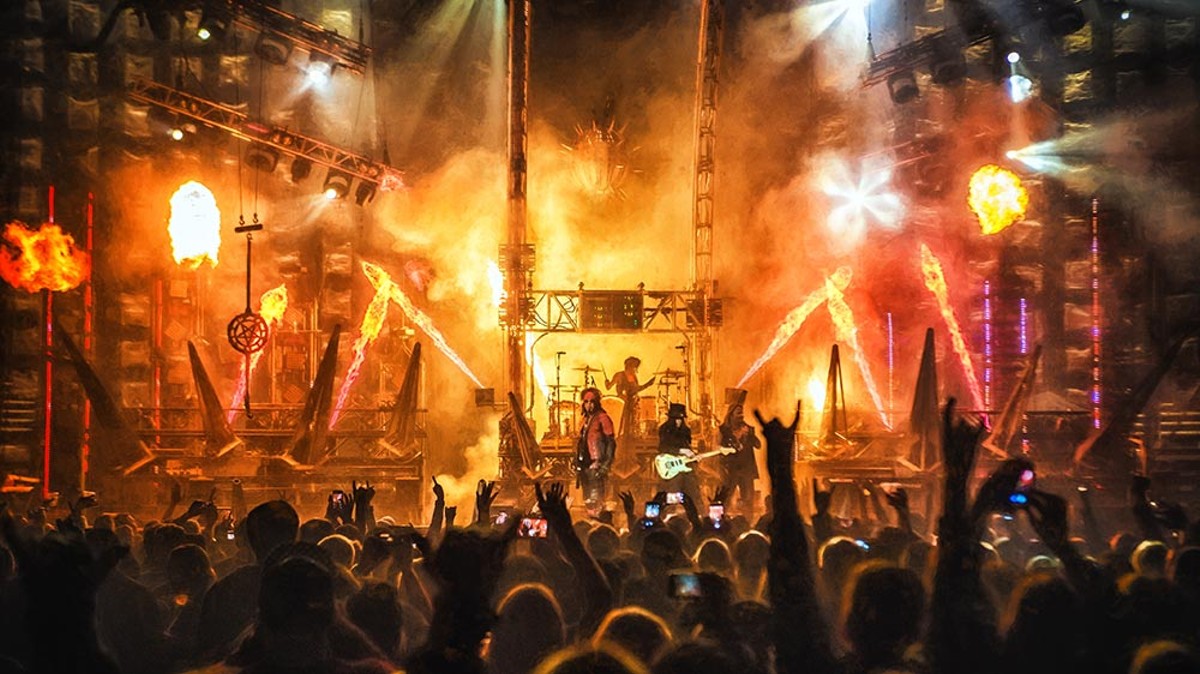 Few things are tougher than trying to make a case for the continued existence of Mötley Crüe in 2022. Any argument one might fashion about mindless fun or stadium catharsis could barely withstand the onslaught of withering memes comparing Vince Neil to the Rankin-Bass Bumble — or YouTube clips of him wheezing his way through another vocal performance that practically reinvents the concept of phonetics.

This is the group that spooged its way onto the scene in 1981 with Too Fast for Love, a record that remains the finest slab of L.A. melody metal not titled Van Halen.

As they head into Camping World this week as part of a long-postponed tour with Def Leppard, Poison and Joan Jett, the Crüe are useful mostly for the lesson that a legal agreement to never reunite can include the codicil "unless we change our mind." Couldn't we have learned that from Todd Miner Law at a far more reasonable hourly rate?

And yet ... and yet ... there's something about Mötley that can get you rooting for them despite yourself. Especially if you were there at the beginning. After all, this is the group that spooged its way onto the scene in 1981 with Too Fast for Love — a record that remains the finest slab of L.A. melody metal not titled Van Halen.

As for Neil, I always choose to think of him the way he was when I first clapped eyes on his band, on Jan. 30, 1984, at Madison Square Garden (opening for Ozzy Osbourne). His M.O. that night was the polar opposite of the state-fair humiliations we're now accustomed to: Race to the very end of the stage-right catwalk, sing two lines while dangling precariously over the crowd, then sprint across the stage to the very end of the stage-left catwalk to sing the next two lines. Repeat for an hour, never running out of breath. Clearly, this was a man who had been told he could be a millionaire by the end of the year if he wanted it badly enough. He did.

After that ... well, we all know what happened. The millions went to paying off vehicular manslaughter, and the Crüe's subsequent recorded output mostly made them look as dumb as they were, not as smart as they could sometimes manage to appear. (After the debut, there was no more name-checking Sandra Dee.)

Decades of hard living and commercial compromises later, they're in danger of getting their ass kicked by Def Leppard, a band who sound as if they're playing to a click track even when they aren't.

But if only for old times' sake, I'd like to believe the P.R. boasts that Neil has finally pulled his act together for this all-important round of shows. Failing that, I'd like to think that whatever vestigial shortcomings we might see and hear will be offset by the opportunity to reconnect with a part of us that once knew how it felt to be under the gun, on the run, to be Public Enemy Number One.

I can't support that optimism on an objective, intellectual level, of course. I can't decide for you if you should risk the money. I'm not the one they call Life Coach Feelgood. I'm just a guy who has a hard time letting go of a crush.

But I do know one thing: If you're going to get tanked for the show, do it outside a package store beforehand instead of paying those hyper-inflated stadium beer prices. Mick Mars might not have learned anything since 1983, but you and I sure have.


–
Stay on top of Central Florida news and views with our weekly newsletters, and consider supporting this free publication. Our small but mighty team is working tirelessly to bring you Central Florida news, and every little bit helps.
Scroll to read more Live Music Picks + Previews articles
Join the Orlando Weekly Press Club