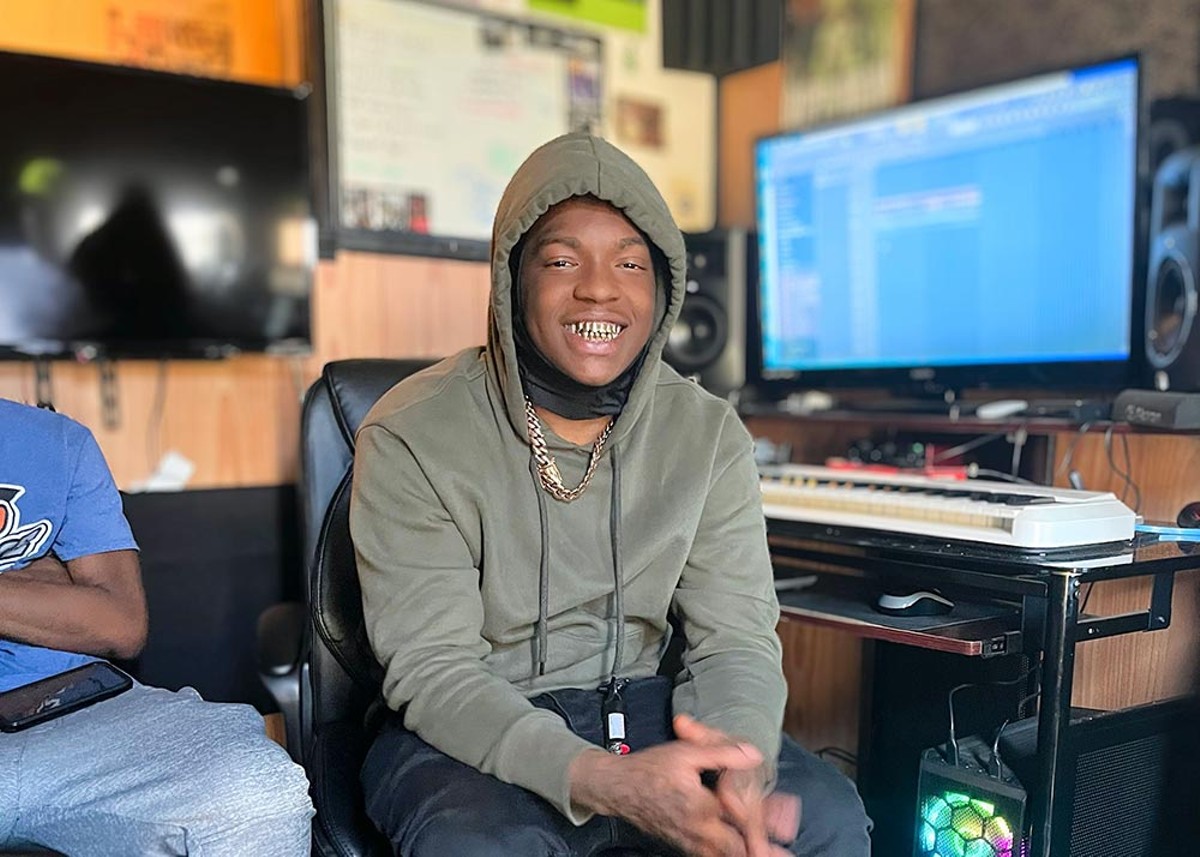 Have you ever heard someone complain that they miss old-school hip-hop because the rap coming out today all sounds the same? From a distance, this may seem to be accurate, but if you’re deep into a genre, the distinctions become more clear. An artist’s sound is as unique as a fingerprint, and it requires an educated ear to discern differences.

Producer Africa Black picked up on the original sounds coming from Richyy Rich and Kickkone early on, which is one reason he asked them both to appear on “Blood on the Leaves,” a song he executive produced in January of this year. The video for that record finally dropped on Friday, Oct. 21, so satisfying it was worth the wait.

As an executive producer, Black has put out several songs with Kickkone.
“If I feel like artists would sound great together, I try to make it reality,” Black says. Typically, if he asks, they say yes. He also drives the bus on choosing the beats.

Black earned his position in Orlando music — he’s a leader and influencer — DJing at clubs and events starting in 2018. But the origins of his authority are in the tireless ways he has demonstrated commitment to young artists.

A young man known as Fooly who now lives a thousand miles away remembers being a 15-year-old living in West Orlando: “He did a lot on the ave. He really focused on Orlando. He would teach us approaches to promoting our music, and he never acted like he was too big to show support. He was totally consistent about giving tips on how to be a better man in all areas of life, not just becoming a better rapper.”

Fooly notes that Black built bridges. “He would have rappers from different hoods get on a song because he has a gift for bringing people together, sometimes people you wouldn’t expect to do it. He’s still doing that now. People were wanting Kickkone and Richyy Rich to do a song and he made it happen.”

Interestingly, it was Fooly who — all the way from Louisville, Kentucky — first put Orlando Weekly in contact with Kickkone, a rising star in hip-hop who has won a cult-like following and a rapidly expanding fanbase. Even if you don’t listen to rap, you can tell Kickkone has something special by the way people show up for his live performances. When Kickkone gets on stage, his fans celebrate with visceral devotion. They know all the words. They feel his music. Proximity to the artist is coveted. They are clearly going to stick around for his rise, and fuel it.

Kickkone agreed to a three-way phone call to talk about his music in December of last year, but because he is guarded and careful, it took 10 months to get to this point.

Here he is on a beautiful Monday afternoon, chilling in the studio with his team. The vibes are bright and appealing, and he’s ready to talk.

When you were little, what plans did you have for your future?
I wanted to play football back then.

What did you do in high school? What was it like for you?
Trouble.

I’ve heard it said that you don’t just have a Orlando sound, that you bring a layer that’s unique that people really connect with. What do you think that is?
I don’t really know. Like, I don’t know. I think I just, I feel like I just be knowing music sometimes or like what somebody want to hear. … If you gonna relate, you gonna relate.

When you go to bed at night, if you ever do, what makes you think the day was successful?
One, that I woke up and felt awake. Two, I got to talk to my love ones and shit. And then like, I ain't gonna lie, like every other day or one time in the day, sometimes I go like through all my views, you feel me? I just go through all my shit and see … what my shit doing. Just seeing my views going up and they be going up like every day they be going up. So that's a blessing.

Do you always punch in or do you write?
I do prefer punching in, but like, I ain't gonna lie, when I used to write my music, I feel like it was real music, you feel me? Like when I write, I sit down and really think. Get the feel and really see how I really want to do that bih. I'm in different flows. ‘I like this one more or I like this one.’ I used to write a hook and then write a verse and then … go to the next song. I used to always do that. That's why like a lot of my songs on YouTube … I used to make songs and then just throw one of my brothers on there. … Cause I never used to like finish my songs. I used to make a hook, make a verse and then never finish that bih.

And now?
It's just moreso coming off tomorrow. Just coming off. The first thing that come in my mind, I do that.

Can you do a good job performing a song live if you punched it in?
I feel like I could.

How often do you perform?
I be having a live show like every other week, type. I only been out, like, two months.

How long were you in jail?
About five months and a half, probably.

Did you write music in there?
No. … People were telling me to, right? You feel me? But … my mind was just so focused on getting out that I wouldn’t worry about none of that.

Do you remember what it was like when you came to this studio for the first time after you got out?
Did, what, two, three songs? I don’t really like ’em. I know I could do better but I just got out so it’s, I’m getting back used to rapping on the beat. The songs was straight but I know what I could do. I know I could do better than that.
Scroll to read more Music Stories + Interviews articles