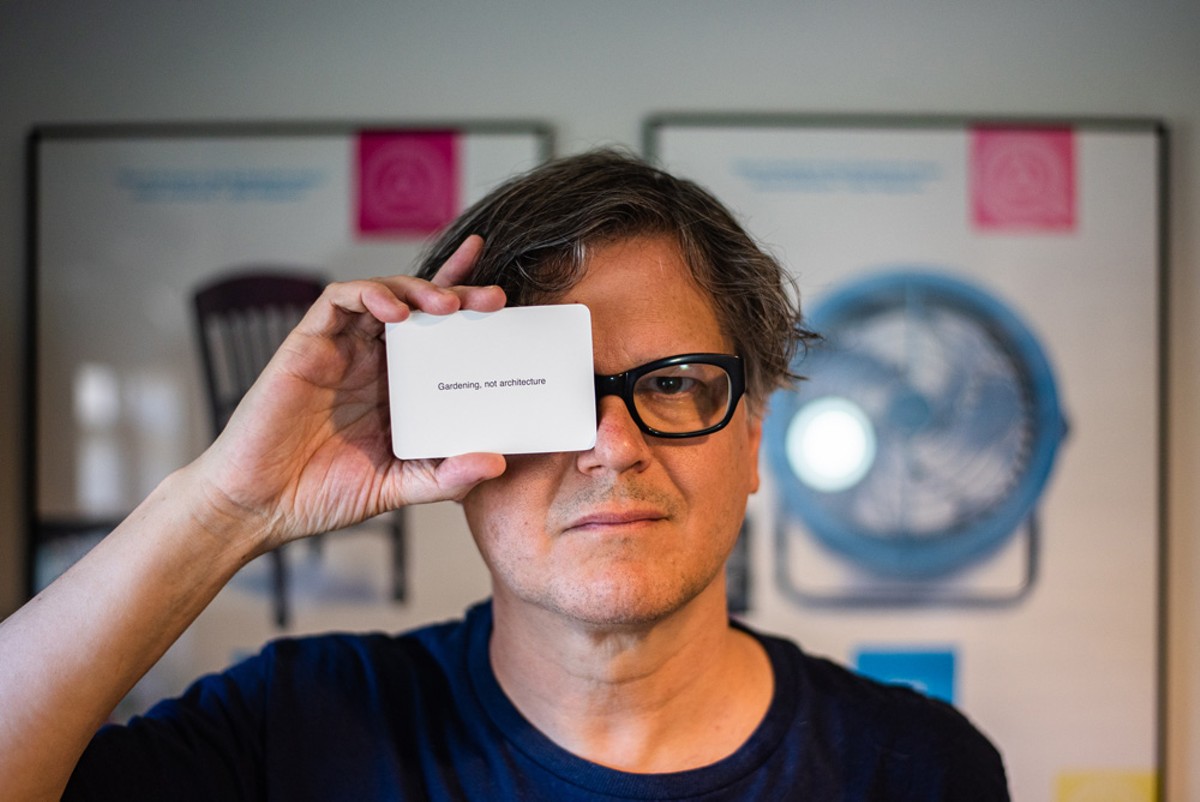 "I kinda fell out of love with it. I was enjoying what was happening less and less," says former globe-trotting DJ and producer extraordinaire Michael Donaldson.

"I got into DJing initially because it seemed like an extension of what I was really into as a punk rock kid ... I was really into the idea of the band being the facilitator for the show; they weren't necessarily the stars."

While the latest generation of EDM fans are likely sick of hearing tales about the rise and fall of Orlando's underground dance music scene during the 1990s, they were indeed heady times. From humble acid house origins during the late '80s with Kimball Collins spinning at AAHZ to the opening of Club Firestone in 1992 and Chemical Brothers performing their first U.S. show at the Edge a year later, Orlando's rave scene made national waves.

In fact, Rolling Stone magazine at the time dubbed Orlando the "Seattle of electronica" in a lengthy feature about our little underground in the Aug. 21, 1997, issue. However, the City Beautiful's time in the musical spotlight was fleeting — the eventual passage of the City of Orlando's "rave ban" a local ordinance that forced nightclubs to close by 3 a.m., was the inevitable beginning of the end.

Though a transplant, Michael Donaldson was here for all of it — initially moving from Monroe, Louisiana, to Orlando in 1989 to enroll in the University of Central Florida's then-new film program, though he opted for a radio-television degree instead. He was soon DJing for WUCF 89.9 FM — UCF's campus station — and later, Rollins College's WPRK 91.5 FM. After graduating from UCF in 1991, Donaldson was well on his way to becoming a fixture in Orlando's emergent indie-alternative music scene.

He had been in several punk bands during his teen years, so it was no surprise when Donaldson began playing guitar in local dream-pop band Tick Tick Tock. (For the curious, search for "Animation Festival" on Bandcamp — a Butthole Surfers-esque group he was in during the late '80s.) Finally, cementing his now-established auteur sensibility, he also opened retail shop Bad Mood Records in 1992.

Donaldson was an avid home-recordist during those early years, four-tracking his Juno 106 synth, drum machine and guitar to produce bedroom-pop symphonies. But after seeing Meat Beat Manifesto perform, he bought a sampler and began creating his own dance tracks — in debt to both the smooth grooves of house music and noisy hip-hop like Public Enemy. With the addition of the textural and conceptual influence of ambient pioneer Brian Eno, he was ready to drop and roll as Q-Burns Abstract Message (Q-BAM).

While Donaldson certainly wasn't the first indie rocker to trade his guitar for a sampler — or turntables — he felt it was a natural extension of his DIY punk days.

"In the early '90s, I really enjoyed underground dance music in that it was being self-distributed. [It was] bringing everyone together ... that had so much appeal to me. My whole point of DJing was to be a part of what happened in the room with the crowd," remembers Donaldson.

He released his first single as Q-BAM — the breakbeat noir of "141 Revenge Street" — in 1995, and began spinning records focused on moving the dance floor. Within two years, Donaldson inked a deal with Astralwerks, the iconic electronic label. He eventually released three albums for the label over the next five years — early-singles compilation Oeuvre (1998), full-length debut Feng Shui (1998) and final offering Invisible Airline (2001).

Tours as the opening DJ for Gus Gus, Chemical Brothers and longtime heroes Meat Beat Manifesto quickly ensued. As did the onset of his seemingly nonstop DJ gigs — both nationally and globally. At his early-2000s peak, Donaldson was booking 100 dates annually, traveling from San Francisco to Siberia. In fact, one of his favorite countries to travel to was Russia, where he DJed more than a dozen times.

In parallel to his seamless beat-making for Astralwerks — Donaldson is a true multitasker — he also formed Eighth Dimension Records in the mid-'90s with serial entrepreneur Gerard Mitchell. Soon, this music collective and licensing label — which included local artists Beef Wellington, DJ BMF, Dynagroove and Pimp Daddy Nash — began releasing records. At the same time, Donaldson was also remixing other artists such as Faith No More, Fila Brazillia, Mazi & Colette, Rabbit in the Moon, Us3 and Violent Femmes. Self-reliant and self-distributed, indeed. 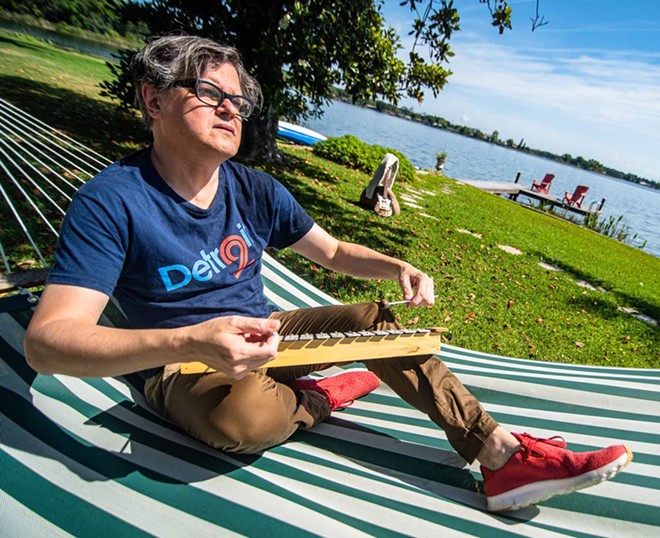 Photo by Matt Keller Lehman
What's the next note?

We're sitting comfortably in the screened-in Florida room of Donaldson's home — shared with wife Caroline St. Clair — which offers a gorgeous, near-panoramic view of Lake Holden and the downtown Orlando skyline. The sun is shining with a light breeze. Several cats mill about. Snacks are offered and eaten. Our discussion turns back to his retirement from the decks.

"Another reason I got out of DJing is it started drying up when the crash happened in 2008. I remember looking at my calendar and I had no gig commitments anywhere ... in the far future, near future. And that was the first time since '96," Donaldson says.

And just like that, the seemingly endless gigs dried up overnight for Donaldson and hundreds of other DJs making a living by jetting across the globe to play records for ecstatic nightclub crowds. But his recall of this life change takes on an even more personal tone when he reveals that a health concern also played a role.

"It became a little tougher for me also because I had this eye disease called keratoconus that made it really difficult to see in dark rooms — so it became less and less fun for me for that reason as well," Donaldson says.

After a DJ spins their last record, what's next? Fortunately, Donaldson and Eighth Dimension's artists were early adopters in the sync-licensing boom — meaning securing song placement in television, films or online content for a fee — of the late '90s and early '00s. Initial deals included licensing a Q-BAM track for Sex and the City, placing a Pimp Daddy Nash song in Six Feet Under and securing two Beef Wellington beats for two different seasons of The Wire.

While 8D Sync had Donaldson working with bands again, it wasn't quite the same experience as releasing new music to niche audiences of appreciative fans. Enter 8D Industries — a consistent brand continuity via the numeral "eight" runs strong throughout his microverse (see also the 8sided.blog) — a boutique label with a roster of experimental-electronic acts far removed from the 4/4 pulse of the dance floor.

8D Industries (8dindustries.bandcamp.com) has released music from Gemini Revolution, Monta at Odds, More Ghost Than Man, Ralph Kinsella and San Mateo — in addition to tracks by Donaldson himself.

While the majority of his 8D-related ventures were consciously planned, other opportunities were seemingly spontaneous and random. After recording a couple of podcast episodes with former labelmate Jon Curtis (Pimp Daddy Nash) which were never officially released, Donaldson stumbled upon another potential avenue.

"This band out of Atlanta decided they wanted to do a podcast to promote their new album. I got hired for them and cut three episodes," says Donaldson.

Then COVID-19 hit in March 2020, and the band's funds dried up. Unpaid and understandably frazzled, Donaldson thought he had reached another dead end.

Instead, he was contacted by a friend who worked for SiriusXM — specifically with Andrew Loog Oldham's show on the "Little Steven's Underground Garage" channel. (For the uninitiated, Oldham is the iconic English music producer best known as the Rolling Stones' original manager from 1963-1967. He also worked with a slew of famed musicians including Eric Clapton, Jimmy Page, Nico and Rod Stewart.)

The two developed a podcast series featuring Oldham casually chatting with artists and musicians on a variety of topics. The show was soon picked up by the Double Elvis network — home of podcasts "Disgraceland" (true crime) and "Curious Creatures" (hosted by Siouxsie and the Banshees' Budgie and the Cure's Lol Tolhurst) — as it was going into its second season.

A savvy producer was needed to edit down each episode's raw conversation and sweeten the audio. Guess who was brought in to tighten up the show?

"I have a friend who [was a producer] at SiriusXM ... and he worked on Andrew Loog Oldham's show. And when Andrew left, they started doing this podcast together called 'Sounds and Vision.' It's been a blast," enthuses Donaldson.

"It's a challenge because I still get two hours of this conversation and I have to create a 45-minute cohesive, flowing, gripping kind of podcast out of it."

Guests for "Sounds and Vision"'s second season included guitarist Elliot Easton (The Cars), radio personality Dave Kaufman, rock photographer Gered Mankowitz and guitarist Johnny Marr (The Smiths). Though the show is currently on hiatus until Season three, Donaldson has picked up other podcast clients in the meantime — most recently, "Spot Lyte On," hosted by tech-entrepreneur Lawrence Peryer.

While Donaldson's connection to music — as well as the business of producing music — is stronger than ever, he's also found time for domestic bliss. He married longtime girlfriend St. Clair in 2019. A vegetarian of long standing, Donaldson recently discovered vegan cooking. He reportedly makes a mean enchilada. In fact, he's also making his own hot sauces — using fresh datil, habañero and ghost peppers grown by St. Clair — which we sampled on a recent visit.

And finally, there's Kitten School: a foster group for cats run by St. Clair with its own YouTube channel. (Editor's note: We can personally vouch for their very good deeds.) At any given time, there might be up to a dozen kittens — mostly temporary fosters, with a few permanent residents — scampering about their home.

As Donaldson's love of felines equals his musical passions, he's been all too happy to assist with Kitten School's marketing and hands-on videography.

Was this a reactionary maneuver? A creative reset inspired by Eno's Oblique Strategy cards? Or something more thoughtful?

"I'm interested in danceable music — but I'm not really interested in 'dance music,'" says Donaldson. "I have plans to do a lot more stuff with it; I think about it all the time. But I put little roadblocks in my mind until I get to it like, 'Oh, I need to re-arrange my office.'"

Donaldson's explanation made us think of something he said earlier about DJing beginning to lose its appeal over his decades-long journey. Not surprising — it's about music becoming regressive and nostalgia-seeking. Another scene celebrating itself?

"A lot of the music started sounding less like the future to me. And more like the past. I just can't get excited by things that are really backwards-looking," says Donaldson.

But like the many threads running through his life, the proverbial silver lining outshines everything else.

"I'm not saying I didn't enjoy it up to the end. I mean, there were things I really enjoyed. I enjoyed a lot of the camaraderie with the other people. I met so many amazing people who had the spirit of what brought me into it. And also a lot of people that were looking to the future in the music and where it could go."


–
Stay on top of Central Florida news and views with our weekly newsletters, and consider supporting this free publication. Our small but mighty team is working tirelessly to bring you Central Florida news, and every little bit helps.
Scroll to read more Music Stories + Interviews articles