Night of the lepus 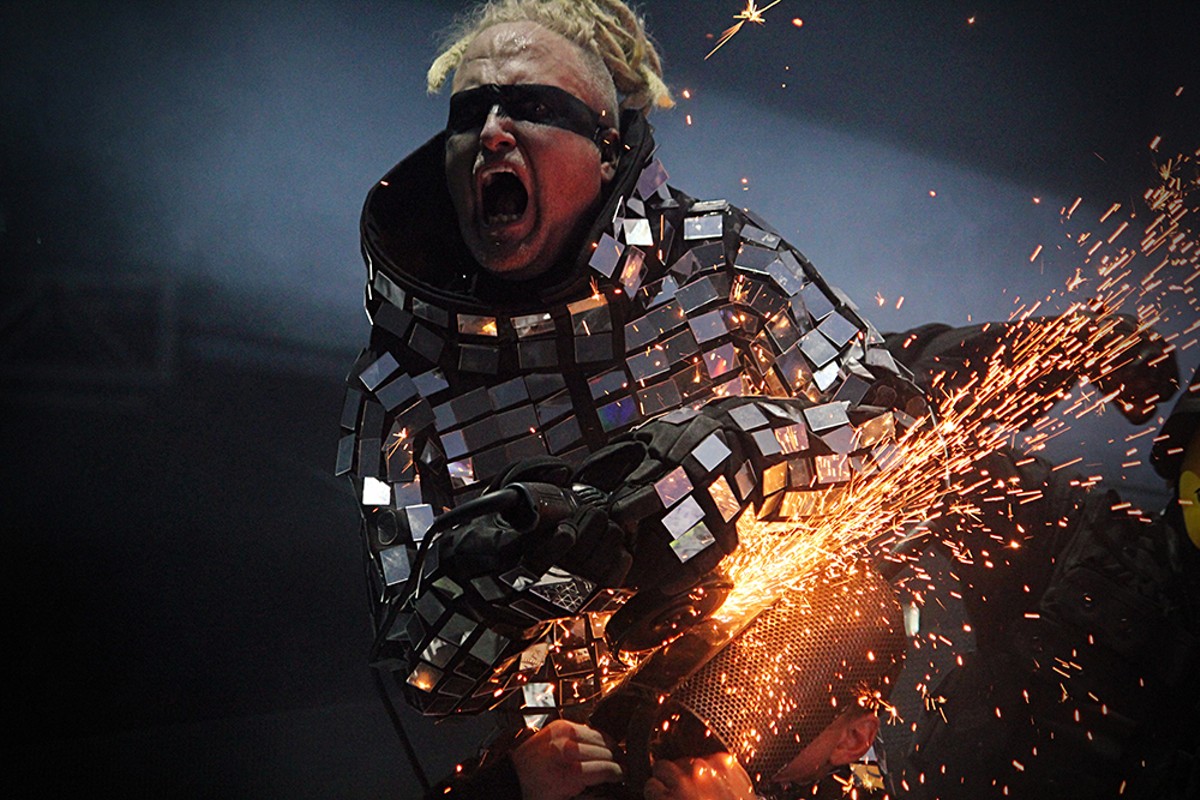 Buzzsaws, armor, dancers, lights, projections, plastic bubbles, pyrotechnics, disorientation: all in a night's work for Tampa rave veterans Rabbit in the Moon. RITM – the duo of Dave (DC) Christophere and Bunny – have been making music and shocking audiences with their live performances since a chance meeting in 1991. After watching Bunny perform with industrial group Gog, Christophere was inspired to work with Bunny on a project that was to be "a type of performance art with video projections," saying Bunny was the final "piece of that puzzle."

Along with former member DJ Monk, Bunny and Christophere created an immersive theatrical and musical experience that was at the time without peer in the dance world. RITM's live shows were so far over-the-top that chemically refreshed concertgoers witnessing their live performances would be forgiven for feeling alternately hypnotized, sucked into the void, abducted by aliens, or perhaps even all three at once.

Despite international recognition, RITM started as a uniquely Floridian phenomenon. In the 1990s, Orlando was the epicenter of an underground electronic music subculture in Florida that was simultaneously simmering in metropolitan locales such as London, Miami and New York. The rave revolution had begun and clubs in the City Beautiful such as the Edge, Firestone and the Beacham hosted all-night (and often into late morning) raves that saw the rise of the DJ as performer. Rabbit in the Moon were the scene's demented pied pipers, with bigger beats, bigger live spectacle and high-profile attention from the likes of Goldie that brought them huge crowds wherever they played.

The band's success in Florida helped foster the rave and EDM scenes still going strong here with a new generation of dance devotees. At the same time, RITM maintains their own very dedicated fanbase on a near-Deadhead level. They flock to RITM's live shows to drink in techno-trance beats juxtaposed against a light show that challenges viewers' ocular fortitude, all fronted by hype-alien Bunny's pyrotechnic tricks and interactive performances that reach out and touch concertgoers in a very real way.

RITM's reach extended beyond the dancefloor as they crossed over into the rock and pop worlds with ease in the '90s, remixing tracks for the likes of the Smashing Pumpkins, Sarah McLachlan, BT, Paul Oakenfold, Stone Roses and Garbage. The RITM collective realized early on that most record labels wouldn't be able to keep up with their prodigious output and seized the means of production, starting the Hallucination label, which Christophere says serves as "the home base for all of the music that was produced." While Christophere and DJ Monk worked to put out music on the label, the band was simultaneously setting the tone for bigger, faster, louder live sets in the rave scene on par with Prodigy, triumphantly headlining the first Ultra events in Miami as well as EDC in California. RITM hit the road hard, taking their psychedelic alien musical carnival to audiences at festivals across the world until they disbanded in 2010.

Following a seven-year hiatus, Bunny and Christophere regrouped to play the 2016 Ultra Festival, complete with new music and an even bigger (always bigger) production. Christophere describes the reunion as full of "tears, hugs, plur [peace-love-unity-respect] and especially dancing." Very promisingly, the Ultra setlist included original as well old-school RITM tracks. RITM's show at the House of Blues (deliciously ironic given Disney's not-so-tacit distaste for the local rave scene in the '90s) this Saturday is a long-overdue reintroduction to their home-away-from-home, Orlando, and a celebration of the release of a new mini-album, Seven Loves Electro, named after Bunny's daughter Seven. "Every time ... electro was being played around the house she would always move and seem to dance," explains Christophere. You'd be wise to follow suit this weekend.