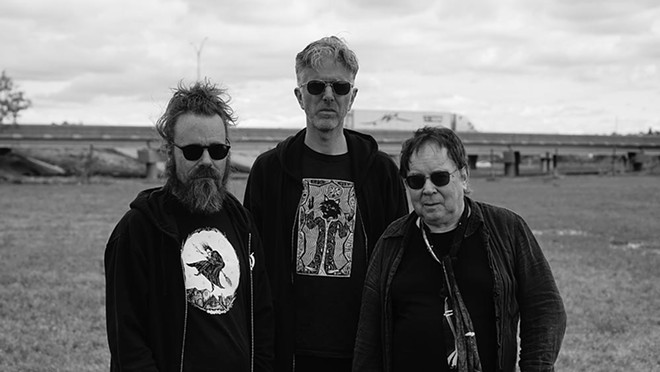 Frontman and lyricist Edward Ka-Spel, of the long-standing post-punk, avant-garde and spell-binding music experience the Legendary Pink Dots, has no intention of slowing down lest life catch up with him.

For the band’s recent online “Hallowe’en Special,” Ka-Spel chronicled a close encounter with the fragility of life’s interconnectedness — a real and recent story of jaywalking as a vehicle dangerously shared the same lane — his quiet, ethereal voice hovering over lugubrious music with an impassioned reflection: “To pause is to realize how big the picture really is, and be overwhelmed.”

Indeed, there’s been no pause for Ka-Spel in the 41 years since the creation of the Pink Dots. And despite the world coming to a devastating halt in the spring of 2020, Ka-Spel has been as prolific as ever, releasing four solo albums in the first four months of this year, as well as the latest Pink Dots album, The Museum of Human Happiness on Metropolis Records.


Writing and recording The Museum of Human Happiness during the quarantine period of the pandemic, Ka-Spel was afforded the opportunity to obsess over sound and quality.

“I’m a very sort of finicky person when it comes to sound quality, and I’m very lucky I’m in a band full of professional sound engineers,” Ka-Spel says. “Not myself, but Erik [Drost], the guitar player, and Randall [Frazier], who is as well. They know all about getting the best sound out of anything, so [of] course that really helps.”

Separated physically from each other, the band members instead shared recordings of their individual parts through cyberspace. “We had the luxury of time, and it’s always good to have that time to be able to dot all the i’s and cross all the t’s,” says Ka-Spel.
Musing over the acceptance of human mortality, the cycle of artistic output, the horrors of a global pandemic and the crushing Russia-Ukraine war, Ka-Spel put pen to paper to process the world around him.

“It makes you want to scream, and the way I tend to scream is through what I write,” says Ka-Spel.

In an ever-more uncertain reality, Ka-Spel is sure of one thing, and that’s enough to keep him going: “This is what I do. It feels like a calling, and you have to answer that calling.”

With the recent retirement of longtime collaborator, creative foil and Pink Dots mainstay Phil Knight (aka the Silverman), Ka-Spel is the last standing founding member of the Pink Dots. The departure of Knight from the band doesn’t diminish the sense of family Ka-Spel feels with his current touring lineup, however.

Randall Frazier (also of openers Orbit Service), stepped in for Silverman and has been regularly touring with the Pink Dots for the last 25 years. Ka-Spel describes the band’s current lineup as “different variations of the same family every night.”

Orlandoans are in for a post-Halloween treat with the Dots coming to town on Thursday. It’s their first return to Florida in many years, and they’re bringing along rare solo LPs and other mouth-watering merch. Ka-Spel himself makes a habit of mingling with the crowd after the show. And as surreal as it is for audience to see the magus-like Ka-Spel wandering quietly amongst them, it’s in some ways just as odd for Ka-Spel these days.

During the pandemic, Ka-Spel wondered if this were the end of the longest and most enduring careers in alternative and post-punk music. “I won’t deny there were times when I thought, ‘That’s it,’” says Ka-Spel. “It felt really like now it’s as if life stops.”
Ka-Spel’s albums are not the only thing he brings an intensity to; his stage performance is a transcendental experience, up there with mystical worthies like Syd Barrett and David Tibet.

“It’s a very, very intense time. You want to go to the edge, and you want to at some point sort of step over that edge, so you feel like you are in a kind of … I call it the zone,” shares Ka-Spel.

“It is the fragility of life and the blessing of being able to do what I do,” says Ka-Spel. “I feel like an incredibly lucky person to be able to do this indeed, over 40 years down the line from when I began.”
Scroll to read more Music Stories + Interviews articles