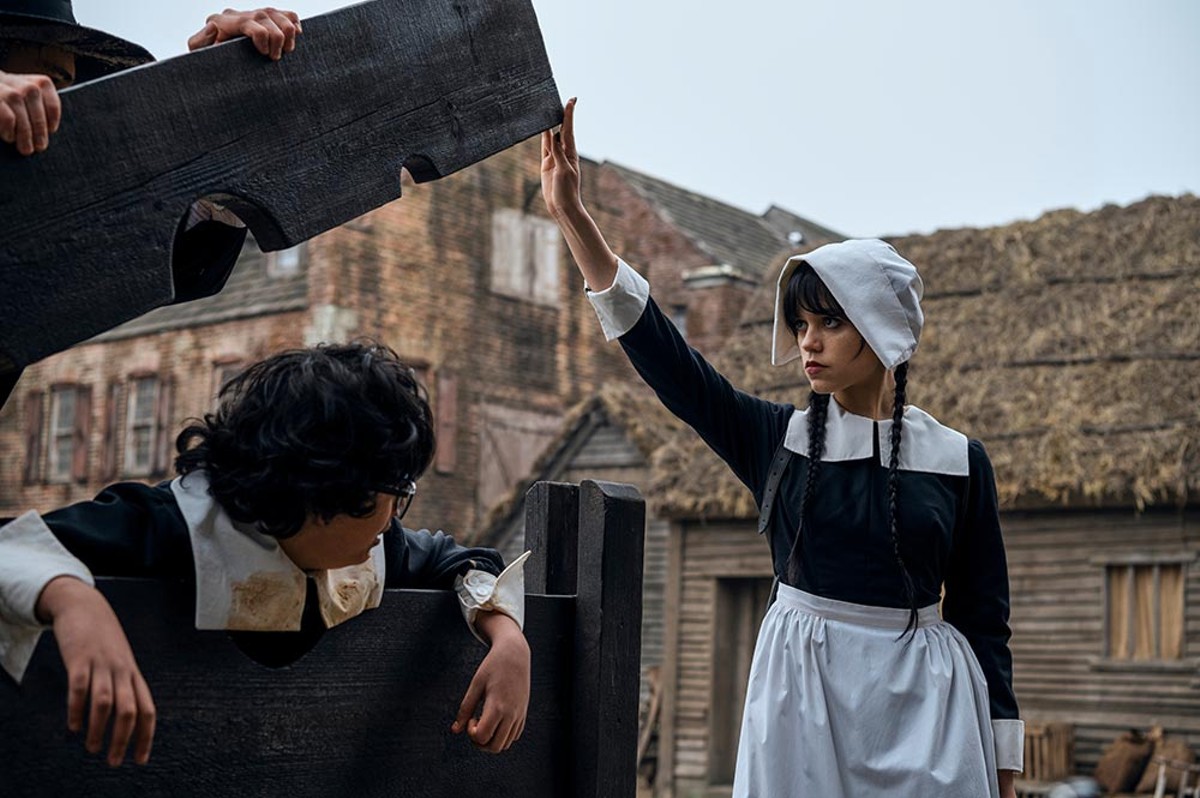 Premieres Wednesday: Christmas on Mistletoe Farm — A British widower inherits a farm, but his children seem to like living there a lot more than he does. Here's a clue for ya, Nigel: In America, we don't let our kids make important decisions like where they're going to live. Or what gender they are! (Netflix)

Daddies on Request — A road trip across Mexico awaits a 13-year-old who hopes to reunite with her estranged mother. Accompanying her on the journey are all three of her adoptive dads. Geez, and she thinks she's entitled to a mother too? Some kids don't even have Fire sticks. (Disney+)

Echo 3 — The search for an American scientist who's gone missing in South America is the subject of a 10-episode series from Mark Boal, writer-producer of The Hurt Locker and Zero Dark Thirty. Yes, there is life after you've gone to war with Kathryn Bigelow. (Especially if your definition of "life" includes being James Cameron.) (Apple TV+)

Pitch Perfect: Bumper in Berlin — This series spun off from the Pitch Perfect movie franchise sees Adam DeVine's Bumper Allen counting on his popularity with the Germans to reignite his career. You know, just like that other guy did in '33. (Peacock)

Taco Chronicles: Cross the Border — Season 3 explores the contributions American chefs have made to the art of taco creation. Just don't get any bright ideas about pineapple, fellas. Save that crap for the al pastor. (Netflix)

Wednesday — Tim Burton and the creators of Smallville try their hand at The Addams Family with a series that shows everybody's favorite goth girl navigating the challenges of boarding school. Christina Ricci is on hand as a teacher, which is kind of like Elon Musk making Tom from MySpace his COO: You don't want everybody to see how it's supposed to be done. (Netflix)

Who's a Good Boy? — Ribaldry reigns supreme in a Mexican comedy about a teenager who's desperate to lose his virginity to the new girl at school. As the Uvalde police would say, "I think the kid has a shot!" (Netflix)

Premieres Thursday: Criminal Minds: Evolution — In a brand-new series, the profilers discover that a mysterious mastermind has used the cover of the pandemic to set up a network of serial killers. Even worse, they all now have parking spaces in Tallahassee. (Paramount+)

First Love — The oeuvre of recording artist Hikaru Otada sparks a J-drama series in which children of the '90s look back on their formative romance. If this show were based on the music of Taylor Swift, it would have a higher body count than Dahmer. (Netflix)

Holiday Harmony — Product placement for iHeart Radio is the reason for the season, as an aspiring singer has to choose between showcasing for the corporate megalith and helping some small-town kids put on a show. Split the difference? Brew some cocoa and sell the kids to Amazon? (HBO Max)

Love, Lizzo — It's "About Damn Time" for a documentary about the transformative musician, so here comes one now. Keep watching for the heartwarming climax, in which Lizzo offers an olive branch to her detractors by playing James Madison's flute THROUGH HER ASS. (HBO Max)

The Noel Diary — What would you do if you had to go through your dead mother's things and you discovered a diary that held all her most closely guarded secrets? In a movie like this, you'd probably seize the opportunity to heal your long-festering emotional wounds. In real life, you'd be scanning for mentions of the Kennedys and DM'ing Joyce Carol Oates. (Netflix)

Premieres Friday: Blood & Water — The students of South Africa's Parkhurst High are in fresh danger in Season 3, with their efforts to bring down human traffickers making them prime targets for kidnapping and attempted murder. On the bright side, if they survive, they're sure to get a podcast on Discord. (Netflix)

Ghislaine Maxwell: Filthy Rich — Filmmaker Lisa Bryant follows up her documentary Jeffrey Epstein: Filthy Rich with a profile of the notorious child rapist's right-hand woman. Bryant clearly isn't going to rest until she's exposed everyone who inhabited Epstein's degenerate world, with docs doubtless to come about ... aaaaand they got her. (Netflix)

The Guardians of the Galaxy Holiday Special — Now that geek culture has rehabilitated even The Star Wars Holiday Special, everybody gets to have one! And there's no crew more appropriate to the idea than the Guardians gang, who have 40 minutes of screen time to find the perfect present for Star-Lord. Featuring Kevin Bacon as himself, because what this thing really needed was more irony. (Disney+)

The Hip Hop Nutcracker — Run-DMC's Rev Run narrates a filmed version of the touring spectacular that transports the holiday ballet classic to modern-day NYC. Expect street cred to burn, thanks to the appearances of rap godfathers Kurtis Blow and Mikhail Baryshnikov. (Disney+)

Korea No. 1 — A comic, an actor and a volleyball player travel across Korea to learn the ways of their country's top artisans. In the process, they're competing for the title of "No. 1 Apprentice." Right, because the quickest ticket to cultural currency right now is becoming known as "the Korean Omarosa." (Netflix)

The Last Dolphin King — Netflix is still searching for the next Tiger King, as evidenced by this series about late dolphin trainer José Luis Barbero, who was hounded by accusations of animal abuse before he turned up dead in 2015. For the record, Carole Baskin was at the movies that day. (Netflix)

Premieres Monday: Mickey Saves Christmas — The stop-motion antics are inevitable after Mickey Mouse's dog, Pluto, manages to lose all the presents from Santa's sleigh. Well, almost all of them: I bet he kept a plush Mei Panda to hump. (Disney+)

Premieres Tuesday: Behind the Music — New episodes feature profiles of Jennifer Lopez, Boy George, Jason Aldean and Remy Ma. That's five solid hours of addiction, incarceration, tragic death and butts! But if you're pressed for time and want to squeeze it all in at once, the remastered Mötley Crüe episode drops the same day. (Paramount+)

Casey Anthony: Where the Truth Lies — In a miniseries all of Central Florida is going to lambaste and then watch anyway, the acquitted child killer gets to tell her side of the story. And if you think that's bad, wait until George Zimmerman shows up on Love Is Blind. (Peacock)

Crime Scene: The Texas Killing Fields — A years-long spate of murders is recounted in a documentary that focuses on the grieving families' quest for justice. Adding insult to injury, the killer just got 60 percent of the vote for governor in their district. (Netflix)