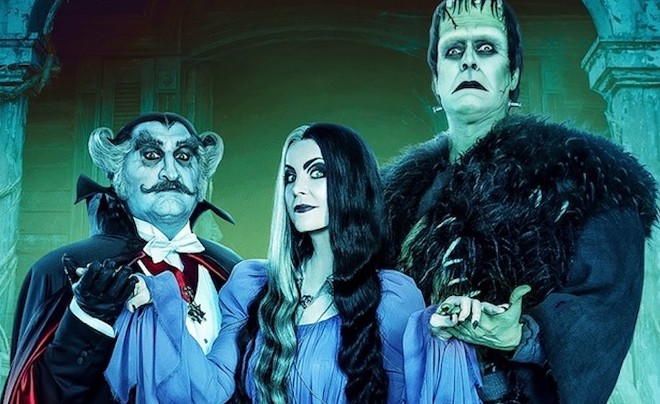 In attempting a prequel to the classic 1960s sitcom The Munsters, ghoul-rocker-cum-auteur Rob Zombie proves that merely appreciating a property doesn’t qualify you to reanimate it. Even if you have a lab.

Oh, the movie is a loving homage, all right — at least on the surface. The screen is simply loaded with Easter eggs. Look, there’s Lester the werewolf! And Uncle Gilbert the lagoon creature! And Zombo the kids’-show host! If a character or reference got more than five minutes of screen time on the original series, it’s fair game for inclusion here.

The problem is, it’s all garnish and no meat. Zombie has zero ability to structure a story: While his flick feels nearly interminable at 110 minutes, entire sections of plot seem to be missing, or at least glossed over. And he doesn’t know how to tell a joke, torpedoing the few gags that might have worked by underlining them three and even four times. This isn’t vaudeville; this is an American Legion talent show posing as a Friar’s Club roast.

In that context, the filmmaker’s decision to work in garish, Creepshow-esque color instead of period-authentic black and white seems less like a misstep, and more like an unintentional but welcome distraction from the loudly flatulent script. Even the premise is somewhat dodgy: Back in the day, a Transylvanian mad scientist assembles a creature with the body of a bruiser and the brain (literally) of a failed stand-up comic. A vampire’s daughter falls hard for the big galoot, to the consternation of her crusty old dad. And he’s right to be worried, because the blossoming courtship threatens not only his peace of mind but the family fortune itself.

The first 30 minutes are cribbed unabashedly from Young Frankenstein, a sure sign that Zombie is suffering from a serious case of Dunning-Kruger. Who even attempts that? Yet even if the swipe had worked on its own terms, it would still have missed the point. Back in the ’60s, the crucial conceit of The Munsters was that these outwardly terrifying freaks were really an all-American family at heart. It takes Zombie an hour to even get his characters out of the Old Country, and another 20 minutes to bring them to the States. By that time, the picture’s almost over, the suburban satire has been reduced to an afterthought, and you’re wondering what anybody involved thought they were trying to accomplish in the first place.

Lead portrayals that are nearly unwatchable don’t help matters much. Remember that episode of the original show in which incipient pop stardom threatened to turn Herman from an endearing manbaby into a serious asshole? (Heck, remember when the same fate almost befell just about every lead character of every primetime comedy?) Jeff Daniel Phillips’ Herman is written and performed as that obnoxious boor almost 100 percent of the time — albeit with the addition of a squeaky, hiccupy voice that makes him sound like a newly pubescent Foster Brooks. Meanwhile, as Lily, Sheri Moon Zombie is as dire and sub-professional as you would suspect. Her only perceivable acting technique is to point her index fingers toward the sky and emit every line of dialogue in a flurry of breathy exaggeration that suggests The Dick Van Dyke Show’s Laura Petrie being drained of oxygen. Daniel Roebuck’s Grandpa is the default winner — not because he’ll make anyone forget Al Lewis, but because in the land of the blind, the one-eyed man who can give a workmanlike performance is king. (He gets one of the only honest, un-belabored laughs in the entire movie when, thinking about a former wife, he muses that he really “dodged a stake” with that one.)

Cameos from the likes of Cassandra “Elvira” Peterson contribute little beyond future game-night fodder for trivia hounds. Former Cinderella drummer Fred Coury provides the voice of the family’s pet raven, and knowing that factoid is more fun than 99 percent of what you’ll get from this film. Somebody save me, indeed.