Premieres Wednesday: The Andy Warhol Diaries — Let's say you're making a docuseries about Andy Warhol. You've got the requisite archival footage and modern-day interviews with luminaries like John Waters and Rob Lowe. What you're missing is audio of the quintessential pop artist himself reading aloud from his diaries. What do you do? You program an A.I. to do it, like a Speak & Spell that thinks it's going to be famous for 15 minutes. Well, that's what you do if you're Ryan Murphy, anyway, and you have no reputation for taste or restraint to sacrifice. (Netflix)

Byron Baes — From Down Under comes a reality series about 14 influencers who live in work in the lovely Australian beach town of Byron Bay. Observed Karl Stefanovic, co-host of that country's Today program: "I'd rather put my eyeball in a cheese grater." Guess that means he's a Squid Game man. (Netflix)

The Last Kingdom — The fifth and final season of the medieval drama introduces a new antagonist in the form of Constantin, a character based on the real-life Scottish king Constantine of Alba. And sadly not on Constantine the evil Kermit from Muppets Most Wanted, because imagine the memes that would have generated. (Netflix)

Queer Eye Germany — The beloved makeover franchise hits Deutschland in its first-ever international edition. Gosh, I don't know how they found five Germans who were willing to pass judgment on anybody. (Netflix)

Premieres Thursday: Bust Down — SNL cast member Chris Redd is one of the headliners of a scripted comedy about young casino workers who have to cope with the reality that their jobs offer no hope of advancement. Given that Lorne Michaels is the executive producer, I'm guessing there's some real-world inspiration going on here. (Peacock)

Good Trouble — Season 4 finds our cast of young Los Angelenos once again trying to balance their personal lives with their work in the fields of law clerking, software engineering and bartending. Bartending? Sounds like somebody hit the jackpot! (Freeform, Hulu)

Karma's World — Positive portrayals of the Black experience netted a second season for Ludacris' animated family show, and also got it nominated for three NAACP Image Awards. Now if we could just get the PAW Patrol to end their "Stop, sniff and frisk" policy ... (Netflix)

Kotaro Lives Alone — This anime series about an unsuccessful manga artist who has to take care of a 5-year-old boy was based on ... you got it, a manga. But a popular one! Not the kind that leaves you plenty of free time to look after some snot goblin. (Netflix)

Love, Life & Everything In Between — Egyptian screenwriter Azza Shalaby shepherds an anthology of eight short films that portray matters of the heart as they're experienced across the Arab world. Settings include Lebanon, Palestine, Saudi Arabia, Tunisia, and a few other places Louie Gohmert thinks are Mexico. (Netflix)

The Seed — Outrageous shock comedy ensues when a group of women take in an extraterrestrial creature that subjects them to all manner of horrors by appealing to their protective instincts. I'm telling ya, man: Snot goblins! (Shudder)

Theodosia — The London of 1906 is the setting for a 26-episode adventure series in which the daughter of archaeologists gains fantastic powers from the fabled Eye of Horus. The producers of the show say it follows the tradition of Harry Potter or Indiana Jones, but with a girl as the central character. Nobody tell J.K. Rowling, because I bet she'd think that sounds kinda trans. (HBO Max) 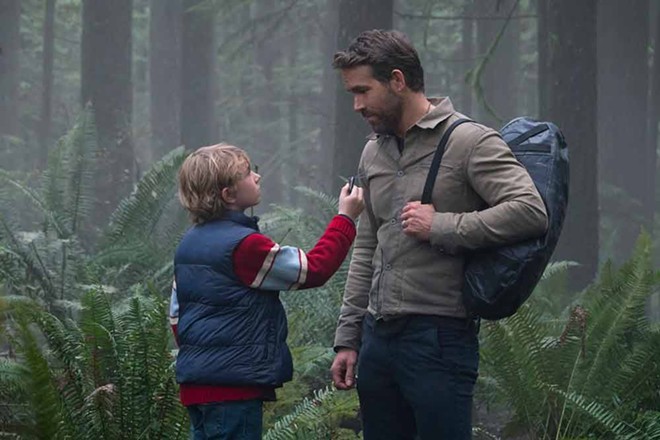 Premieres Friday: The Adam Project — Capitalizing on the success of their Free Guy, director Shawn Levy and star Ryan Reynolds reteam for a sci-fi story in which a fighter pilot from the future returns to our time and encounters his younger self. And that's a serious flight of imagination right there, because we all know this planet isn't going to last into next month. (Netflix)

Formula 1: Drive to Survive Season 4 — Champion driver Max Verstappen declined to participate in this recap of the 2021 F1 season, because he felt previous installments of the series had misrepresented him and what he's about. Oh come on; just because they CGI'd him into a soapbox racer is no reason to get all pissy. (Netflix)

The Last Days of Ptolemy Grey — Samuel L. Jackson portrays a nonagenarian with dementia who retains his memory just long enough to solve a murder. Love that initiative! My own father is in his 90s, and all he's interested in solving is the Wordle. (Apple TV+)

Once Upon a Time: Happily Never After — Lovers from the Middle Ages are reunited in the present to break an evil spell in a musical series that puts a comedic spin on fairy-tale romance. The show was written and shot in Spanish, which means you aren't entitled to laugh when the subtitles talk about "releasing the dragon." (Netflix)

The Snoopy Show Season 2 — Listen, Snoopy. We all thought it was cute when you got up on your doghouse and pretended to fight the Red Baron. But unless you're willing to step it up and protect the airspace above Kyiv, we honestly aren't impressed anymore. Selfish jerk. (Apple TV+)

Life After Death With Tyler Henry — The former star of Hollywood Medium gets a new series with which to reassure us that the deceased love us and want us to be happy. Never mind the dead; I want to know if anybody who's living feels that way. (Netflix)

Pete the Cat — In Part 4 of Season 2, Pete and his pals continue their musical adventures while finding the answer to questions like "What goes honk in the night?" That's easy: a goose with a no-knock warrant! (Amazon Prime)

Turning Red — Originally planned as a theatrical release, Pixar's portrait of a 13-year-old who turns into a giant red panda whenever she gets worked up was busted down to streaming-only just a few weeks ago. I wonder who got to tell her. (Disney+)

Upload — In Season 2 of Greg Daniels' sci-fi comedy, our hero Nathan (Robbie Amell) has to deal with the reality that his girlfriend has followed him into his virtual afterlife so they can work on the relationship. Sounds like this run of episodes should get an accreditation from the American Foundation for Suicide Prevention — because the promise of being single and free in the next world is one of the most popular reasons to yearn for the sweet release of death. (Amazon Prime)

Premieres Tuesday: Adam by Eve: A Live in Animation — New songs by Eve — the Japanese male singer, not the American female rapper — form the foundation of a partially animated, partially live-action story about a teenager searching for her vanished best friend. And now you're wishing it was our Eve, just so you could watch her spend the entire series trying to find reasons not to look for Foxy Brown. (Netflix)

Team Zenko Go — Dreamworks Animation and Mainframe Studios target the preschool set with a series about a quartet of tykes who perform surreptitious good deeds without thought of recognition or reward. OK, fine, I'll take back what I said about snot goblins. But only if the good deed they perform for me is getting me square with my bookie. (Netflix)