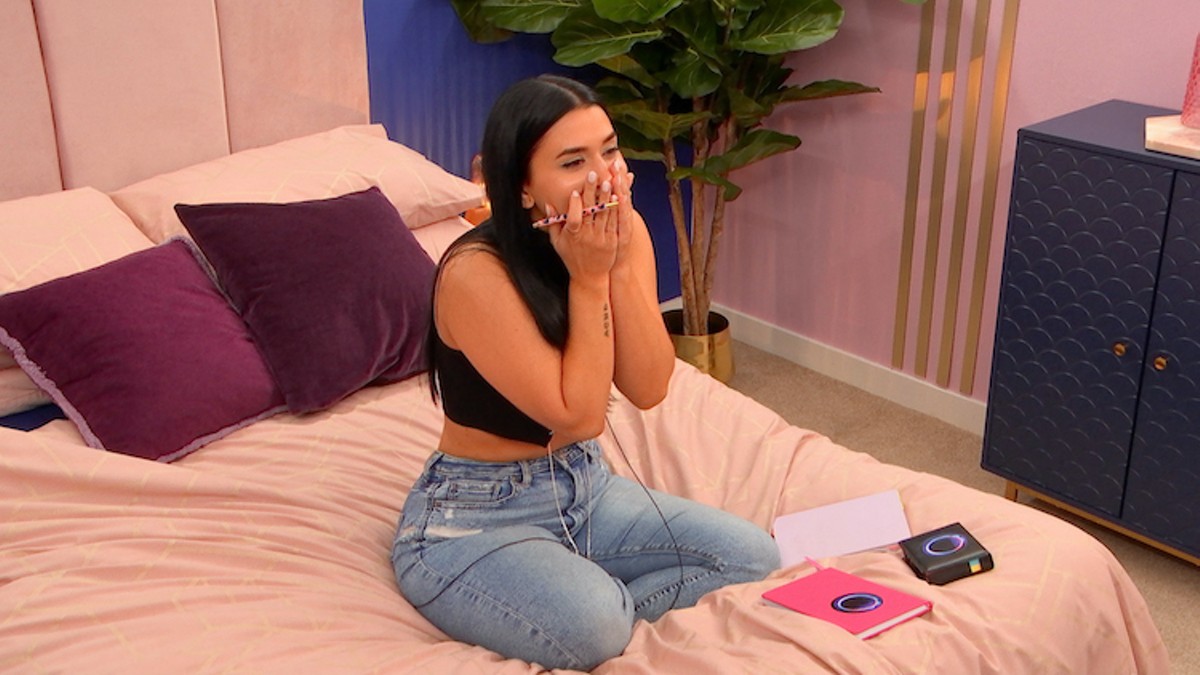 "Spicy" clearly means "behavior that would get your account deleted in the real world." photo courtesy Netflix

The Circle — Netflix is promising Season 4 will be the "spiciest" yet as would-be influencers once again try to catfish one another for money and popularity. Given that last season permitted eliminated players to return under alternate identities, "spicy" clearly means "behavior that would get your account deleted in the real world." Maybe somebody's going to set up an OnlyFans with pictures of their dental hygienist? (Netflix)

El Marginal — The fifth and final season of the Argentine prison drama will depict a jailhouse alliance between gangsters and religious types that involves the extracting of "tithes" from helpless convicts. Scoff if you must, but how else is Paula White going to know God loves her? (Netflix)

Summertime — Wrapping up after three seasons is this Italian-made YA romance that's been following the summer courtship of a former motorcycle racer and a shy hotel worker. If you ask me, wringing three whole seasons out of a story that by definition has to end by September is nice work if you can get it. Keep your eyes peeled for a potential spinoff series, Uncommonly Warm Fall We're Having, Isn't It? (Netflix) 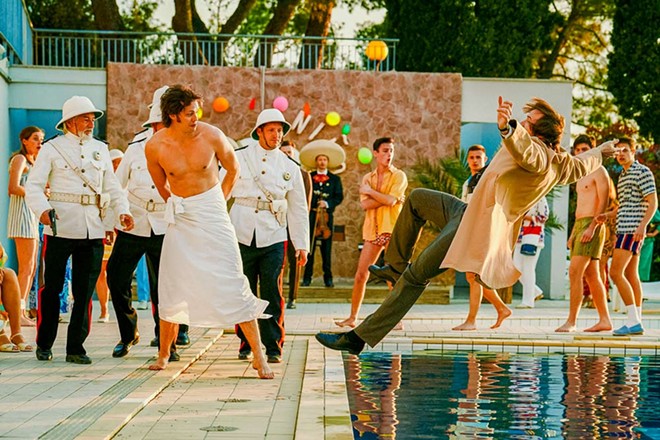 Photo by Nikola Predovic/Netflix
Bill Skarsgård plays a debonair criminal who was known as “Sweden’s answer to John Dillinger” in Clark, Thursday on Netflix

Clark — Bill Skarsgård plays a debonair criminal who was known as "Sweden's answer to John Dillinger," in a drama series that seemingly exists just to answer the question "What's even more fun than Abba and universal healthcare?" I bet a Danish Babyface Nelson could clean up at the Eurovision Song Contest. (Netflix)

The Pentaverate — Playing off a plot point from So I Married an Axe Murderer, Mike Myers presents a six-episode miniseries about a shadowy cabal that secretly runs the world. Myers appears as eight different characters, including a former music manager named "Shep Gordon" — presumably the real Shep Gordon, whom Myers profiled in a 2013 documentary. Talk about making your past work for you. If there are any nods to The Love Guru, will anybody but Myers notice? (Netflix)

The Staircase — Eighteen years ago, the case of crime novelist turned convicted wife murderer Michael Peterson was the subject of a hugely popular docuseries. Now that show has been remade as a serialized dramatization starring Colin Firth and Toni Collette — and Peterson himself is back on the streets, his guilty verdict having been reduced to manslaughter. Prediction: The next iteration of the tale will be a cartoon for preschoolers called Little Mike, by which time Peterson will have won damages from the high-school health teacher who taught him faulty CPR. (HBO Max)

Star Trek: Strange New Worlds — The latest installment in the franchise shows us where the starship Enterprise boldly went back when Christopher Pike was still its captain. From the original series, we know those days ended with an unfortunate exposure to delta rays and Pike becoming a mute zombie in a rolling sauna. But for now, enjoy those innocent years when he could answer a yes-or-no question without proposing to a Roomba. (Paramount+)

Wild Babies — The birthing and parenting rituals of animals from 17 different countries are the subject of this four-episode docuseries narrated by Helena Bonham Carter. And as a helpful FYI, she'll reveal which of the critters are the easiest to bake into pies. (Netflix)

The Big Conn — "Perpetrator of the largest Social Security theft in history" is the superlative history will always associate with Kentucky lawyer Eric C. Conn, here profiled in four documentary episodes that show how he swindled the United States government out of more than half a billion dollars. He's in prison now, which shows what happens when you make bad decisions: If he had gone after Medicare instead, he could have ended up serving two terms as a Southern governor. (Apple TV+)

Bosch: Legacy — Titus Welliver's Harry Bosch returns in a spinoff series that finds the character off the police force and working as a private investigator. His first assignment is to help an ailing billionaire (William Devane) find out if he has an heir who can inherit his fortune. "I can be that heir, no problem!" volunteers every single cast member from The Circle. (Amazon Freevee)

Hatching — Finnish body horror, with a 12-year-old girl raising a second version of herself from an egg she finds in the woods. (And just like that, I think the medium of streaming has discovered its next onscreen prompt. "Finnish body horror?" "No, save for later, thanks.") (Hulu)

LOL: Last One Laughing Mexico — "Doubling up" is the theme of Season 4, with comedians now competing in pairs and host Eugenio Derbez sharing his duties with his son, José Eduardo. Also, the million-peso grand prize no longer goes to the winning comic(s), but to a charity of their choice. "I can be that charity, no problem!" Hey, shut up, entire cast of The Circle. (Amazon Prime)

Marmaduke — The comic-strip pooch stars in his own CGI-animated romp, with his voice provided by none other than Pete Davidson. But apparently, the casting hasn't filled Netflix with confidence, because Davidson speaks not a single syllable in the trailer that's been released. Sucks to be you, Skete! Guess you should have taken that cameo on The Kardashians when Kim wanted to put it in your prenup. (Netflix)

The Takedown — Mismatched cops Diakité and Monge are back in Louis Letterier's sequel to the 2012 French buddy flick On the Other Side of the Tracks. The big comedic twist is that the Black guy has since been promoted over the white guy, which should be positively hilarious and not in any way exploitative of wider cultural resentments. Either way, I'm sure Marine Le Pen will be giving us her reaction in detail, since she has so much free time now and stuff. (Netflix)

The Twin — In what holds the potential to be a sort of sideways Don't Look Now, parents who are grieving the loss of one of their sons learn that he may be trying to contact his twin brother from beyond the grave. Five'll get you 10 he's only trying to find out the kid's Minecraft password, because it's gotta be pretty boring on the other side of that veil. (Shudder)

The Unsolved Murder of Beverly Lynn Smith — The docuseries format provides a platform to reopen the case of Ontario native Smith, who was found dead in her farmhouse 48 years ago. The coroner's biggest challenge: determining that she was actually deceased and not merely Canadian. (Amazon Prime) 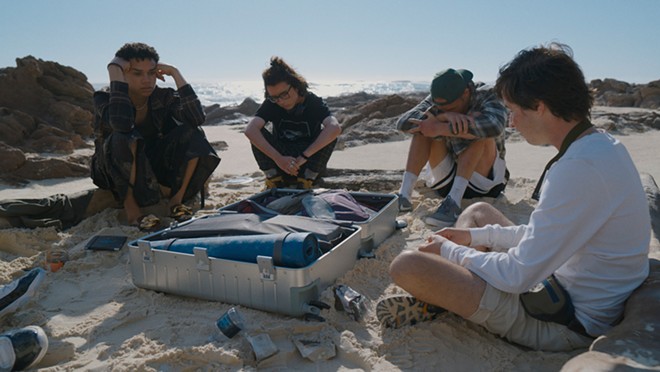 The Wilds — In Season 2, the eight teenage girls who have been stranded on a deserted island find new ways to pull together and avoid going all Lord of the Flies on one another. In the case of Toni and Shelby, that means exploring a deepening same-sex romance. So if you're keeping score at home, that's lords 0, flies 2. (Amazon Prime)

Candy — Jessica Biel takes the lead in a miniseries inspired by Candy Montgomery, the Texan who murdered her lover's wife with 41 ax blows but was found not guilty by reason of self-defense. Even as the show drops, HBO is preparing its own take on the material, with Elizabeth Olsen in the lead role. Careful, Jessica! She can move those cleavers with her mind! (Hulu)

Workin' Moms — Season 6 of the hit comedy about the career/parenting balance has already been seen in its entirety in its native Canada. Hopefully, it'll make more of an impression here than certain other things Canada gets first. Like trucker convoys. (Netflix)