Now more than ever, these words are applicable to the 1987 Orlando-based (title of the film notwithstanding) action film Miami Connection.

Whether or not the film's humor was intentional is irrelevant — what does matter is that this film, more popular than ever, has entered the exclusive realm of Forever. Forever plus five, in fact. And to celebrate this 35th anniversary milestone, the cinephiles of Enzian Theater have set aside one of their "Freaky Fridays" for a midnight screening of this timeless tale of — among other things — ninjas, bikers, synth-pop bands with "a new dimension in rock & roll," ninjas, UCF students, fourth-place computer-programmer teams, cocaine traffickers, ninjas, club owners who beat up disgruntled former house bands and — oh yes — ninjas.

No one is going to say that Miami Connection put Orlando cinema on the map during the quixotic years of what we hoped would be "Hollywood East" back in the pre-Jeb! era of the City Beautiful in the 1980s and '90s, but by this point, there is no question that Miami Connection has kept Orlando cinema on the map. Nobody's talking about other movies from that time filmed in Orlando like D.A.R.R.Y.L. (about a teen robot? can't recall) or Parenthood (filmed here but set in the bucolic St. Louis suburb of Kirkwood for some reason). But Miami Connection maintains a devoted fanbase and remains relevant as a treasured piece of Orlando history.

In a recent live taping of the podcast "How Did This Get Made?" in Los Angeles, host Paul Scheer was effusive in his praise of Miami Connection, and everyone in the room agreed, (mostly) devoid of irony, that Connection soundtrack centerpiece Dragon Sound was/is a kick-ass synth-pop group.

On YouTube, users obsessed with both Miami Connection and finding movie and television filming locations have meticulously tracked down where, say, on the UCF campus Y.K. Kim grabbed the nose of fellow Dragon Sound member Vincent Hirsch with his toes during a Tae Kwan Do practice sesh, or where exactly on Church Street that Dragon Sound took on biker bullies fond of swinging chains and awkwardly pouring beer on their hated rivals.

Those same intrepid YouTubers even managed to find the house where Jim (played by the inimitable Maurice Smith) stood by the mailbox and gave the world the immortal "My father!" scene. This is a scene that, arguably, is now as immortal as Brando's "Stel-lahhhh!" in A Streetcar Named Desire, or Harry Dean Stanton's "Boys! A-venge! Me. Ah-venge meee!" in Red Dawn. And while those of us who live here should make a point to find the Thornton Park-adjacent house to re-enact the scene posthaste, it's probably best to keep it a secret from the larger public. Not so much out of consideration for the people who now live there, but more to ensure that Buddy Dyer doesn't get it torn down, citing the well-worn "God forbid we have and keep anything cool here" clause in Orlando's urban planning manual.

There probably isn't enough time — especially in the context of the Q&A format, with the insufferable yet inevitable "I have a comment and a question" types in the audience eager to wax pompous — to truly get a sense of how utterly surreal it must be to still be talking about something you did back in the '80s. Something that died an ignoble death and languished in obscurity ... before a 21st-century rediscovery via eBay led to Alamo Drafthouse screenings, cult infamy and a place in the oddball canon.

Was Miami Connection's phoenix-style rebirth accidental? Sure. But in art, the unintended is often where the magic happens. The Ramones wanted to write a bubblegum song like "Saturday Night" by the Bay City Rollers, instead missing and transcending the mark with "Blitzkrieg Bop." And we all know which song gets more airplay at sporting events these days. Orlando martial-arts instructor and Connection star Y.K. Kim wanted to be part of the '80s trend of ESOL iconic kickass action heroes, with the added bonus of conveying a message of world peace and nonviolence (and, hey, maybe even promoting his Tae Kwon Do schools a little), and while it didn't exactly work out that way, it's literally impossible to find any other pacifist messages communicated via scenes of ninja decapitations and gratuitous biker titties.

As with Herman Melville's Moby-Dick, there is much debate as to what Miami Connection is really about. And like Moby-Dick, we may never really know for sure what this film is supposed to be about. This is a movie almost impossible to summarize in a sentence or two, such are the whiplash plot twists. Is the focus of the film meant to be on the battle of the bands, the aforementioned struggles with ninjas, the drug-dealing gang war on the mean streets of Orlando, the Romeo and Juliet–style subplot between John and Jane, the importance of good Tae Kwon Do fundamentals? Or is it the last-second introduction of the subplot of Jim's lifelong search for his father? (Which lead's to Mark's/Kim's blurting out that all the men of Dragon Sound are orphans.)

Everyone's right and everyone's wrong, but if there are two undeniable takeaways, they are: No. 1, Miami Connection is so much fun and kicks so much ass and has so clearly stood the test of time, and No. 2, we in Orlando have absolutely no use for Miami and its "stupid cocaine." So if you're coming up here with your motorbikes laden with that stuff, don't even bother to try, unless you want to be filleted with a ninja sword. 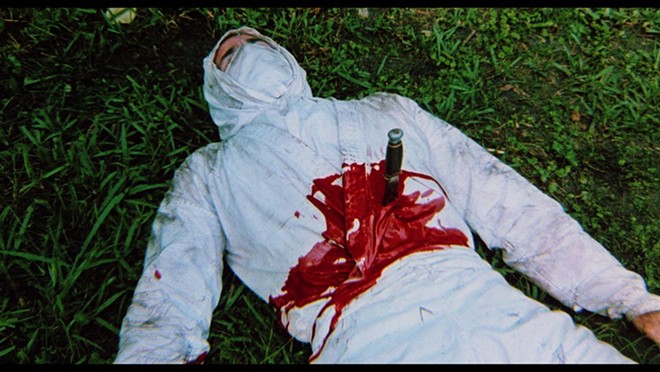