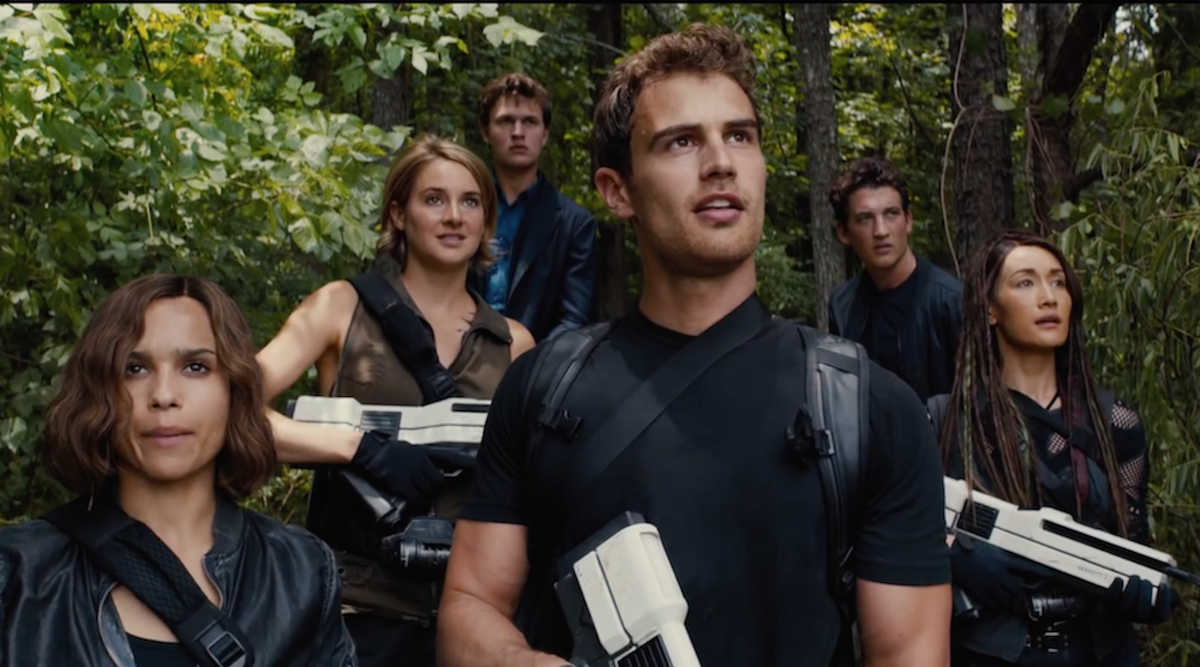 Up until now, I've been on board with the dystopian adventures of Tris Prior (Shailene Woodley) and her life in a post-apocalyptic future Chicago. However, this third outing of the Divergent series – with the fourth and final installment due next year – is a disappointing comedown from the first two films. They just skated by on the novelty of a very cool female action hero and the appealing metaphor for the struggle against enforced conformity that her world offered. Here, in Allegiant, based on the first half of the novel of the same name, the reasons for the apparently precarious foundations of Tris' world are revealed, the metaphor suddenly fails as a metaphor, and the concrete reality it is replaced by is far less intriguing.

Classified as dangerously "divergent" in a society where almost everyone is easily slotted into five "factions" based upon their temperament and skills, Tris had been leading a fight in the first two films, Divergent and Insurgent, to regain control of the city of Chicago from a ruthless leader cracking down on Divergents and the rogue Factionless. At the end of Insurgent, that culminated with the revelation that Chicago was the site of a grand experiment, that the rise of Divergents meant the experiment had been a success, and that the people of Chicago were welcome to rejoin the rest of humanity outside the wall that had contained them. So there's a big decision to be made as Allegiant opens: Should they go out to meet the people who have been experimenting on them all of this time, and if so, how can such people ever be trusted?

Factionless leader Evelyn (Naomi Watts), effectively in control of the city and inciting mob hatred against the defeated Erudite Faction, has pushed Chicago to the brink of total civil war, and perhaps those unknown outsiders can help restore some peace. So off go Tris, her boyfriend and lieutenant Four (Theo James), and a handful of others, over the wall and through a blasted and inhospitable hellscape to see what – and who – is out there.

The small pleasures of getting answers to the mysteries of Tris' world are instantly overwhelmed by the practical considerations of what those answers bring ... and those aren't, alas, further questions and more intriguing mysteries, just accidental conundrums of plot and character that smarter scripting and more cohesively considered world-building could have avoided. (I haven't read Veronica Roth's Divergent novels, so I cannot say whether these problems exist in the books or are unique to this adaptation.)

There is one honking huge plot hole here that brings the entire story crumbling down into the obvious. Without spoiling, it concerns a matter of how order and control are handled in the city Tris and her friends discover beyond the wall. There would barely be a story if they had discovered this one thing, but that's hardly an excuse, and no one among the people they encounter even seems to consider that it was an option. We see it, though, and the stakes for the experimenters – led by David (Jeff Daniels) – are so high that it is wildly implausible that it was not part of their plan all along.

Between that plot hole and the loss of the metaphor about conformity that has informed Tris' journey up till now, all we're left with – if we want to find anything of substance and meaning in Allegiant – is a weak and barely acknowledged philosophical clash between Tris' young and eager idealism and the messy, complicated reality she discovers beyond the wall.

Even that quickly gives way to the dullest sort of black-and-white, good-versus-evil battle that throws away the potentially complex sci-fi concepts the movies had been playing with and reverts to a simplistic box-checking exercise in action filmmaking, complete with a ticking-clock countdown. The ending is so foregone as to be downright anticlimactic, and there's still another whole movie sequel to follow this one. I had been looking forward to seeing where Tris' story would go, but after watching Allegiant, I feel as if I can confidently guess where it's headed already.