John Zhao, the Tampa Bay-area restaurateur behind the Yummy House and Sweet Buns brands of restaurants and bakeries, appears determined to establish a foothold in the Orlando market. Earlier this year, Zhao opened an outpost of his Pho 813 concept near the Millenia Mall. Then in April, he opened what's arguably the flagship of his burgeoning culinary empire — YH Seafood Clubhouse — in Dr. Phillips. It's modeled after Fishman Lobster Clubhouse, the famed Toronto restaurant whose soaring salvers of Hong Kong-style seafood have dropped the jaws of many a food personality, including David Chang, Eddie Huang and that Bizarre Foods guy who became persona non grata in 2018 after trashing Orlando's food scene.

When I ask Zhao why he chose to open YH Seafood Clubhouse in Orlando, and not Miami or Tampa, he says that Orlando has a market for this sort of cooking. It's also why he poured nearly $1.75 million into the buildout of the space and hired the designer of another storied Toronto restaurant — Yu Seafood — to deck the place out. In fact, YH's extensive menu has a lot more in common with the elevated and ambitious style of Cantonese cuisine Yu offers than the gluttonous free-for-all at Fishman Lobster Clubhouse. The presentation of mandarin bass ($68) is visually alluring, its fileted carcass sitting upright in dramatic fashion with morsels of the fish, wok-tossed in a peppercorned Sichuan sauce, laid before its curvy skeletal remains. It's a fiery delight. The bass, it should be noted, is flown in from China every couple of weeks, so the carbon footprint is somewhat heavy, like the price. 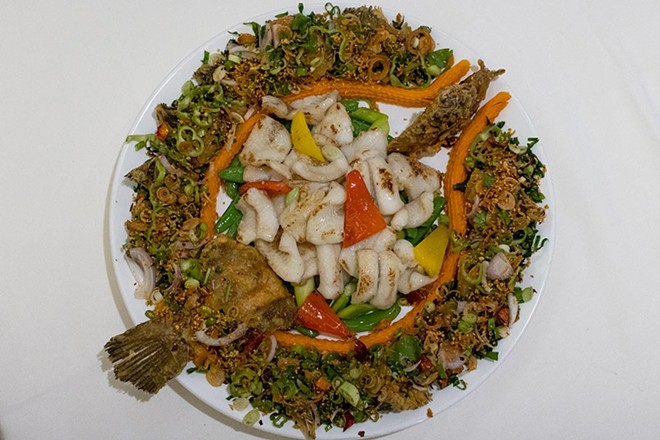 The presentation of the flounder ($52) is just as dramatic, with the head, fins and tail fried in salt and pepper and the fillet sauteed in a wine sauce with snap peas, asparagus and bell pepper. It's showy fare, but not garish in the least. Same goes for jumbo oysters ($15) from Washington State graced with garlic-soy and black bean sauce, and an exemplary dish of osmanthus clams (which are really the innards of the sea cucumber) and emperor clams (also known as Pacific mud clams) slicked in a balanced XO sauce.

Zhao brought in cooks from New York City to run YH's kitchen and, no question, all that experience shows. Ribeye ($45) is hardly a dish that comes to mind when dining at a Cantonese restaurant but at YH, it should be. "I've never had ribeye this tender," says our experienced server, and he's right. The soy-marinated, wok-fired chunks were pillows of protein on a plate prettied with assorted mushrooms, onions, slices of orange and a side of veg comprising Brussels sprouts, asparagus, radishes and peppers. Then there's the glorious Hong Kong roast chicken ($28 half; $52 whole) with a skin as crisp as it is gleaming.

But it's really about the seafood here, and the towering pile of fried lobster ($68) is a showstopper. Amid the crustaceous heap: French fries, fried scallions, chilies and garlic. The batter on the lobster has a subtle sweetness to it — "reminds me of funnel cake at the county fair," says one of my dining comrades — and the combination of sweet, salty, buttery and crunchy makes this dish a total ride, so have fun with it.

There's a cocktail menu, and a serviceable wine list, but we were content enjoying it all with Lucky Dragon lager. Oh, and they do offer dim sum: every day from 11 a.m. to 2:30 p.m. Some may balk at the prices, but a meal here is as gratifying for gourmands as it is for 'grammers. Those seafood towers, BTW, can be piled high with Dungeness crab, Alaskan king crab, Crystal Lake prawns and rock fish. Just go for it. This is YH, after all, so Y not.