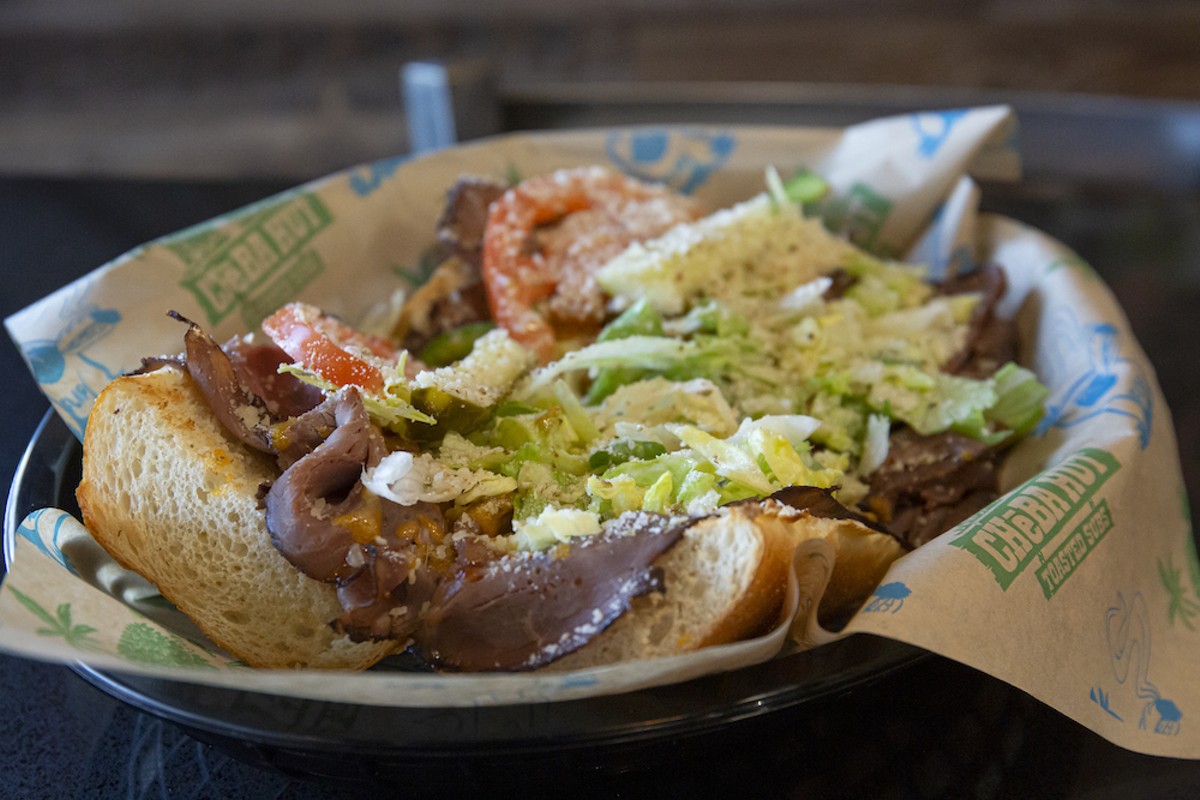 While Florida inches toward decriminalizing the leisurely use of doobage, the recreational scarfing of sandwiches has been legal for ages, and we have Sir Edward Montagu, aka the Earl of Sandwich, to thank for that — dude did for handhelds what Tommy Chong did for weed. But Cheba Hut, newly open on Colonial Drive, rolls both cultures into one big fat joint of an eatery.

Yes, marijuana and the munchies are both celebrated at the city's first Cheba Hut, and the East Orlando location is in close proximity to the chain's primary customer base: UCF students and WMFE on-air personalities. There are punny-named menu items, a thumping soundtrack (Cypress Hill and Peter Tosh get heavy rotation), and wall art that'll either hold your gaze or freak you out, depending on how baked you are.

Looking very much the target customer with my Dave Chappelle mask, I gawked, pointed, giggled and squinted along with my dining comrade at the totally wack Star Wars mural, and we weren't even blitzed. "I wish we were high," the two of us said in near unison, which brings me to my next point — nothing Cheba Hut sells will get you lit.

That is, there's no THC or CBD in any of their menu items. Not even in Sweetwater Brewing's 420 Strain Mango Kush. The beer's dank, skunky nose comes courtesy of terpenes (aromatic compounds) and organic hemp flavors that mimic the funk of weed. Cheba Hut's bread, however, is toasted, and it's a difference-maker as far as the battle of sub shops is concerned. The warm, wide baguette has a thin, crispy crust with a soft core, so a palate-shredder it ain't. 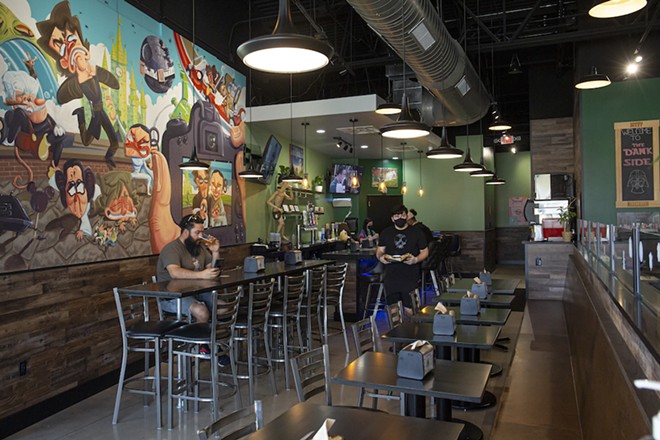 I enjoyed the zingy "Jamaican Red" laden with Buffalo chicken, hot sauce and jalapeños as much as the all-veg "Power Plant" combining, among other ingredients, guac, hummus and feta drizzled with a house vinaigrette.

The key is eating the subs at Cheba Hut, or in your car immediately after exiting the store. If you're getting them to go, just know the bread will likely lose its crispy integrity, particularly when fillings veer toward wet, like the saucy meatball "Bomb" with marinara. And, as I said, the bread is the differentiator.

Not that you should treat take-home sandwiches like dirt weed or anything — the "G-13" weighted with roast beef, turkey, bacon and chipotle mayo made a totally serviceable at-home nosh. BTW: All fillings are also available to be enjoyed in salad form ($10.29) but, again, see note above about the bread.

There are less-substantial "munchies" offered as well. The loaded "not'chos" ($4.79) — Doritos topped with melted cheese, jalapeños, onion, olives, hot sauce and ranch — are, like, the most college creation ever. Pretzel nuggets ($4.79) tossed in garlic butter are best enjoyed at the eatery as well. When they get cold, we found, the bites become a bit too greasy for at-home snacking.

Apart from the occasional customer, you won't find anything fried at Cheba Hut, though you will find peanut butter "goo balls" ($2.99) and cereal bars ($2.89) for a sticky-icky ending.

Oh, and if you're with friends and order a few 12-inch "Blunts," just know they're meant for sharing. So don't bogart your sammies.