Not fancy, but fully satisfying 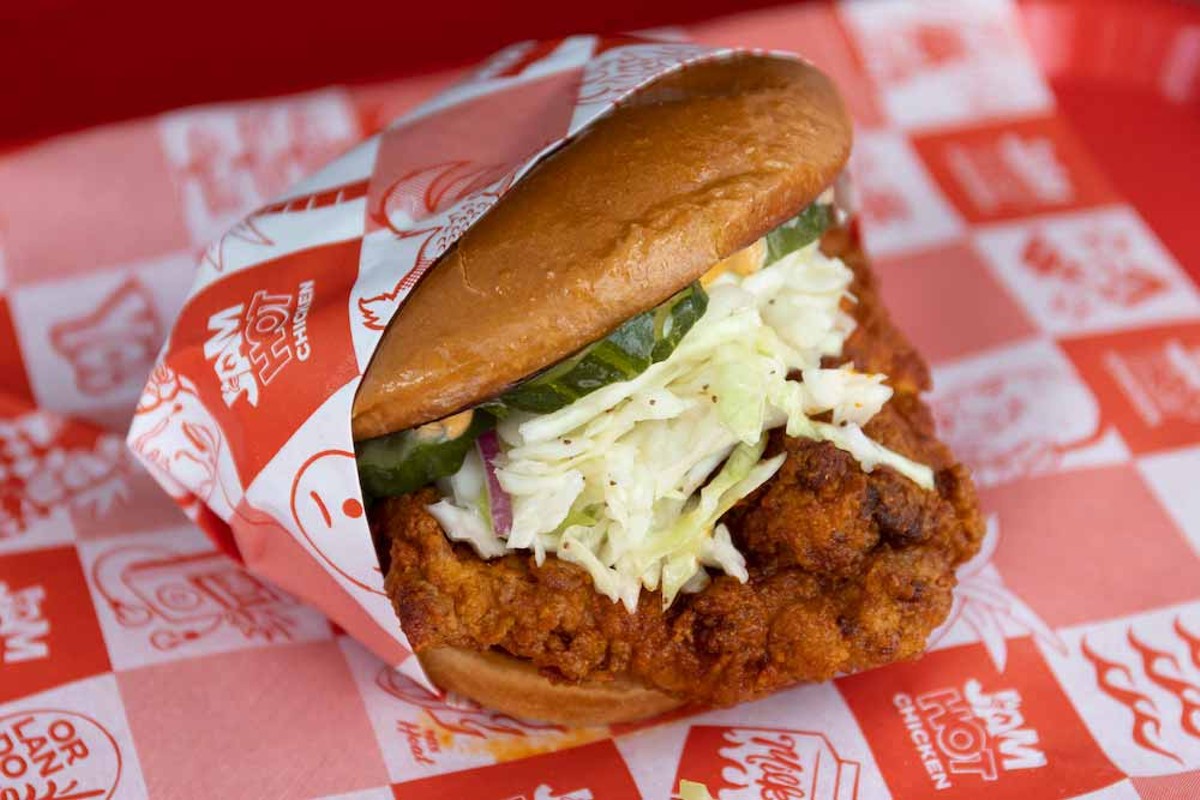 Even in a town with multiple excellent hot chicken options, JAM serves a fabulous chicken sandwich. photo by Rob Bartlett

It has been another rough year for most of the people I know, and probably for you and most of the people you know too. It has also been a rough year for restaurants, but I try to use my food blog and this annual list to boost the signal and let everyone know about my favorite local restaurants and dishes. These Orlando restaurants could all use your support, and we could all use some edible escapism to get ourselves and each other through 2023. Here we go, in no specific order.

I've tried almost everything on Wako Taco's menu over the years, but I always return to this huge, gorgeous chimichanga, the best in the Orlando area. Essentially a deep-fried burrito, it is stuffed with the meat of your choice plus beans, cheese and rice. I recommend the mildly spicy pibil pork. Fried to golden perfection, it is crispy and soft at the same time, topped with diced tomatoes, queso and drizzles of guacamole and sour cream. Don't forget to ask for pineapple hot sauce. This Longwood Tex-Mex spot is connected to Hourglass Brewing, so you can order all your food and eat in the giant adjoining taproom and brewery, but even if you're drinking next door, don't miss Wako Taco's refreshing aguas frescas. (wakotaco.com)

My favorite new pizzeria that opened in Orlando in 2022 is John and John's, specializing in excellent New York-style pizza. I always prefer thin, crispy slices with melty, gooey cheese, hot out of the oven, eaten right in the pizzeria. Pizza — especially NY-style — always loses something by the time you get it home, after it steams in the box. Plain cheese slices at John and John's are $3.99 each, but I jazzed one up with crumbled meatballs and caramelized onions (99 cents each). Also great is the Mediterranean Blue (a tribute to the former occupant of the space), topped with slices of gyro meat, feta cheese, fresh tomatoes, red onion and creamy, tangy tzatziki sauce, on top of the regular mozzarella base. (johnandjohnspizza.com)

George Markward's food truck is already famous with no help from me, after being featured on Diners, Drive-Ins and Dives on Food Network. But Guy Fieri was right to showcase this awe-inspiring pastrami, easily the best I've ever had outside of the legendary Katz's Deli on the Lower East Side. George makes his pastrami from scratch, curing huge briskets for a week. Then he applies his spice rub, smokes the briskets, refrigerates them to make them easier to hand-slice, and finally steams the thick slices on a steam table before building his sandwiches on rye bread he bakes fresh. (Even Katz's doesn't do that — the bread is an afterthought there, more like an edible napkin.) There's no better pastrami in the city, or probably in the South. (pastramiproject.com)

This Puerto Rican restaurant recently opened a second location right near my work, and after one amazing recent meal, I look forward to becoming a regular. The boneless pork leg was marinated, rolled and roasted for hours to absolute tender, juicy perfection — so flavorful, not too salty, not dry at all. The crispy skin was savory, crackly, golden goodness. Even the white rice was deliciously buttery — why can't I ever cook rice this well at home? — and even better when I poured the habichuelas rosadas (stewed pink beans) over it. Pasta salad was full of diced ham and could probably be a meal in itself. Every time I return (which will be often), I hope to try something new, but it's going to be hard to not return to this perfect porchetta. ( crocantekitchen.com)

The first Thai restaurant I fell in love with in Orlando, Thai Singha is good enough to get me to schlep to Waterford Lakes, even against evening rush-hour traffic heading east on Colonial Drive. As much as I love the drunken noodles here, I have to highlight a dish I rarely see on other Thai restaurants' menus: mee grob, a mountain of crispy rice noodles in a tangy, sweet, sour, sticky sauce, mixed with chunks of pork, shrimp, fried tofu, crunchy bean sprouts and diced scallions. It's an ideal appetizer whether you're dining with a group or flying solo. A bit awkward to scoop with forks, you may want to go in pinching with your fingers, stickiness be damned. (thaisingha.net)

For years, I heard references to chopped cheese sandwiches in hip-hop songs. When I found out Ray's Deli and More served them, I drove across town to the Pine Castle neighborhood and found the closest Orlando has to a legit New York bodega — a nondescript convenience store with a nice deli counter inside, serving freshly made sandwiches, prepared foods and more. All it needed was a cat. Anyway, imagine a cheeseburger and a Philly cheesesteak hooked up after a crazy night at the club, and the chopped cheese is their beautiful, greasy love child. They chop up two Angus burgers with onions and peppers on the flattop grill, then place it on a sub roll with American cheese, shredded lettuce, sliced tomatoes and mayo, and then press it like a Cuban sandwich, until the cheese melts. It's true comfort food, and I'm surprised more places don't make their own versions. (raysdeliandmore.com)

The Bravo Supermarket in Lake Nona is the nicest Bravo I've ever been to, but it hides a real treasure inside: the Escobar Kitchen, a micro-restaurant that specializes in sushi with a Puerto Rican twist. Those are two cuisines I'd never think of combining, but I'm glad somebody did. The Paisa Roll combines yellow rice, thin-sliced grilled churrasco steak, chorizo, avocado and cream cheese, wrapped in sweet plantains, drizzled with chimichurri and honey wasabi, and topped with a crunchy, crackly pork rind. This isn't light, like most sushi rolls — it's heavy in every possible way, but also awesome in every possible way. I love creative fusion recipes, and I'm also a sucker for restaurants concealed inside businesses where you wouldn't expect to find them. I wouldn't be surprised if some South Beach hipster restaurant steals this idea and charges triple what Escobar Kitchen is asking. ( theescobarkitchen.com)

This huge "sando" contains a Bell & Evans chicken breast, fried in peanut oil, seasoned to juicy perfection, and served on a buttered bun. But that's not all — JAM tops it with crunchy pickle slices; crispy slaw made with cabbage, red onion, apple cider vinegar and no mayo; and creamy "comeback sauce" I would slather on anything. It's a beautiful sandwich, full of contrasting textures and colors and flavors. I ordered mine hot, and it was REALLY hot, but there are two heat levels above that: hotter and JAM. Luckily, the heat was packed with plenty of flavor, rather than just overwhelming, sadistic spice. They are wise to offer milk as a drink, and you would be wise to order it. But don't worry, if you don't care for spicy, they have mild and even plain options too. Even in a town with multiple excellent hot chicken options, JAM serves a fabulous chicken sandwich, whether you like it hot or not. (jamhotchickenfl.com)

They have excellent happy hour deals, but I fell in love with the spicy tuna crispy rice on the "cold small plates" part of the menu: cubes of deep-fried rice topped with spicy tuna, avocado, masago, scallions, sesame seeds and a sweet glaze. It came with four pieces, which I split with my wife, but I could have eaten 200 of them, seriously. The light crunch you get from the breaded, fried cubes of rice contrasts so well against the other ingredients — each one is a perfect bite. They're almost too pretty to eat, like all the other options at the underrated Kabuto, but you'll happily eat them anyway. (kabuto-sushi.com)

Brandy Ford's festive food trailer, located at the House on Lang in Orlando's Mills 50 district, serves dozens of flavors of shave ice with homemade fruit sauces. After trying multiple flavors, my favorite remains classic lilikoi, aka passion fruit. In addition to the sweet and tangy sauce, I like my shave ice drizzled with sweetened condensed milk and sprinkled with li hing mui, a dried plum powder that adds a sweet-salty-sour taste to fruit and desserts, similar to chamoy on a mangonada. The texture Brandy gets from hand-cranking discs of ice in her vintage machine is so smooth and soft, it's so much lighter and more refreshing than ice cream. Brandy is also one of the warmest and friendliest people I've met in Orlando, with a really soothing energy. Come visit, order one of these, and you'll feel like you're on a Hawaiian vacation. (instagram.com/hanaleishaveice)